The Vertical Plane by Ken Webster - Is this proof of Time manipulation and travel or just a story?

Its some kind of communication device that is obvious.

I wonder if the creator of the Illuminati Card Game Steve Jackson got his info from a Time Traveler: 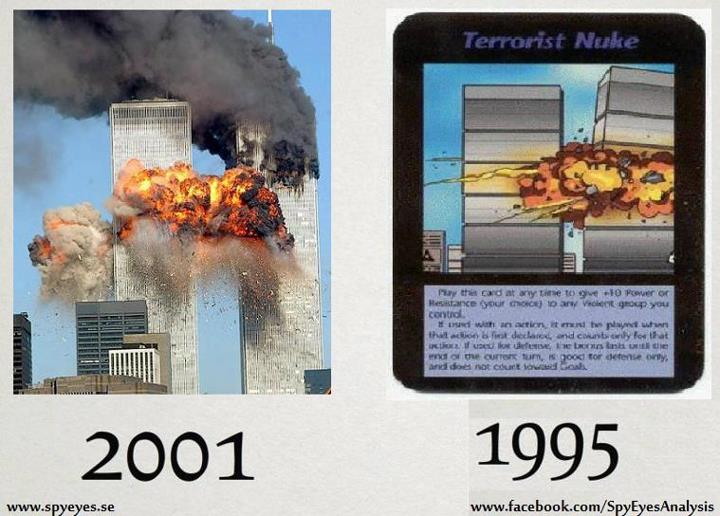 I understand what you mean, it is easy to see numbers everywhere.

I can tell you this has an extreme amount of significance whether you believe it or not, and I think it is just a matter of time before it is explained. In any case I don't think there is any hidden meaning in either chapter, rather it was just a nod to Gary I believe. Obviously I could be wrong and there could be layers inside layers inside layers, but I believe on this point it is pretty straight forward.

Ah no wonder, I hadn't seen that cover. That is quite interesting that Saturn is in the door way.

I am torn on whether it could be significant. First we have to consider that both covers were designed by an artist, as such they aren't necessarily clued in on anything that the author themselves weren't.

However as we can see from the "Printing" mistake of TVP and the reoccuring chapter 7's that 2109 is far from gone in 1989 and even today, and that both covers could have been influenced or manipulated by 2109 even without the knowledge of the person designing it. If 2109 wanted a Saturn on the cover, they could have made sure the artists Mother painted a Saturn on their wall as an infant, sparking an obsession with the planet causing them to put it in everything they created as a signature, only for them to coincidentally be hired for this particular cover. That's how complicated it could be for instance.

So your guess is as good as mine on these matters, maybe better because you have a different perspective. One not carrying a lot of baggage currently. I think exploring all avenues is the only way to find a conclusion either way, I am glad you posted that picture.

I tried to look briefly but I have to leave the house for a while, I am wondering if there were anything significant about the location of Saturn in the years 1984-1987? Like wise if there is something there, when was the last time we saw it before that time period? I hate to try and put this work off onto someone else, but if you get the time see what you can find. Otherwise I will work on it tonight.

Crazy coincidence is it not? Instead of being labeled correctly, it was turned into it's numerological value which just happens to be Garys # and also starts off with a date listing 25 which is the actual chapter # and the inverse. F'ing weird stuff man.

That weird lens is how the entire story bust be viewed. The weirder your lens the better the chance.

originally posted by: sputniksteve
a reply to: dffrntkndfnml
That weird lens is how the entire story bust be viewed. The weirder your lens the better the chance.


Lol, there's humour to be found there.

I don't have the book and am going mostly off our combined efforts here. It's an interesting exercise.

Imo, 25 could be considered 7 on a higher octave, level or however you want to describe it.7 can be considered a number of completion.

Sometimes I wish ATS had spoiler tags, there's a children's joke that goes why is six afraid of seven? The kids spill the beans....

The octave thing is curious.

Idk, that is why I mentioned some confusion earlier.
edit on 12-8-2017 by dffrntkndfnml because: Grammar

posted on Aug, 12 2017 @ 03:12 PM
link
a reply to: sputniksteve
That's funny I have the Deustch version of the book and I never paid any attention to Saturn in the doorway there.
Let's have a look here...
Chaldean numerology was Gary's interest, and the Chaldeans used Saturn for divination more than any other planet.
They called it Ninib or Shamash, and labeled it as a sun.
Western Alchemists called it the black sun.
Greeks called it Kronos. the "He who gives the measures" & " Originator of time" and "The crow god"

I might just post the links here...can't be stuffed typing it all out i'm too tired.
There's interesting stuff on these few pages;
books.google.com.au... &hl=en&sa=X&ved=0ahUKEwiZnOjHvNLVAhXKyrwKHSQRC3wQ6AEITTAJ#v=onepage&q=Saturn%20to%20the%20chaldeans&f=false

I've skimmd through them, the first one is the most interesting and fitting one, but you'll notice they all have their own interpretations, it's pretty abstract.

Makes me wonder if KDP, were going through Saturn Return around the time the events in Dodleston were recounted. I explored my take on this here.

The story line is that they are communicating with a "person" claiming to be alive in 1500's in the same cottage.
Knowledge of planets like Saturn were relegated to myth and legend for public consumption back then, so I'm not sure where there would be common ground to discuss Saturn via a 1984 word processor.
In 1711 Donato Creti painted Jupiter complete with the famous storm of Jupiter.
Probably explained to the public as a mythical witch stirring her kettle till the end of time.
The best glass of the day available to artists like Creti was the telescope owned by a church in Germany.
So the cover art for the German edition of "the vertical plane" probably indicates the house with the word processor was "from Jupiter".
A quick search for the word "seven" in context brought some classic text resources that partially explains the Saturn connection however I'm sure there is more.

As far as I can tell in my very quick search using www.fourmilab.ch...

I just used some pretty random and general dates just to see if there is anything there to even consider. Seems it is worth looking at in detail maybe. Pretty interesting coincidence if Saturn isn't actually related at all considering dffrntkndfnml thread.

Thank-you.The Saturn symbolism seems relevant to the TVP. Like any of the other connections, it's good to take with a grain of salt.

Makes me want to checkout the book, will definitely keep in mind at the used book stores around here. It would be easier to share ITT, having a better scope of the story.

Read everything to catch up. sputniksteve just let me say, this actually isn't that hard. The message "we stop the bullet before you pull the trigger" was very telling.

The way I was told was "we weave the world". The visual I got was "they" move in our gaps, pulling a string here, pushing someone to leave 5 min earlier for work to run into someone, pushing a string there....time is fluid for "them" for the most part altho you can occasionally monkey up their plans by fighting the urge to be the pawn.

If that makes sense to you?

And by pawn I don't mean we're being used, just they live AROUND us and apparently "see more" so can do more.

And while I'm absolutely NOT saying 2109 has been in contact with me, something was and blabbed. The same time I was "told" I was driving home from out of state and right after being "told" I was also immediately told to watch to my left for a wayward vehicle. Sure enough further along a car blasted onto the highway from a left handed entrance ramp and had I been traveling my normal outrageous speed I'd of been T-Boned.

Left handed entrance ramps are NOT common up north here and something unusual to me. I also had never traveled this particular highway so didn't even know it was there. I was actually still pondering the original info so had slowed down since cause i my little pea brain I was figuring "they" said vehicle,but may have meant deer? Hitting a deer was in my opinion much more likely.

The way you have been describing your contact with 2109 reminds me of whatever was chatty that night. And yes they definitely DO speak in riddle form. However to THEM it's actually plain speaking. I will go out on a limb and say (assuming I'm barking up the right tree) they were speaking plainly to Ken, his wife and Gary. The problem for us is we don't have the same correspondences built up thru personal experience so it will sound like absolute gibberish to us.

From what I know communication is tailored to the individual. Had you been there and not, say Ken the message would have probably been much different. Just because you're different. It would actually HAVE to be.

Let me know if any of this is ringing your bells?

Thanks for explaining the t1, t2 stuff. I have always just said "their time isn't our time".
On our end it can appear they are either rushing things or moving too slowly, when in fact they are moving consistently.

It's quite obvious I've never needed more than that easy description. How they do what they do never fussed me either cause it was blatant they play by a different set of rules in our physicality than we do. Not that we can't, we just don't.
Finding out how too tho, did fuss me.

I see you Caver. I'm not as worried about messing up the future as I am of other consequences.

Bell sufficiently rung.
edit on 8/13/2017 by sputniksteve because: (no reason given)

Interesting Caver. Your thoughts about the "others" are mine, though I've not had obvious contact (though some incorporeals might object and tell me they've hit me over the head repeatedly, but I stay too unsure).

I, too, had an "audible" voice tell me to "Stop" when I was about to be T-boned by a stop sign running car... but I have no idea who, what or why it happened and cannot fathom it, unless my passenger was integral to something, I guess.

Anyway, as a casual researcher of weird, I came to the conclusion we are in "their" world and mostly clueless. I get the feeling we are less playthings than students, though... except for the errant a-holes, that is.

Anyway, I suspect much and know zip, fer sure... it is comforting to think some "grownup" is looking out for us, though... though that comforting thought is suspect, too!