China Establishes First Overseas Forces to New Base in Djibouti 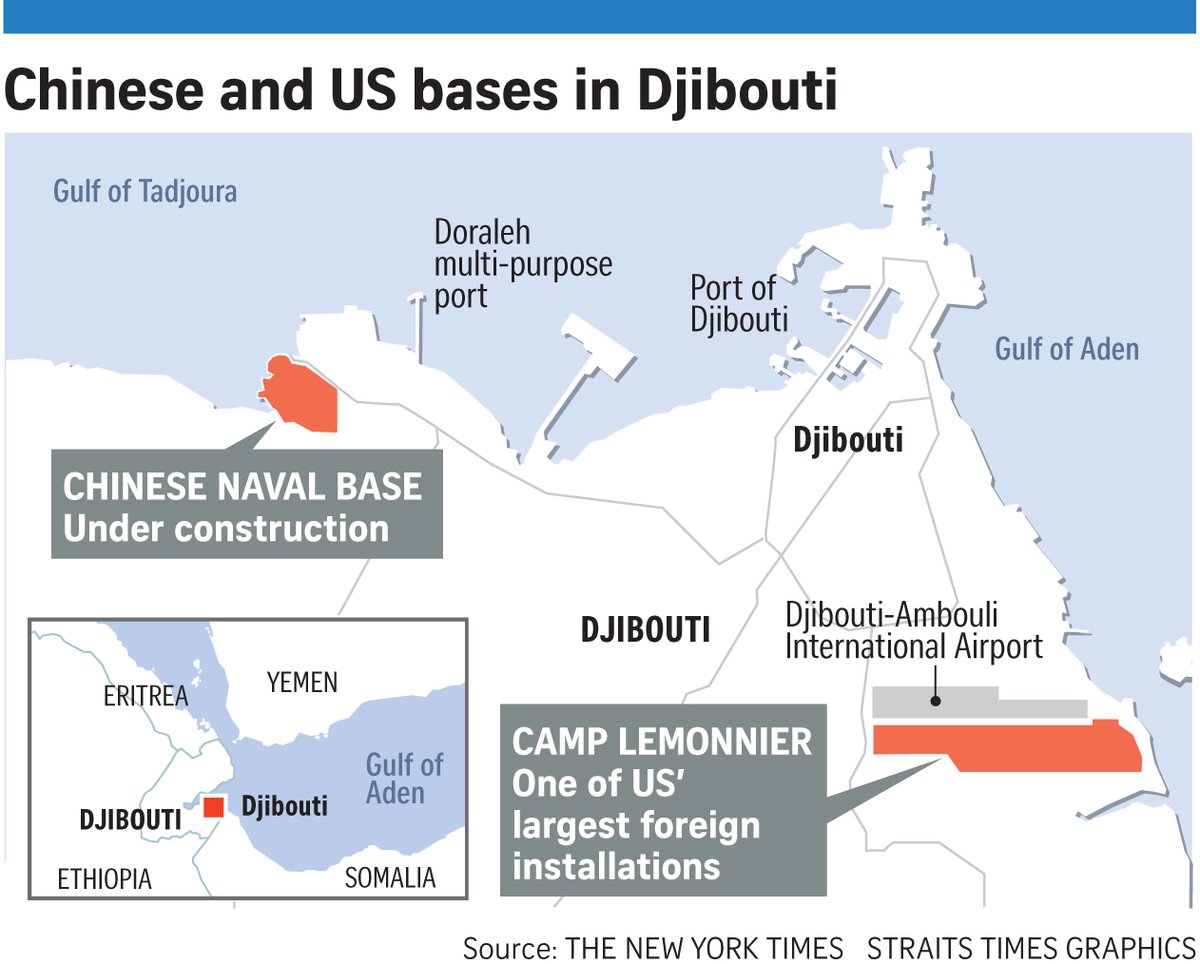 This Horn of Africa state hosts quite a few military powers on its land, and now China is getting in on it. This would be their first official overseas military base, for humanitarian and logistics purposes only of course

Shen Jinlong, commander of the People's Liberation Army (PLA) Navy, read an order on constructing the base in Djibouti, and conferred military flag on the fleets.

The establishment of the PLA Djibouti base was a decision made by the two countries after friendly negotiations, and accords with the common interest of the people from both sides, according to the PLA navy.

The base will ensure China's performance of missions, such as escorting, peace-keeping and humanitarian aid in Africa and west Asia.

The base will also be conducive to overseas tasks including military cooperation, joint exercises, evacuating and protecting overseas Chinese and emergency rescue, as well as jointly maintaining security of international strategic seaways.


Now there does lie an issue with Chinese money impeding our interests there as well. This base will be only a few miles from one of our own, and the government in Djibouti even forced us to vacate a secondary base recently because China invested more money in the way of $3 billion railroad project. Whereas the US and allies traditionally simply pay off the politicians themselves with money, China does it in a way that benefits their whole society, not just the greedy politicians. I think if the US wants to compete for influence in the 21st century, we will have to adopt similar mutually beneficial policies as well.


PressTV
China's military base in Djibouti will be established just a few miles from Camp Lemonnier, a decision that Washington says would raise "security concerns."

In August 2015, Djibouti had reportedly ordered the US to vacate its secondary Obock military base in the country in a bid to turn over the installation to the Chinese military and its contingent of 10,000 troops.

The US Defense Department reportedly paid Djibouti nearly $63 million per year for the use of the Camp Lemonnier military base. However China, reportedly offered Djibouti a far more generous offer, namely the completion of a $3-billion railroad project from the Ethiopian capital Addis Ababa to Djibouti.

The West is concerned that closer ties between Djibouti and China may prompt the African country to impose restrictions on US access to the Camp Lemonnier base, which the US uses to collect intelligence on terrorist groups in the region.


The key motive for so many military powers such as France, Japan, Saudi Arabia, USA, China and more is the location and proximity to the Bab al Mandeb sraight which links the Mediterranean and Red Seas to the Indian Ocean through the Suez Canal. As well, it is a very centralized hub for multiple anti-terrorism ops and UN peacekeeping missions in Africa. The imortance of this cannot be understated, especially with a direct rail line now linking Djibouti's capitol with that of Ethiopia's. 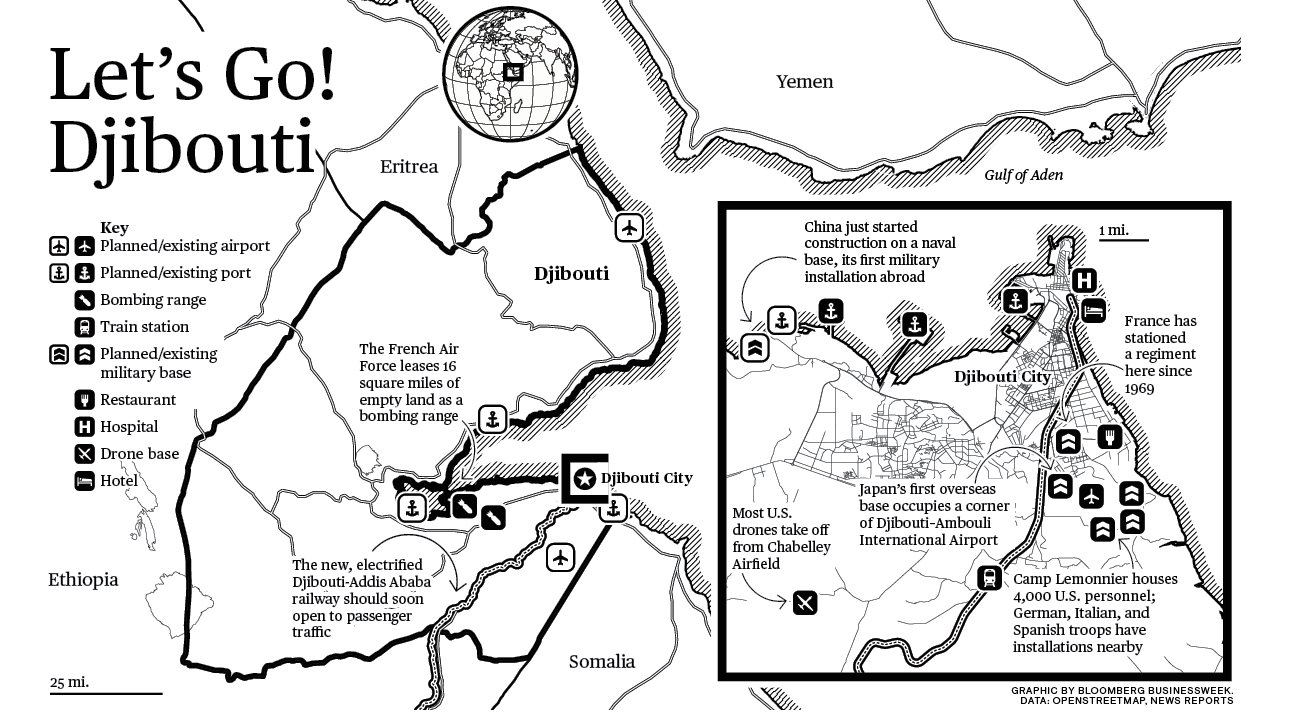 The Pentagon even believes China is looking towards a base in Pakistan, who is that country's largest supplier of arms! They have already agreed to build a drone factory in Saudi Arabia as well.

The Chinese Dragon is now fully mobilized for expansion into the world, and it is going full steam ahead! Eventually down the line, it may not be so unthinkable that China, the USA, and Russia may in fact cross a path that will lead to confrontation and/or conflict. Be vigilante people, these actions can have consequences.
edit on 7-12-2017 by worldstarcountry because: (no reason given)

posted on Jul, 12 2017 @ 01:31 PM
link
It doesn't surprise me in that US politicians and media are so focused on political theater that China, Russia, NoKo and others actions can slip by unseen.

And don't think that US in fighting is not seen by these countries. If we don't stop it danger is coming fast.

Ya no kidding, if there was some real estate available for a base I am surprised that the US didn't throw up another base.


According to this report, the U.S. has 662 overseas bases in 38 foreign countries, which is a smaller number than the 900 bases Paul cited.

They had two bases, but the government decided China pays better, and the land of the smaller one which I believed housed a drone fleet went to China. They simply relocated the drones. We run much of our support missions for the Somali National Army and AMISOM against al-Shabab out of these bases in Djibouti.

Also, I could swear Djibouti used to have an H in it, Djibouthi ?? Am I Mandela effecting, or just imaging it??

posted on Jul, 12 2017 @ 01:52 PM
link
I was stationed in Djibouti back in the early 1980`s. Its a very strategic point in East Africa. Cutting off the access to the Indian ocean. It was very under developed back then, so the rail way is a brilliant idea. Kudos to the Chinese. No mandella effect it was always spelt Djibouti.
edit on 12-7-2017 by illuminnaughty because: (no reason given)

And we are dumping even MORE in the military. Out of control spending on a jet and a boat, we are soon to be in hock. Sooner or later the petro dollar will not be able to be secured with an arms deal.

I'm not surprise since they have plans to put Chinese troops in Manila, Hanoi, etc.

This base will be only a few miles from one of our own, and the government in Djibouti even forced us to vacate a secondary base recently because China invested more money in the way of $3 billion railroad project. Whereas the US and allies traditionally simply pay off the politicians themselves with money, China does it in a way that benefits their whole society, not just the greedy politicians. I think if the US wants to compete for influence in the 21st century, we will have to adopt similar mutually beneficial policies as well.


There it is. The difference between foreign policies, we can subjugate peoples, attack their country, behead their leaders or work with them... help them realize their goals.

Think the US gets it?

posted on Jul, 12 2017 @ 02:34 PM
link
China wants to be the new colonial power in Africa.
This may well set off a new cold war over resources on the dark continent.

originally posted by: seasonal
a reply to: Asktheanimals

I think the intent of the TPP was to find another source of slave labor so we keep the cheap goods flowing. If people didn't like TPP, just wait until the cost of imports goes through the roof. Then everyone will want something that's TPP-like as long as it's not called Obamacare (err... I mean TPP).

posted on Jul, 12 2017 @ 03:04 PM
link
China is betting big on the raw materials they can get, and even bigger on the fresh water they will be able to steal.

No surprise I expect in coming years we will see more and more bases pop up in Africa.

If costs of product go up, they will be made here.


Keep in mind the true cost of products are hidden. They are hidden in environmental damage-and slave labor.

posted on Jul, 13 2017 @ 06:57 AM
link
Strictly speaking, the first overseas military bases were the militarised artificial Islands they have been constructing in the South China Sea.

posted on Aug, 1 2017 @ 12:40 PM
link
a reply to: paraphi
China formally opened its first overseas military base on Tuesday with a flag-raising ceremony in Djibouti in the Horn of Africa, the same day as the People’s Liberation Army marks its 90th birthday, state media said. 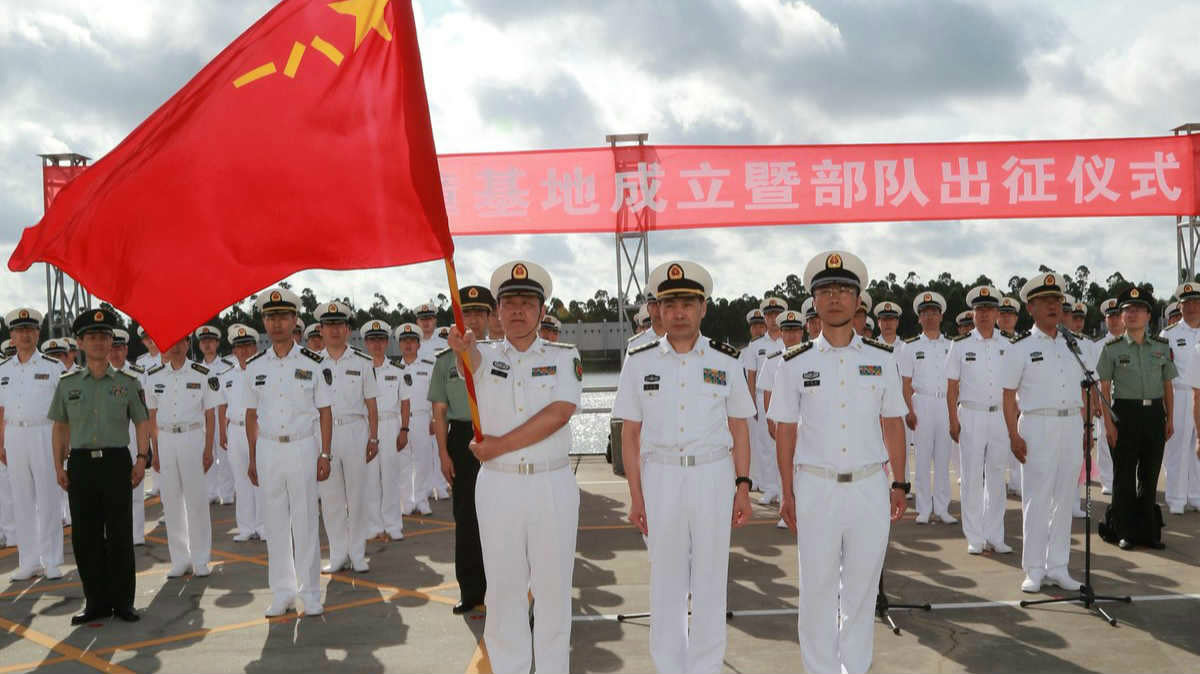 Stratfor has released some satellite images and an analysis of China's base which still has some construction but is already functioning and doing its thing. 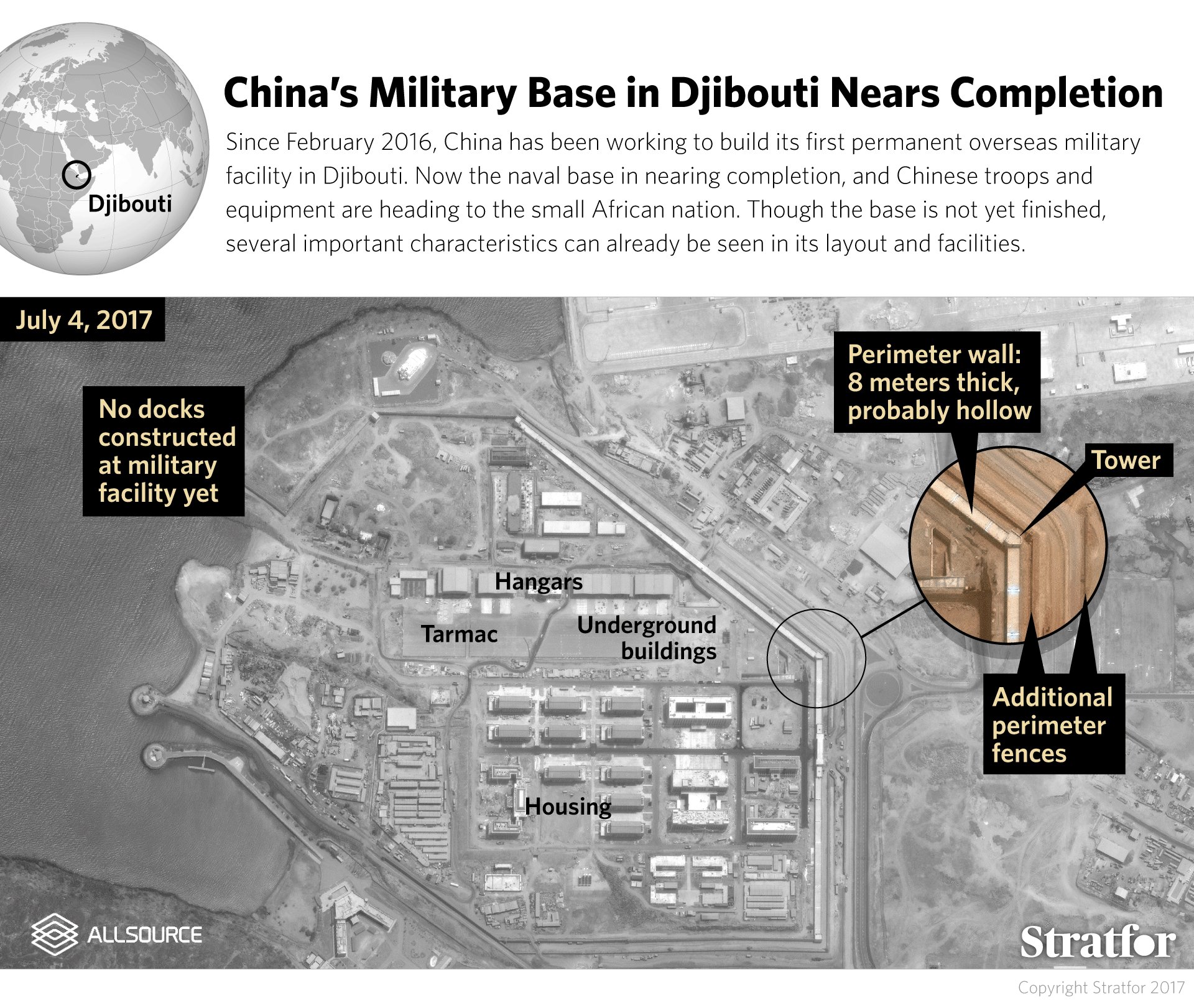 originally posted by: Asktheanimals
China wants to be the new colonial power in Africa.
This may well set off a new cold war over resources on the dark continent.

Already happening. China and India, in fact all the bric nations are investing and have invested there.

Those countries middle classes need cheap production countries like we use China.

posted on Aug, 3 2017 @ 01:28 PM
link
I just saw and saved these in a thread about Chinese ABM launch. From a pilot on a cargo transport, and one from the ground. Where did that thread go??
It was dated like July 29 I think the article it pulled from. I hit subscribe, but its not even in my list where it would say trash bin. I think the Chinese hacked it away! 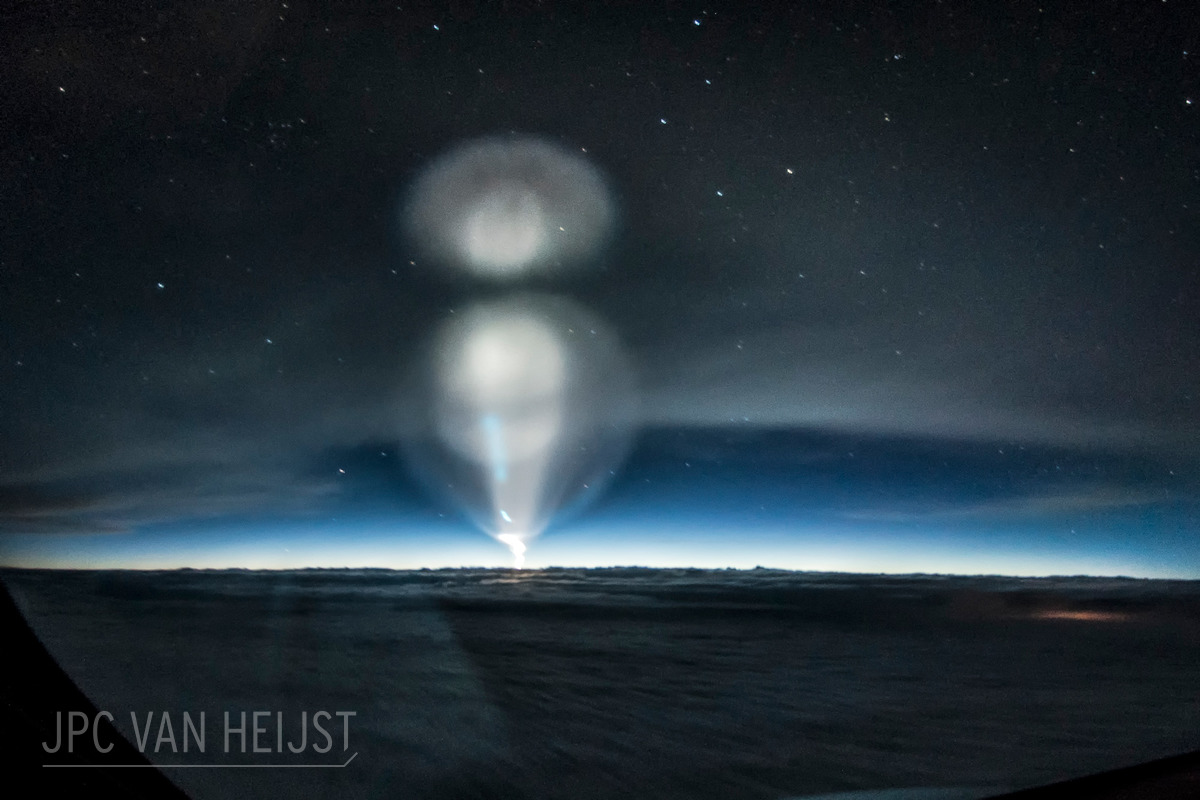 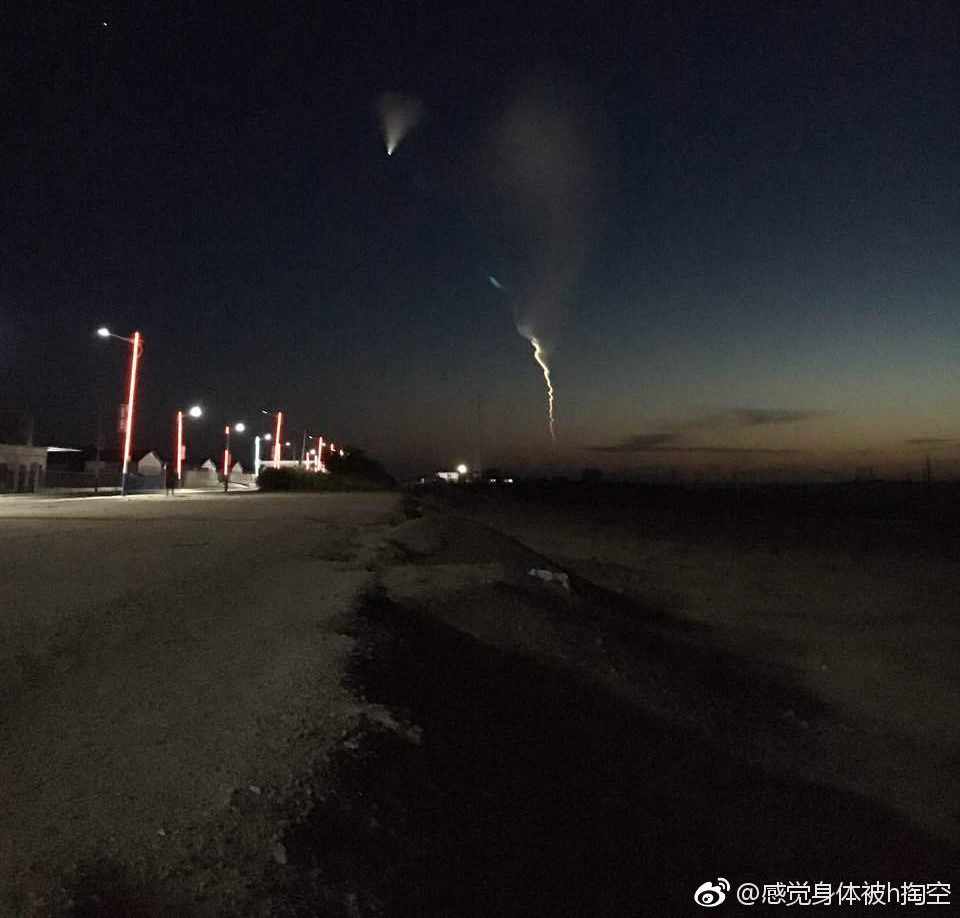 
The training was designed to examine the garrison's capacity of comprehensive weapon application and completing diversified military tasks in an environment of high temperature, high humidity, high salinity and high levels of radiation.
"This live ammunition drill is the first time that our officers and soldiers stationed in Djibouti walk out of the camp to carry out a combat training. It is also an important part of the 'month with guns' activity held by the base. The live ammunition drill will help explore a new training model for our overseas garrison."