This has all been sensationalized by the media to do maximum PR damage.

The entire event itself just proves that there were active entrapment operations going on against people in Trump's orbit to tie them to Russia under false pretenses.

originally posted by: DAVID64
a reply to: Kali74

When they say "of value" they are talking about monetary value, right? Money, vacations, cars, etc.. yes? Does just information on the potential wrongdoings of a political opponent count? If you and I were in the same political race and I got dirt on you from a source, does that count? It would seem as if as long as it wasn't something like insider trading sort of thing, it's not illegal. They weren't given anything of monetary value and/or didn't stand to gain monetarily from the information.
Do I have this right? Somebody get me a lawyer.


NOPE. It could INTEL or favors.

I do not know
I do know if all politicians were held to this standard we would have some unemployed politicians.
I do know contributions and donations are defined in that statute. Dirt on an opponent is not.
Also I looked for case law for this and found no cases.

I thought about that and am remembering Dan Rather, where the Bush admin put out a fake paper, and he reported on it, without verify it, and it destroyed his career.

Now the question is this: if it is the real thing, and knowing that there is an investigation into the campaign by a special prosecutor, why release it to the public? It only gives the special investigator more evidence to present to a grand jury and or bring and use against Trump Jr in any court. As it does show intent, and it makes Trump jr look very bad and the places more doubt on the entire administration, and those who support it who are in congress.

However, what I do believe is that it is a fake, that Trump Jr released to make the news look foolish and turn around and can point to as being fake and that they are promoting it to the public.

So the question has to be is this real or is it a plant and gotcha to get the news to look bad.

This is intent to expose a crime.

The difference is night and day. Anyone who refers to this in a simply political context is being facetious.

originally posted by: sdcigarpig
a reply to: mkultra11


Is intent the Never Trumpers, The DNC via FusionGPS soliciting and paying for a dossier from foreign agent who identified his sources as “a senior Russian Foreign Ministry figure,” a former “top level Russian intelligence officer active inside the Kremlin,” a “senior Kremlin official” and a “senior Russian government official”? Then giving it to the FBI who used it as a roadmap for their investigation.

How's that over some inconsequential meeting with some "Russian" lawyer that amounted to nothing with still nothing even remotely close to what I mentioned above. Oh yeah, that's different it wasn't Trump.

Here is the thing about this, is that it does reveal an actual crime with it comes to Trump jr.

The main issue that keeps coming up with the Trump administration and all of those who are close to the president, is the fact that they are disclosing ALL of their private meetings with anyone, especially those who are from Russia and other governments. Now missing one meeting on the (SF-86) form, can be a slip of the memory. However, it is coming out where Trump Jr, and several others are having to go back and add in more and more meetings that they had. And it is very clear that if you leave out, or fail to disclose, or intentionally lie about stuff like meetings with foreign officials or various others who are from a foreign country with connections to various governments, is punishable by 10,000 dollars in fines and up to 5 years in prison.

One is a simple error, easy for anyone to claim, however, 3 or more, and having to redo the exact same form more than once, may be a bit more to believe it is someone is deliberately leaving out information. And now the question is why?

Wrong. If Trump Jr took a trip to Moscow and chatted up with a Russian hooker for half an hour during the 2016 election, he does not have to report the meeting on a form. Natalia is not connected with the Russian government, they did not discuss the campaign, so there was no need to report it.

If Trump Jr, took a trip to Moscow, he would require a visa and in that visa, he would have to state his reason for wanting to travel there. And that reason would have to be disclosed, when going for a security clearance. Included in that, would be in general if he met anyone, their names and positions, along with the nature of said meeting.

When one applies for a security clearance, they undergo a background check, the higher the level, the more detailed the check is and has to be. In that, it goes into criminal, financial and all contacts that the person has, both domestic and foreign. All business associates would have to be disclosed and any travel to a foreign country.

Now had Trump Jr, not be in a position and just stayed with the family business, then this would probably be a 2 week headline and then nothing of it. However, as he is in the White House, as an advisor, he has to disclose and be a part of the investigation, including his hook ups with hookers.

And before you ask, I have had to go through the exact same thing 3 times in my life, twice in the military and once when I went to work on a military base.

originally posted by: Kali74
a reply to: hounddoghowlie

A lot of people seem to be confused as to what's possibly illegal about that meeting. The purpose of the thread is to discuss that, drawing from a base of legal experts.


Oh, like the 97% of scientists that say al gore is real?

Or the 4 out of 5 dentists and doctors recommend...., claims?

Isn't that a fallacy? Like "appeal to something or other?"

...it may be best to let Jr. play with some more rope.

But but but but but Ante's thread yesterday hailed this blurb as the gospel, the ultimate revelation that proves once and for all that Donald Trump is a treasonous capitalist swine, or something like that.

EDIT: I LaDooshed and only noticed the last sentence. I didn't notice this part:

I reached out to 17 legal experts and asked them these questions directly. Twelve said that the case for collusion and conspiracy is near conclusive, though it’s not entirely clear what the legal consequences will be. Five experts believe the circumstantial evidence is damning but we don’t yet know enough to draw any conclusions.


What's funny is that all 17 concluded that there was impropriety... I do see where you replied and retracted the statements in this post but damn.... you're jumpy.

Just like the 17 Intel agencies who said Russia hacked the election?

What's your point? Russian hacking to influence the election has been confirmed and even addressed by Trump. Your vague comments make no sense so if you'd care to respond in complete sentences it might go a long way towards making yourself understood.

That it means nothing and it's misleading. One can find 17 others that say there's nothing wrong. It's the typical leftist consensus argument. It was never 17 intel agencies and all along it was completely wrong and the democrats and media knew it. It's not even conclusive that "russia hacked the election" and there no evidence whatsoever that whatever they did or attempted had any effect.


One of them lies and 16 others swear to it. 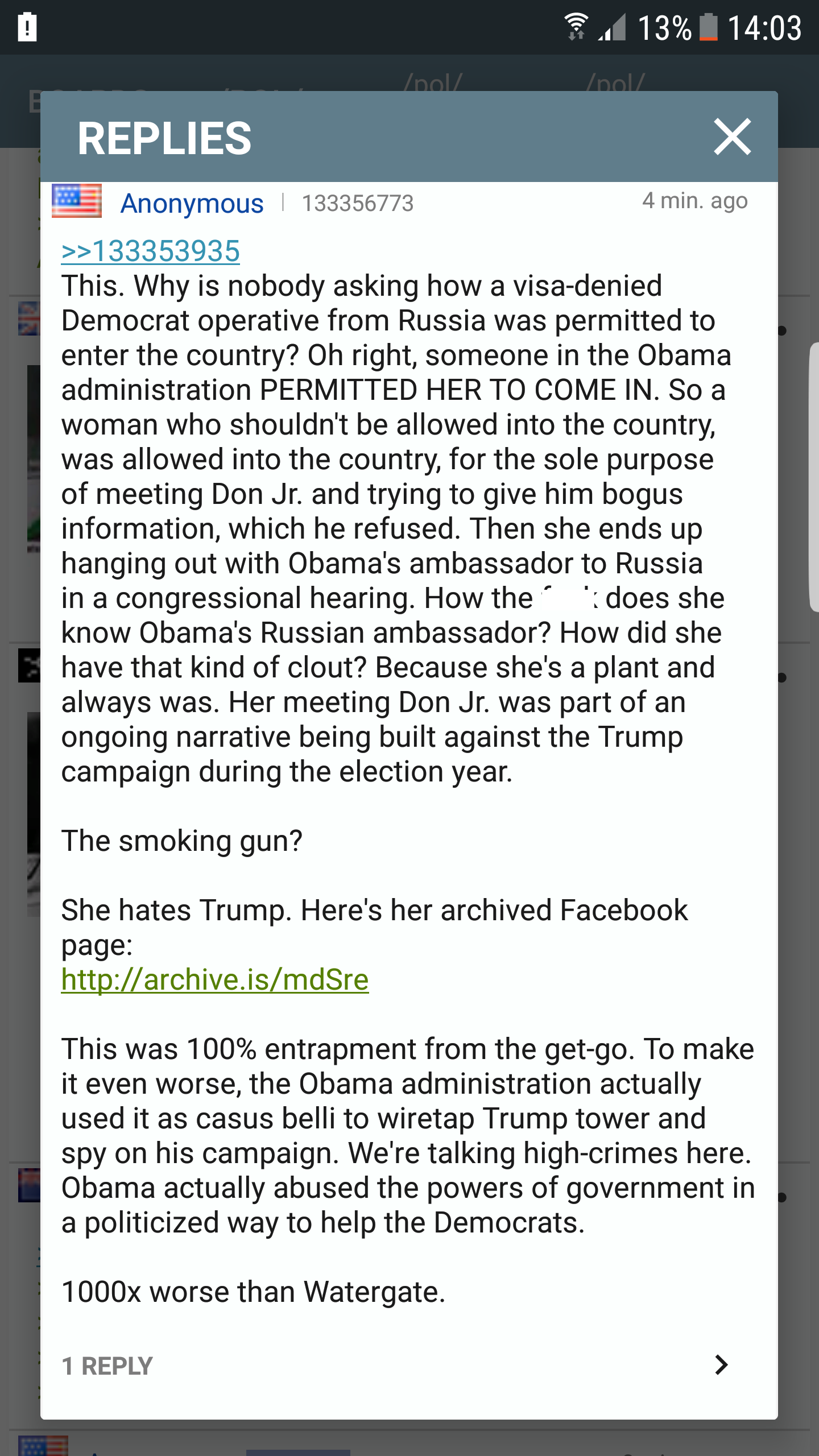 This is just typical. An initial onslaught of false news started by an anonymous leak followed by the usual traitor, impeach talk in the media. The the entire story gets destroyed and find Democrat wrongdoing. Then it's swept under the rug until the next leak.

If you have a list of the lawyers and their political affiliations you should produce it. I'm curious myself.
edit on 12-7-2017 by vonclod because: (no reason given)

What's their opinion of the Democrats soliciting information on Trump from foreign sources, including the Kremlin as a source?

originally posted by: allsee4eye
If Natalia had damaging info on Hillary, she would have sent it to the MSM, not to Trump Jr. Hence, this was a hoax and nothing will come of it.

The Russian lawyer who penetrated Donald Trump’s inner circle was initially cleared into the United States by the Justice Department under “extraordinary circumstances” before she embarked on a lobbying campaign last year that ensnared the president’s eldest son, members of Congress, journalists and State Department officials, according to court and Justice Department documents and interviews.

This revelation means it was the Obama Justice Department that enabled the newest and most intriguing figure in the Russia-Trump investigation to enter the country without a visa.

She also engaged in a pro-Russia lobbying campaign and attended an event at the Newseum in Washington, D.C., where Russian supporters showed a movie that challenged the underpinnings of the U.S. human rights law known as the Magnitsky Act, which Russian President Vladimir Putin has reviled and tried to reverse.