Correction...she posted photos of pro-abortion signs from the march. Not sure if she was actually there.

HERE is a link.
hiddenamericans.com...

There are some deep,connections to some very sketchy NGO's.
that link back to Soros and Democrats.

She is obviously (as we see it now) a trap, a honey pot.

Here's some more information on our girl:


There are two names again, Rinat and Simpson of GPS.

So that proves GPS is acting on behalf of Russia.

This is so twisted!

originally posted by: Asktheanimals
So it's not even a Russian narrative is it?
It's a Ukrainian narrative.
The stink from Poroshenko still lingers along with Nuland and all the US State Department's dirty dealings and election fraud in foreign countries.
Hillary's prints are all over this one as well as Obama's.
I think they tried their best to make the Ukraine the flashpoint for starting up WW3 but Putin wouldn't take the bait.
The Ukraine is literally the land beyond the pale.
Look it up, it will make sense once you do.


So this is starting to tie back to the very real collusion between the Ukrainian government and the Clinton campaign? If that's true and it gets dug up, expect the Trump Jr. flap to die a sudden death in the press.


originally posted by: Maluhia
a reply to: ketsuko

Of course, McCain has already been linked to the famous "dossier"


More than linked - he handed it to the FBI and was the agreed contact for Steele.

Was listening to Rush on my way home. He reports that there is a picture of Veselnitskaya in McCain's office on her facebook page. Someone might want to cruise over there and see if that is true. Rush also reports there is another person in that photo he didn't recognize, but someone here might.

Yeah - she's ceased to be the issue since her ties to Fusion GPS and Obama were uncovered...

FusionGPS is a for profit company that has clients. They don't care who their clients are or what their interests are. They are hired/contracted to find dirt. That's what they do. They're going to hire the best people to do that, for whatever job they're working on.

But, like I said, this isn't about her, although her "adoption shctick" can easily be seen through, and we all know that she was offering the Trump Campaign dirt in exchange for dumping or relaxing the Magnistsky Act. This is about Emin and His dad and their ties to Putin.

originally posted by: rexsblues
What do we have here....

Hmmmmm, wonder if any of those weapons flights happened to have landed in Tripoli or Benghazi?
You may have uncovered some deep stuff.

If anything, someone wanted to find out who was part of Trumps campaign.


So what? She's a lobbyist. She meets with all kinds of politicians to push her Magnitsky agenda.

posted on Jul, 12 2017 @ 02:05 PM
link
Looks like this woman was a plant. It also looks like this was the springboard for Obama's wiretapping and FISA warrants.

Lmao. This is how this played out:

QUICK! WE NEED DAMAGE CONTROL! The Gateway Pundit publishes a picture of Natalia Veselnitskaya sitting behind Ambassador McFaul and claims she is "sitting with" him from which you further spin to "working with."

Throw in a vague, unsourced allegation from a Trump lawyer that Veselnitskaya is *somehow* tied to Fusion GPS and presto! A bulls# distraction.

Natalia Veselnitskaya is not an unknown person and she's certainly no friend to the Obama administration. And she could care a less about "Russian adoption."

This is the FAKEST "fake news" of the day.

Veselnitskaya represents Denis Katsyv, a mobbed up son of a Russian official (his father is VP of the Russian state-owned railways and a former deputy governor of Moscow) and his interests. Specifically, she represented his company, Prevezon Holdings who Preet Bharara drug into court because they were laundering money (and buying expensive NY real estate) from the $230 million tax fraud case uncovered by Sergei Magnitsky who was then assassinated, resulting in the sanctioning of 44 Russians.

I don't even have to watch the video to know why she was there. Veselnitskaya spends a good deal of her time lobbying against the Magnitsky Act. June of 2016 is when the anti-Magnitsky film The Magnitsky Act — Behind the Scenes premiered.

You're ok at it, but not as good as sillyolme.

This is going to help fuel the many many other fires the left has burning under their behinds .


Interesting take. This is beginning to look more and more like an operation by Ukrainian operatives linked to the DNC in an attempt to set up the Trump campaign and win Hillary the election. They wanted Hillary in place because she was favorable to the Ukraine, even though she was also favorable to Putin and the Russian oligarchy.

Following up on this:

I almost forgot, the website for Hermitage Capital is showing an under construction page, the whois shows it was registered in 2000, updated on 03/05/2017:

archive.is has several pages backed up, one in particular has some interesting info:

In February 2008, Boily acquired the three Russian investment vehicles – Rilend, Parfenion and Mahaon – that were previously stolen from HSBC. Shortly after acquiring these vehicles, Boily filed for their liquidation. HSBC, together with Hermitage, filed a lawsuit with the BVI Court requesting an immediate injunction against Boily’s attempt to liquidate the vehicles.

Here we have HSBC involved yet again with a company (Hermitage) which is found to have been involved in money laundering.

Add this to everything else and what does it give us?

Going further back we find this HuffPo interview will Bill Browder (who also shows up in Veselnitskaya's facebook photos), who seems to be very hawkish against Russia.

On March 5, 2015, the CEO of Hermitage Capital Management, William F. “Bill” Browder made a speech at the Oxford Union describing his personal experiences investing in Russia, the death of Sergei Magnitsky and the kleptocratic nature of Putin’s regime. Browder was the largest foreign investor in Russia until 2005, when he became blacklisted from Russia as a “threat to national security.” He has since emerged as one of Putin’s most strident critics, and a prominent human rights activist, after the death of Hermitage’s lawyer and auditor Sergei Magnitsky in 2009

Hermitage has since been found to have been laundering money out of Russia, Sergei exposed the laundering and is killed. The case is settled quietly before the investigation can be completed.

I smell a cover up

Now, to the guy with McCain: 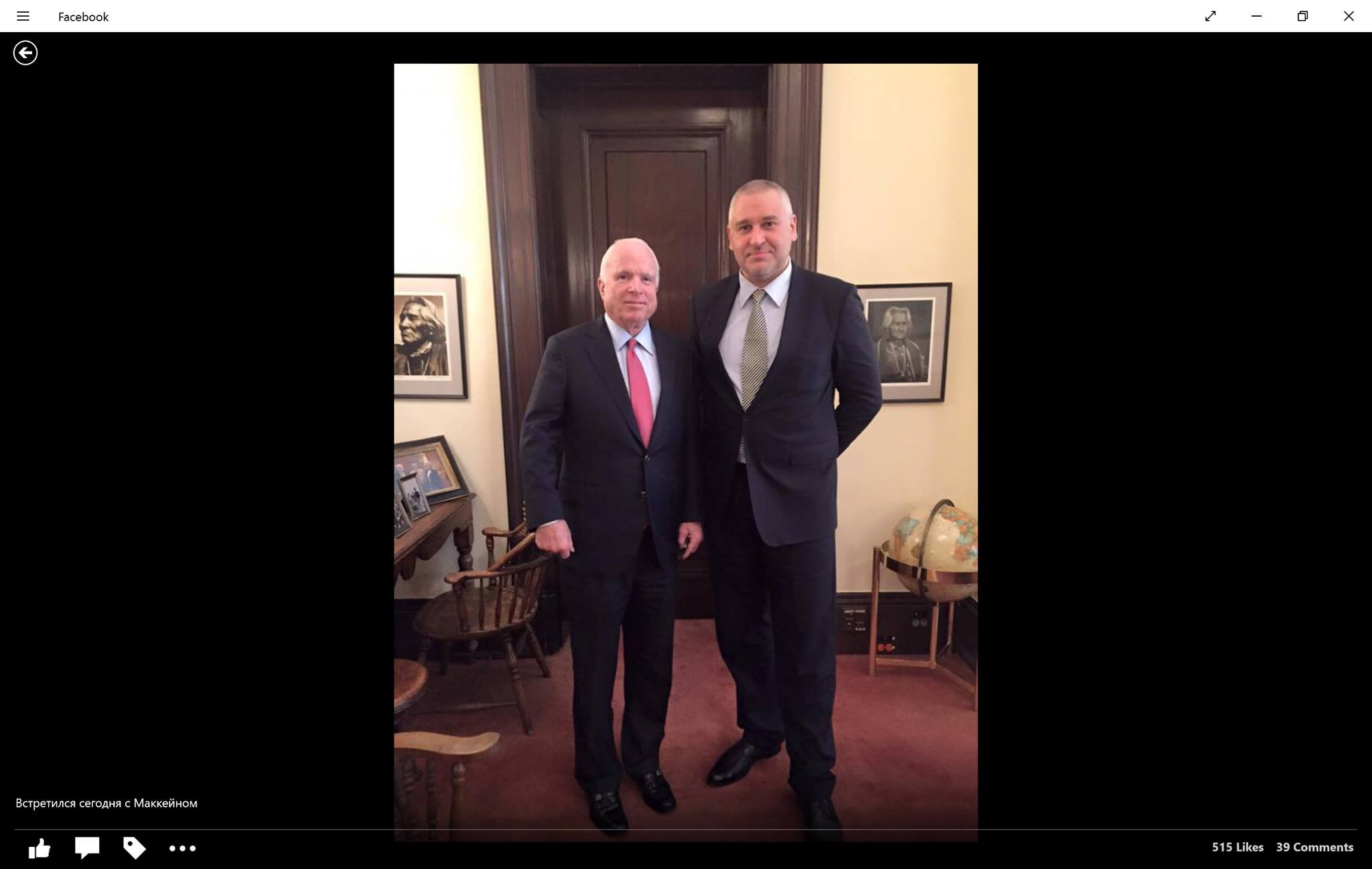 He looks to me a lot like the guy (top row, second from the right) in this picture Maluhia posted:

At least to me. Find out who that is and perhaps we know who McCain was pictured with.

edit on 12-7-2017 by jadedANDcynical because: added HSBC info

My mistake. She is not in the picture, yet McCain tweeted the same
picture and said

Thank you for the posts and video.

This is bouncing up in the news today.
on Drudge and Sean Hannity covered it,
as well as Rush.

It is going to be impossible to make this go away now.

How many millions have heard about it already!