Put it all to bed


Likely just you since you seem to have left out the Lynch/B. Clinton summit, the Lynch “don’t call it an investigation”, etc., etc., etc. BTW, only POTUS can’t be tried while in office. If there was ANY actual evidence, don’t you think there might be some indictments/arrests by now?

posted on Jul, 11 2017 @ 04:33 PM
link
The closest thing to "collusion" that actually exists as a crime is criminal conspiracy. But, there has to be an actual conspiracy. Conspiracy requires planning. The only plan seems to be one to set up Trump's son.

The NYT had copies of the emails and had asked for comment before releasing them. He did it himself to get out ahead of their story and to take a stab at controlling the narrative.

Trump Jr. Was Told in Email of Russian Effort to Aid Campaign

If the emails hadn't been released, it would be screeches "fake news" from the Trumpologists (and hell, some of them are screeching it anyway). Once more the media has been right, exposed the lying of a prominent figure in Team Trump and forced their hand.

Why do you keep trying to defend these lying scum? I don't get it. I can get hating Clinton — hate away, she's a power mad liar too — but why pretend that Donald Trump is anything but what he is? A lying, corrupt, globalist oligarch crony. What makes him worse imo (other than being an unhinged compulsive liar who can scarcely tell the truth) is that he has so many people snowed into believing he's somehow the exact opposite of what he is. They chant slogans designed to appeal to their delusions like "drain the swamp" even as he fills it right up with Goldman Sachs VIPs, billionaire buddies and all his other crony appointments.

They buy his bulls# about radical Islam as he's kissing Saudi rings. They argue that he's a non-interventionist as he pledges to feed the military industrial complex.

He's everything bad that anyone could say about Hillary Clinton but WORSE on every single count. Then there's the fact that he's a clownish, uncouth, ignorant, hatemongering con man who can't get through a sentence without a least one lie, randomly throws s#fits on Twitter and has no actual desire to do the job of being president.

But he says he wubs you biggly.
edit on 2017-7-11 by theantediluvian because: (no reason given)

posted on Jul, 11 2017 @ 04:39 PM
link
a reply to: theantediluvian
This is just my opinion but from my vantage point all the dino media have been pushing for the last year is how Russia used funding/memes/bots/RT/wikileaks/etc to influence the masses into voting for Trump. This seems to be all they have left because there is still to this day zero proof that voting machines were compromised.

If the Russians were so sure that their "brainwashing powers" would be so effective (despite the leftists media actually brainwashing people into loving Hillary... but I digress), then why oh why would they even attempt to provide dirt about the Clinton campaign directly to Trump's son of all people?

This was very clearly a set-up and because of this, I can't understand how anyone could believe the source is even legitimate in saying the Russian government supported Trump. This is probably the reason why Trump Jr decided to just release everything out in the open for clarity. There is too much fake garbage being produced that it's tough to know what is true and what is false. There are lies on both sides on an issue that seems irrelevant.

Winning? you all just lost. 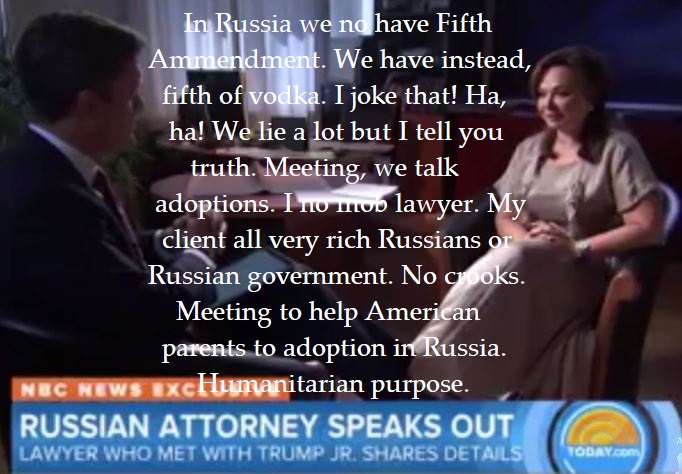 posted on Jul, 11 2017 @ 04:43 PM
link
Here you go.....yeah yeah...it's Fox News, what can I say?
I don't read from any hysterical Leftist so called "news" outlets.
But anyway, this is the most level headed explanation of this story by Gregg Jarrett I have seen yet.

Erasmus, the noted classical scholar, described lawyers this way: A most learned species of profoundly ignorant men. He had a point. How else do you explain the wild pronouncements of lawyers like Harvard Law Professor Laurence Tribe, former White House ethics lawyer Richard Painter and Senator Tim Kaine, D-Virginia? Each have suggested Donald Trump Jr. committed treason by meeting with a Russian lawyer, Natalia Veselnitskaya. All three lawyers earned their degrees at Harvard or Yale.
Yet, they appear to have slept through their class on constitutional law.

Now, amid the cacophony of claims that the Trump campaign committed the criminal offense of “collusion” with the Russians, no one has managed to point to a statute that makes colluding with a foreign government in a political campaign a crime.
Why? Because it cannot be found anywhere in America’s criminal codes.

There is one final law to be considered. Under the Federal Election Campaign Act, soliciting and/or receiving foreign donations is prohibited (11 CFR 110.20). This includes “money or other thing of value.” Is information, by itself, a “thing of value?”
One could attempt to make that argument, but it has never been interpreted that way. Moreover, campaign election laws are rarely the subject of criminal prosecutions. The vast majority of cases are civil violations resulting in fines. But again, both Trump Jr. and the Russian lawyer agree that no information related to the presidential campaign was conveyed.
If true, this statute is inapplicable.
As much as President Trump’s opponents may wish it to be, it is not a crime to meet with a Russian. Nor is it a crime to meet with a Russian lawyer or government official. Even gathering information from a foreign source is permissible. Unwise and ill-advised, yes. Illegal, no.

He released it because there was no hiding it, not because he's honest. If he was honest, he wouldn't have been lying all the way up until he had no choice.

It's the same thing that happened with lying Mike Flynn who lied lied lied until he couldn't lie anymore and then the scumbag Commaderp-in-Chief let him resign and his trolls tried to spin it that he was taking "descisive action" but no, he was just backed into a corner with no more room for lying.

So you think If the reporter had never written the story Jnr would have released his emails?.
Mahahahaha If you do you're an idiot.
He got found out and like anyone knows it is always best to release your scandal then let another release it.
edit on 11-7-2017 by testingtesting because: (no reason given)

originally posted by: testingtesting
a reply to: Perfectenemy

So you think If the reporter had never written the story Jnr would have released his emails?.
Mahahahaha If you do you're an idiot.


Sexton sat a year on this story and i wonder who told him to withhold the story for so long. Do you care about that at all?

posted on Jul, 11 2017 @ 04:51 PM
link
All the better to come forward now with the truth
than to be squirmingly 'found out' later on
I'll give Trump the Younger credit for that at least

Never the less...
intention
edit on 11/7/17 by Damiel because: spacing

He was making sure it was all correct it can take many months to fact check and with a hurried story without all the facts you lot would just call it fake news.

posted on Jul, 11 2017 @ 04:53 PM
link
a reply to: theantediluvian
Questions real journalists should be asking: What statute did Don Jr violate? What are the elements of the statute and what are the proven facts that satisfy those elements? How has the statute been applied in past cases, and are those past cases distinguishable from the current situation. It seems only Fox is doing this...


Until somebody somewhere provides sufficient answers to the above, this is a non-story. Most likely an attempt by the NYT to simultaneously re-inject life into the Russia hoax and divert attention from news concerning Comey's potential illegal activity.
edit on 11-7-2017 by birdonwire because: (no reason given)

And from a legal standpoint this is the point I was trying to make by attempting to walk people through how to make a legal argument. There isn't anyway to make such an argument that a judge could take seriously...Well except maybe the 9th circus =P

Nice attempt to shoot the messenger though.
Would you have preferred for the story to never exist? to not know about this? to continue walking around with Trump coloured glasses on (Brown btw) or do you want to get to the truth?.
edit on 11-7-2017 by testingtesting because: (no reason given)