posted on Jul, 10 2017 @ 03:16 PM
link
If this was really about adopting Russian children...what were the Trumps planning to do with the children?

originally posted by: olaru12
If this was really about adopting Russian children...what were the Trumps planning to do with the children?

I thought Donald Trump jr. Was tricked into that meeting with fake information on Hillary, at which time the lawyer brought up Russian adoption needs.


I thought Donald Trump jr. Was tricked into that meeting with fake information on Hillary, at which time the lawyer brought up Russian adoption needs.

You lift sanctions, and WE give you dirt on Hillary.

For all intents and purposes any discussion of adoption in this context is a cover for other issues. The main bone of contention is the Magnitsky Act, signed into law by President Obama and designed to punish Russian personalities and business interests connected to the death under suspicious circumstances of Sergei Magnitsky.

In June 2012, the United States House Committee on Foreign Affairs reported to the House a bill called the Sergei Magnitsky Rule of Law Accountability Act of 2012 (H.R. 4405).[3] The main intention of the law was to punish Russian officials who were thought to be responsible for the death of Sergei Magnitsky by prohibiting their entrance to the United States and their use of its banking system.[4]

Natalia Veselnitskaya is a well connected Russian lawyer and lobbyist tasked with trying to get the Magnitsky act repealed. The Magnitsky Act was a well aimed shot at the Kremlin by the Obama administration that really incensed Vladimir Putin, who retaliated by cutting off American adoptions of Russian orphans and by issuing a retaliatory blacklist of American persons, including Preet Bharara, former US Attorney for the Southern District of New York, who filed charges of fraud against a company represented by Ms. Veselnitskaya, Prevezon Holdings, and who was subsequently fired by the Trump administration.

Veselnitskaya and her firm, Kamerton Consulting, represented a prominent Russian businessman, Denis Katsyv, the owner of the Cyprus-based Prevezon Holdings, in a civil case accusing the company of fraud. The case was filed in 2013 in Manhattan by then-U.S. Attorney for the Southern District of New York Preet Bharara. Katsyv’s father, Pyotr, is a senior government official in Russia.

“In 2007, a Russian criminal organization engaged in an elaborate tax refund fraud scheme resulting in a fraudulently-obtained tax refund of approximately $230 million from the Russian treasury. As part of the fraud scheme, members of the organization stole the corporate identities of portfolio companies of the Hermitage Fund, a foreign investment fund operating in Russia. The organization’s members then used these stolen identities to make fraudulent claims for tax refunds,” the U.S. attorney’s office said in a press release.

The case was settled in May 2017, with Prevezon agreeing to pay nearly $6 million to resolve the claims, without admitting wrongdoing. You can read more about the case and settlement here.

Veselnitskaya told Izvestia, the settlement “is almost an apology from the government.”

I don't think Veselnitskaya is high up in the inner circle of the Kremlin, but she is well connected politically and acting toward removing something that Vladimir Putin regards as a serious burr under his saddle.

There is no slam dunk on collusion in this story as yet, but the picture taking shape is disturbing.
edit on 10-7-2017 by ipsedixit because: (no reason given)

BS. POTUS has less power than Congress. Congress codified Russia sanctions into law. Even if Trump tries to use executive order, it's useless against law. 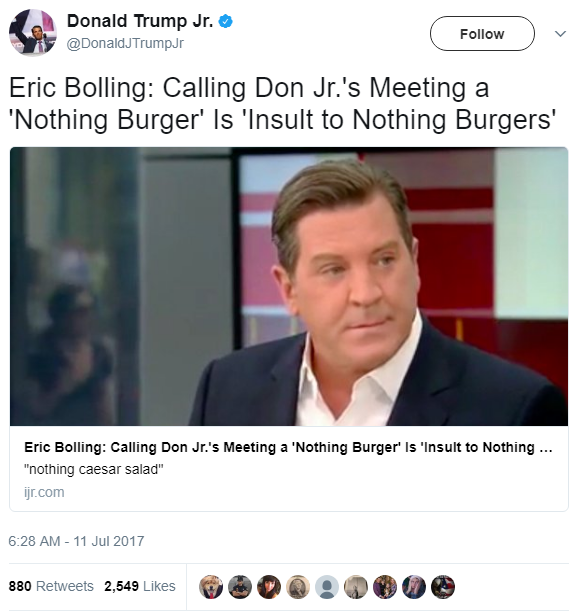 ETA: This tweet below is NOT Sean Spicer of the Trump admin - it's an account by someone else.... 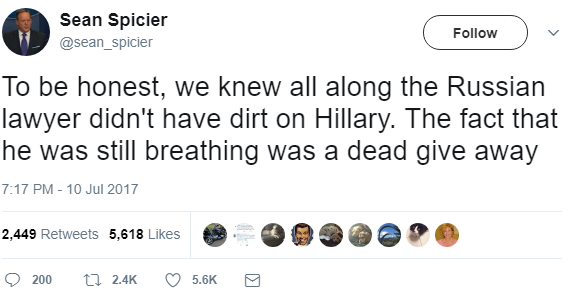 posted on Jul, 10 2017 @ 08:39 PM
link
The NYT just released another damaging report that someone emailed Trumps son and told him the Russians wanted to help Trump win.Trump Jr. Was Told in Email of Russian Effort to Aid Campaign

Before arranging a meeting with a Kremlin-connected Russian lawyer he believed would offer him compromising information about Hillary Clinton, Donald Trump Jr. was informed in an email that the material was part of a Russian government effort to aid his father’s candidacy, according to three people with knowledge of the email.

Now we know why young Trump has hired a lawyer

originally posted by: AndyFromMichigan
Per the NYT article, but buried way far down:

In a statement, (Trump Jr.) said he had met with the Russian lawyer at the request of an acquaintance from the 2013 Miss Universe pageant, which his father took to Moscow. “After pleasantries were exchanged,” he said, “the woman stated that she had information that individuals connected to Russia were funding the Democratic National Committee and supporting Mrs. Clinton. Her statements were vague, ambiguous and made no sense. No details or supporting information was provided or even offered. It quickly became clear that she had no meaningful information.”

The woman then switched the conversation over to something about adoption laws. The meeting was arranged under false pretenses, and in any event it never had anything to do with the Russian hacks (which hadn't even happened yet, if I have the timeline correct). The Times, as usual, has misrepresented the story.

That's what I'm getting out of it, too. I can't believe how far our media institutions have fallen in an attempt to stay relevant and steer the country.

originally posted by: stosh64
a reply to: ipsedixit


according to three advisers to the White House briefed on the meeting and two others with knowledge of it.


Why the Yawn? Whether what he met them for was damaging or not...( I tend to believe it wasnt) the fact is the whole Trump administration denied that it even happened, calling ALL OF IT fake news......

Why is it Trump supporters cant acknowledge when their candidate is actually lying? He is just as responsible for spreading lies to stir up his base, as CNN is to stir up theirs........

Level headed thought. Not much of that here lately

originally posted by: knowledgehunter0986
Are people really this ignorant to how politics work and how dirty every single player in the game really is?

There is no honor among thieves.

Apparently there are a lot of folks here who've never been within a stone's throw of a political campaign. When you're asked for meetings, you go to meetings. You meet with people who have issues to discuss. If it's a statewide or bigger campaign you mostly just go where the campaign manager tells you to go. You follow the campaign schedule, talking to people about issues.

This woman's issue was adoption as I understand her statement. Was she really a Russian spy? I guess we'll find out because now she's about to get her 15 minutes it would seem.

If this is the best they can do to keep the Russian narrative alive, they're really slipping badly....this smells like real desperation.

Could it be that that story about some of the 1%ers going to beg money from Congress? or...

Russia law in 2012 bars Americans from adopting children from Russia.

I think you're being very naive or willfully ignorant about this that Jr didn't know who he was meeting and why. Not like he's not a very busy man. Let's just waste time with random meetings of an indeterminate nature with strange people. 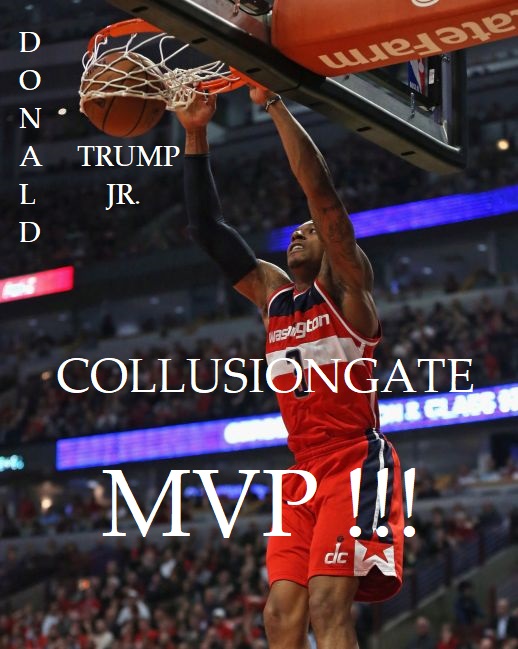 posted on Jul, 11 2017 @ 09:51 AM
link
Here are some tweets from noted Republican political strategists and experienced campaigners on the current developments involving Donald Trump Jr. 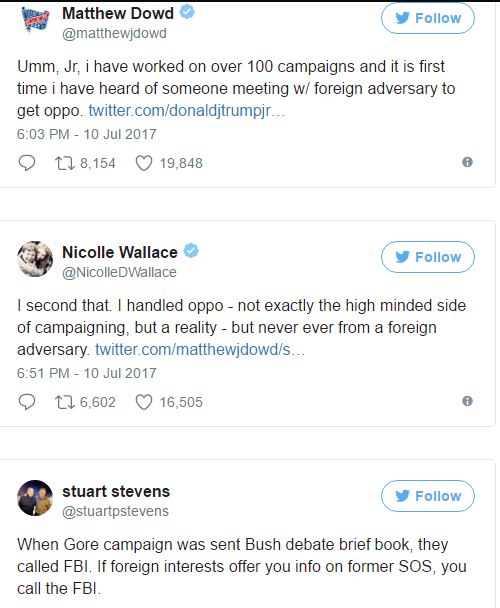 Matthew Dowd was the chief strategist for the Bush-Cheney 2004 presidential campaign and is the current ABC News political analyst.

Nicolle Wallace served as communications chief during the presidency of George W. Bush and in his 2004 re-election campaign.