I'm at work Sharing what I can, when I can. I was excited to post my experience as soon as I could haha

I first noticed this about three weeks ago as I drove to work. I thought at first it was Venus, but it has remained the same location each morning so far. Would not speculate as to what it might be.

Edit: On my phone, if I crank the screen brightness up, all the stars in the background are more visible. FYI

I'm not sure when uploading the image through this site if its compressing anything or destroying the quality.

The moon was not in the north east sky.

Also, please remember. At around 4am.. what ever this was. Was no longer in the night sky.

Regardless, that's all I got. If there's a next time, Ill go grab my telescope and try to image it through that.

originally posted by: Triton1128
I'm usually a light sleeper. I just so happened to open my eyes, and directly out my sliding glass door this thing was shining!

I am just starting to look at your pic. Hopefully, others with more experience will look too. I centered in and cropped your object. Then did a color analysis of various sections...the dark areas around area have 19-29 color variations and interestingly, your object has 2374 color variations. I am simply using my GIMP program on this. IF this means anything, I have no idea really. I am still trying to figure out how to save the color analysis data to share with you. edit add: is this the only picture that you have?

Fun trying though...been awhile since I have used Gimp so just need to remember.

edit add: Ended up just taking a picture of my screen with color analysis details. Not sure if this info helps. 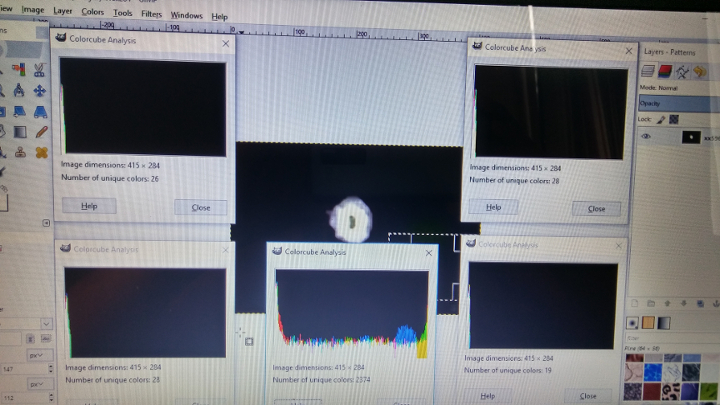 This next one is simply sharpening up the object and then running an gradient black edge detect. 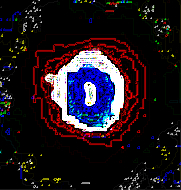 I am curious to see pics that you may have taken then before and after that may not be as good as this capture. It would make a good comparison.

According to the exif data from your image, your f stop was 1.8, your exposure time was 1/9 of a second, and the focal length was 4.4mm (very wide angle).

That means the "object" you have captured is covering 1/2 a degree in the sky.

I'm afraid there is only one celestial object in our skies that bright that covers 1/2 a degree.

Above your object, in the exact same orientation as one would expect are the stars Dabih and then going towards the upper right hand corner are two stars right next to each other: Algedi and Prima Giedi

This is what it looked like at 3:35 am this morning (the time the exif data says the image was taken).

Are you sure you were looking NE? I would have to say an object that covers 1/2 a degree in the sky and that bright to be captured in 1/9 of a second would be quite visible to lot of people, even at 3:35 am.

The image was taken zoomed in. AS much as I could and still hold it still.

My sliding glass door faces NNE, I saw the object looking out that direction. The object was flaring up at times very bright. Brighter than Venus, or Jupiter. Then dimming down to a pin point. This photo was taken when it was flaring up.

Size wise from the human eye. It was bigger and brighter then Venus, but no where as close to the size of the moon. Which was on the other side of the house.

At around 4am.. the object was gone.... please keep that in mind.

I have in the past few years experienced a very similar sighting. I was between 5-7 miles away between me and a mountain and was an orb at about 2000ft altitude . The difference however is that the one i saw was, how do i explain this, dark, meaning the energy was visible yet black with a lighter edges but black light/energy moving within .

I too was just kind of awakend at 230AM and drawn to look out a back patio door, and while i viewed it, I felt drawn or connected to it. Very much locked in to stare at it for a few minutes.

I went to wake my wife and got the standard, its 230 am i gotta be up soon, what are you doing up, what are you talking about, go to bed response. Not my first encounter though, ive "seen" different things since i was a kid.

Venus was rising in the NE sky at about 3:00 AM as seen from Connecticut.

I know you said it had disappeared by 4:00, but could that possibly be due to clouds in your area -- clouds that you could not see because it was too dark to see them? Broken/thin clouds could also explain why the object (if it was Venus) seemed to get dimmer and brighter.

posted on Jul, 10 2017 @ 11:29 AM
link
Here's the photo lightened to show the background stars. There appears to be a bluish object in the 5:00 o'clock position (possibly a comet?) that might be used for reference. Otherwise... ? 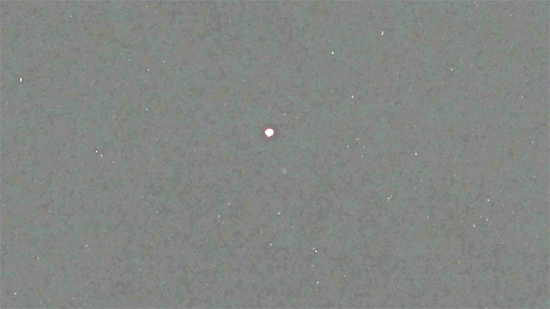 I knew I was in focus because of the reference stars I was able to see at the time. This image proves that. Thank you!

I know many of you are stating its a planet. If I had any inkling it was a planet. I wouldn't of wasted anyones time here. Nor would I risk making myself look like an idiot considering my background.

What ever this was, would flare up, and move.. an inch or so (looking up into the sky). Then pause for a bit, Then move again... flare up.. dim.. ect.

This was not a stationary object that slowly grazes across they sky like a planet. When it disappeared, the sky was still clear. All the stars that had previously been there, were still there. This object was not.

Id be more inclined to say it was man made before accepting it was a planet.


Do you have more than this one picture? Even the one taken before or after that you may believe is not as good? I would like to compare them with this one.

Edit Add: I did end up sharing my pics of color analysis and edge detect in my above post too. It would be interesting to compare data with same skyline.

I do not. Ran out on the back deck. Focused on the object. Zoomed in as much as I could, while still holding still. Snapped a shot.. then ran back inside.

aww...too bad. My only honest conclusion is that it is up to debate still on what the lighted object actually is. I did find it interesting on the edge detect that there does appear to be a solid almost kidney shaped object emanating radiating light outward.


Last night at 3:30am. I woke for no apparent reason, and noticed a really bright light over the fields behind my house.

Go check out those fields when you get a chance, it may have been making a crop circle for those 30 minutes.

Its fields by my house, but out further, is all forests. For miles.. then a reservoir which is off limits.

posted on Jul, 10 2017 @ 01:33 PM
link
One week ago, I woke up at three AM. Totally awake, I looked out the window. There were NO stars, there was a thick cloud cover that night. We are rather high up in altitude, and hovering over the nearest town was a bright and large light exactly like that. It couldn't have been very far up, because of the cloud cover. I watched for several minutes, then walked away to read a book to try to get back to sleep.

I didn't bother taking any pics because of course no one would believe it was anything but a star. They could not know that no stars at all were visible that night, nor get a sense of how big and bright this was.
I (and my family) have had lots of abduction-type experiences and such, and I know that others simply won't take it seriously (and I comprehend, I wouldn't either if I hadn't such experiences).

This event was pretty mundane compared to the others we've had. I don't even bother telling anymore.

They need to break you in slowly to acknowledgement. Just keep your mind open and see what happens...;
edit on 10-7-2017 by Bluesma because: (no reason given)

After my first post, I never thought this would of gone in the direction of assuming it was a planet.


Others suggested it might be a planet or the moon , not me. I was critiquing what you said about the image.

No worries. Either way, it was an interesting experience for me, for which I have no verified explanation. I knew a few on here would get a kick out of it.. so I shared

Im not gonna lie.. When it was out there hovering eye shot from bed, I was having flash backs to the movie " fire in the sky " which I saw as a child... Really glad it didn't go that way hahaha!

Snapped a shot.. then ran back inside.


If you set your alarm clock for the same time you'll probably see the same thing again, right there.