page: 1
26
<<   2 >>
log in
join
share:
jeep3r
+5 more
posted on Jul, 9 2017 @ 02:59 PM
link
Considering that Mars used to be wet and warm in the past, I sometimes ask myself whether that environment could have been stable for long enough to allow life to form and evolve. Not just microbial life, I'm thinking about more advanced forms of marine life, like stromatolites or coral reefs, and of course whether these could have affected the terrain in such a way that it can be distinguished from other landforms via satellite imagery?

Here's a greyscale image of the Great Barrier Reef on Earth: 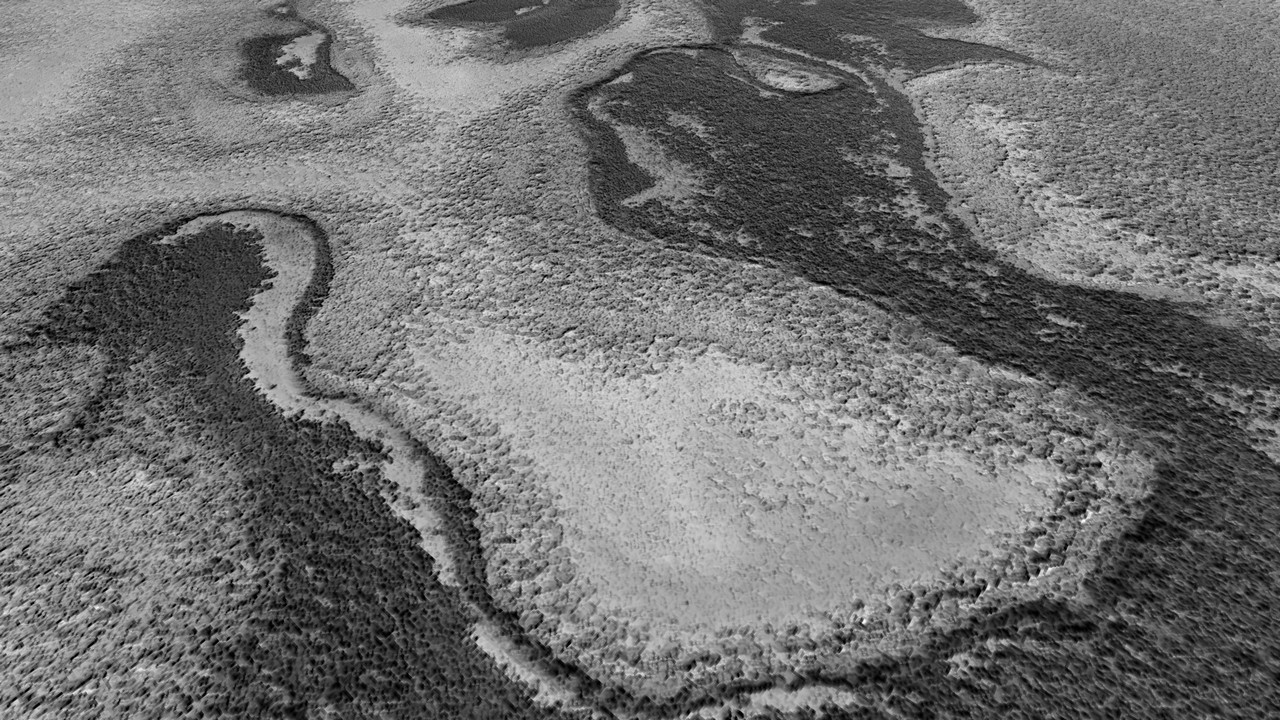 When comparing the two images it's of course not a 100% match. But upon closer inspection there are subtle features that appear to be quite similar. It's especially the shading of the rocks and soil layers that intrigued me.

Officially, the image is labeled "North Polar Landforms" (close to the Planum Boreum region, coord.: 83.755°N 244.908°E) and such features are often described as being the result of sublimation or periglaciation. In the two images above please also note the curved segments running roughly parallel on the left hand side with a lighter streak of sand in the center (I noticed that these occur rather frequently in areas where coral reefs form, at least on Earth).

I'm quite sure that geologists would have alerted us to the existence of ancient reefs by now if they ever existed and if they were indeed identifiable in satellite imagery. But to the layperson the possibility of actually finding such remains wouldn't neccesarily seem impossible. There are probably many other areas on Mars showing a similar terrain, but I didn't have the time to do a more thorough research.

Also see thumbail below for a different perspective: 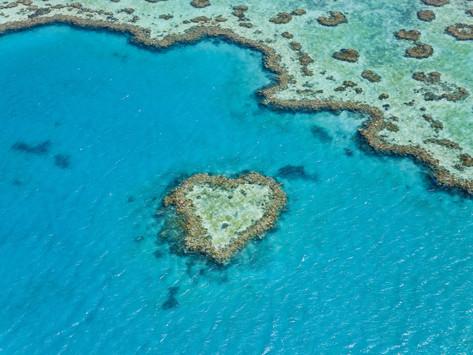 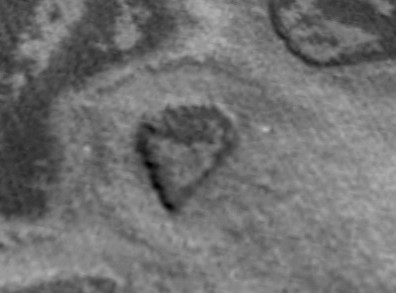 I don't think that the discoloration/shading of the terrain is due to albedo features since the same coloring/shading shows up on several images taken at different dates. Also, I'm aware that the above points are no proof of anything and that my comparisons are based on visual analysis only, but could there be a way to determine whether certain marine organisms have a lasting impact on surface morphology (eg. shading) that can be seen in aerial images?

I know this may be a far-fetched idea, but perhaps it's worth thinking about it? As always, thanks for reading up to here and I look forward to your thoughts on this...

posted on Jul, 9 2017 @ 03:08 PM
link
These are very interesting. Good find. Could be the detritus of ancient reefs from the long-gone north Martian ocean.

Is it me, or in that photo of the Martian "heart" formation, is the "heart" in the centre of a slightly-darker ring formation? Not clear whether it is elevation or depression, or what it implies. My initial thought is that the central formation means it is unlikely to be an impact crater.


I know this may be a far-fetched idea, but perhaps it's worth thinking about it?


I don't think it's far fetched at all , it's believed Mars was Earthlike for 2 to 3 billion years , life on Earth started after about a billion years and arose from the seas so I see no reason it couldn't have started on Mars around that timescale in the Martian seas.

I don't think it's far fetched at all , it's believed Mars was Earthlike for 2 to 3 billion years , life on Earth started after about a billion years and arose from the seas so I see no reason it couldn't have started on Mars around that timescale in the Martian seas.

Looks like I don't have to question my sanity after all

I wonder if anyone can provide insights about what happens when coral reefs start decaying and whether or not their former existence would leave visible traces in the overall appearance of the terrain (traces that we could make out from a distance, without "boots on the ground" so to speak).

Of course we should consider all non-biological processes at first, but it's really tempting to think there was a lush biological environment on Mars at some point.

originally posted by: jeep3r
a reply to: audubon

If the water was drying up, then the coral would absorb the seawater for nutrients and let it evaporate. So they would seem to be in their own little ponds. Here's another example:

Yes, that's a good insight, and could make a lot of sense.

I am really intrigued now. I wonder how many other such features there are, and whether any of them have been explained in mundane terms?

I'm hoping to find some more examples as well, but it takes time. I'll add them to this thread as soon as I get the chance to.

posted on Jul, 9 2017 @ 06:43 PM
link
some fascinating images.
wasn't the sun much hotter billions of years ago meaning the goldilocks zone we are in could have around mars?
can never find anything definitive as scientists aren't in the habit of making guesses.
i'm pretty sure i read somewhere a while back that we have pretty much killed off our great barrier reef.

the result of sublimation or periglaciation

posted on Jul, 10 2017 @ 02:27 AM
link
Interesting observation, but the important lesson I took from reading about science is that if something looks like something else, it doesn't mean they are related or have the same origin.

Even if Mars were habitable for long enough for coral polyps to evolve, could they have existed in the polar regions where it would have been quite cold anyway?

The layered formations in the polar regions are explained as the result of climate change over a long course of time: www.uahirise.org...


Mars, like Earth, appears to have experienced global climate changes over the past few million years. The effects of Earth’s ice ages are well recorded in polar ice in Greenland and Antarctica. Similarly, layered deposits in both polar regions on Mars (see above) appear to record ancient Martian climate variations. Changes in the tilt (relative to the Sun) of the rotation axes of both Earth and Mars are thought to have influenced their climates, but these changes were larger in the Martian case.

For this reason and because of the apparent lack of recent oceans and life on Mars, it should be simpler to determine the causes and history of climate changes on Mars. HiRISE is returning images of the polar layered deposits on Mars that have the potential to help to unravel Mars’ climate history.

Most Mars researchers believe that the polar layered deposits are the result of variations in the amounts of dust and water ice deposited over many climate cycles, but the amount of time needed to form individual layers remains a major uncertainty. Studies of the thickness of polar layers are limited by image resolution. Are thinner layers present, but not visible in the images returned by previous Mars missions? HiRISE is expected to answer this question and better determine the thickness of layers in the polar deposits.

Analysis of HiRISE data should result in a better understanding of the timescales involved in the deposition of the layered deposits and provide important information regarding the climate history of Mars.

Viewing the images at their original scale may also give you a better perspective. Here's the "curved segment" at the original image scale, at 50 cm/pixel resolution:

The light-toned band in-between the dark ones is approx 60 meters wide in the widest part seen here.

This could only vaguely be likened to coral formations; it looks more like just bedrock with layers of frost and dust.

Viewing the images at their original scale may also give you a better perspective. Here's the "curved segment" at the original image scale, at 50 cm/pixel resolution

Some good points there, wildespace, and I admit that some wishful thinking was involved here (especially when looking at the scale of the features).

However, the general question remains (to any experts out there): would it be possible to identify ancient reefs on satellite imagery? Would they decay without a trace or would they affect their immediate environment in a way that would be recognizable and make them distinguishable from other land forms?

posted on Jul, 10 2017 @ 03:36 PM
link
I don't think anyone was suggesting that these formations were intact coral-like reefs, were they? Or at least, that wasn't the assumption I was making. Clearly, it's unrealistic to expect coral-like lifeforms to still be recognisable after however many squillions of years have passed since the Martian ocean evaporated.

As for the point about the Martian north pole being cold, I'm not sure about that. We don't know how warm Mars might have been in the past, and here on Earth we know that at one stage it was warm enough for crocodiles to live above the arctic circle. I don't think we can take much for granted about the ancient Martian climate - or even about the temperature that Martian life-forms might have found conducive.

Not in terms of extant corals on the surface, I doubt anyone assumed that to be the case.

It's more the thought of whether or not ancient marine organisms, like corals or stromatolites, would have left behind any distinct large-scale patterns in the terrain that would be visible long after their demise.

I'm not sure if carbonate exoskeletons, eg. as produced by corals, would completely decay or whether these would somehow leave a sort of "signature" in the terrain (shading, discoloration, patterns etc). Also taking into account that erosion on Mars over the past 2bn years was not necessarily overwhelming, as stated by this source.