She paused in an intersection and than continued through when the other side's lights were already green. That's called running a red light. At least it is where I live. She should have taken extra precaution. She could either see the signal and knew she was in an intersection with a red light or she couldn't see them which is a NO NO. Usually when you are crossing at a yellow or stalled at a red and have to push through, you slow the # down and honk your horn till you get over. She is completely at fault and the celeb worshiping culture seems like they want her to get away with this.

I would also like to note that my opinion on this may change depending on how fast the other driver was going. If he was speeding, they are both at fault. Although it should be considered that the guy driving should have taken precaution seeing both lanes next to his stopped at the intersection but that doesn't remove guilt from Venus.
edit on 8-7-2017 by Antipathy17 because: To add content and remove redundant reasons for edit.


I wanted to add. If this incident happened just like this but Venus would have been injured or died because of it, would the other driver be at fault?

posted on Jul, 8 2017 @ 03:24 PM
link
You misunderstand what happened. What is it about "lawfully entered the intersection" that you do not understand? She's not liable. This will result in the dismissing of the lawsuit by the money hungry family that actually caused the accident. If it had not been Williams herself, the lawsuit would never have happened. I'm glad to see she has been vindicated.

I don't care if she entered the intersection legally. That's just white-washing the truth. This is criminally negligent manslaughter. I am willing to listen to your opinion though and hope you reply again. Again, it does matter if he was speeding.
edit on 8-7-2017 by Antipathy17 because: (no reason given)

posted on Jul, 8 2017 @ 03:31 PM
link
In most states (I do not know FL laws) if you enter the intersection prior to the light turning red, then you have the right of way until you get out of the intersection. The exception to this is when the intersection is already full. You should never enter an intersection if you do not have room to exit the other side. 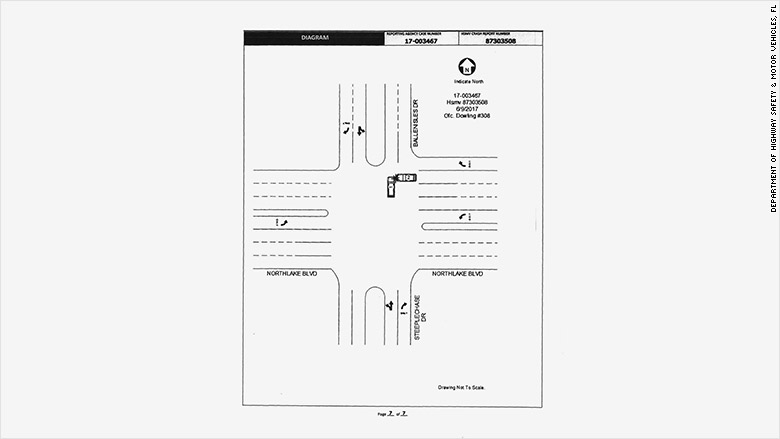 If you want to blame someone, then it would be the third car, for not giving way to Williams when turning left and forcing her to brake in the middle of the crossing.

Gotta figure out if they were allowed to pass or they "took" the turn.

Yeah but unless the guy was speeding (maybe even if he was) she didn't take enough precaution going through.

As we explained to our son, when that light is yellow, you have to make a decision: am I going too fast to stop safely or in time or can I do so? If you can't make the stop, then you have to proceed even on yellow because it's not safe for you to try to screech to a halt.

As many lanes as that diagram shows, it's likely the speed limit there is fairly fast, so it's entirely possible it was not safe for her to come to a stop safely.

posted on Jul, 8 2017 @ 04:01 PM
link
Incidents like this are also why, even when your light is green you should be prepared to slow down or stop as you come an intersection because you never know what the other drivers are going to do.

Defensive driving. Never assume that everything will be hunky-dory.

originally posted by: JDeLattre89
In most states (I do not know FL laws) if you enter the intersection prior to the light turning red, then you have the right of way until you get out of the intersection. The exception to this is when the intersection is already full. You should never enter an intersection if you do not have room to exit the other side.

This is true everywhere. I was waiting to make a a left hand turn and was in the middle of the intersection with oncoming traffic. The light turned red while I was sitting there. I continued on when the traffic stopped because I was in the way of the cars going on the street I was turning into.
There was one car behind me at that intersection . A cop. He followed me through for the same reason. I didn't even get pulled over. I'm pretty sure I was legally making my turn.

Reminds me of that old joke
My brother does it all the time... ever hear it?
Ill write it if I won't get in trouble for it. It's clean . And topic appropriate.

Yeah I did that once too. The guy behind me did not.

There's a fine line. You shouldn't gun it to get through at the last second, but neither should you endanger yourself and others behind you by stopping suddenly either. It's a judgment call as to what you can do safely, and the yellow allows for you to finish your business like making a left turn against on-coming traffic.

Exactly, happens all the time, especially in busy diverse traffic in Florida. People are always racing to make that green turn arrow! That's why she had to stop in the intersection. I didn't hear whether the one who cut her off had a turn arrow or not. Probably not considering she had a green to pull out into the intersection. If she had a green to go straight, there was NO arrow lit for the one who cut her off. The true one at fault here is the ding dong that cut across in front of her.

It's funny the situation you talk about. Floridians call the move you had to make, 'Pulling a Tourist' because that is the way most Florida tourists drive after they've had to sit through a few traffic light changes. You always see people parked in the intersection waiting to make the left.

Sometimes the ONLY way to make the left turn, in your lifetime, is to drive out into the intersection and wait.

Florida being a no-fault state requires all drivers to have 'Complete Control of the Vehicle at All Times'. So if you drive into someone who is already in the intersection, it's your fault you should have seen them. It's like taking personal responsibility for your actions.

I don't know the driving laws where she is and I don't plan on looking it up.

Then don't decide to debate something after declaring you can't be bothered to educate yourself on the subject.

This is why accident investigation is a big deal, because of issues like this. Could Williams even see the oncoming car from the angle she was at? Did the vehicle sitting in the #1 or 2 lane of Northlake obstruct her view? Was the vehicle that struck Williams' vehicle traveling too fast for her to have seen it from where Williams was at in the intersection?

This is why you have to actually attempt to learn about things, rather than just say "I'm not gonna bother learning about this at all, but I'm gonna pull an opinion out of my ass anyway."

Let me help you out here... every driver in every state has a lawful responsibility to avoid a collision whenever possible. Even if you have the right-of-way.

So according to Florida law, it was up to the second driver who was approaching the intersection to yield the right-of-way to Venus Williams, who had already lawfully "entered the intersection from a different highway." And given that the other vehicle was approaching on red light, there was no reason they shouldn't have been able to stop in plenty of time.

I should think the second driver could make a case against the driver who turned left in front of Venus, violating her right-of-way and forcing her to stop to avoid that accident, as was her legal duty. But Venus is not at fault in any way.

Certainly, without a video showing the light being green for her, I question that whole video as being inaccurate, a tool for the defense. We see at least three cars including the one that hit her zooming along at speed on that major road. Does that mean that all three were running the red light while she had the green? I don't think so. We will see, eventually, the whole story.