posted on Jul, 2 2017 @ 03:28 AM
link
Found this on the marines twitter page. @LostWeapons discusses the the effectiveness of the XM1156 guided charge. I remember reading bout these in popular mechanics when they were being first developed in the beginning of the decade. Nice to see them out there. Accuracy is keeping collateral damage in mind, good to prevent friendly fire in close urban street battles too. I believe they were like a drop in kit that could be added to existing shells, which was a significant cost reduction. Perhaps an expert can confirm, fill us in?? 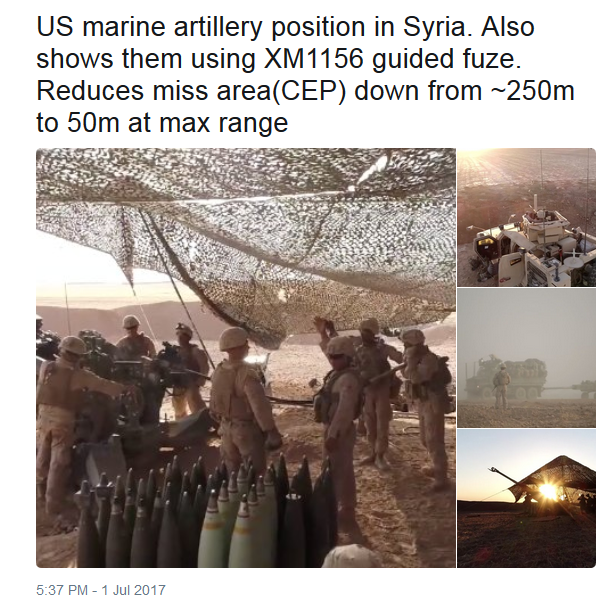 Funny how the US and its 'allies' has been in Syria for what is ti .... 5-6 trying their abolute best to gety rid of ISIS who run round the desert in pajamas weliding small arms without armoured capability whatso ever but the US has never been able able to defeat them. Yea right, one wiuld have to be idiot ot bleeive that.

Funny how the US and its 'allies' has been in Syria for what is ti .... 5-6 trying their abolute best to gety rid of ISIS who run round the desert in pajamas weliding small arms without armoured capability whatso ever but the US has never been able able to defeat them. Yea right, one wiuld have to be idiot ot bleeive that.

And not to forget:
The former USA is acting illegally in Syria, according to international laws.
But i guess because they are "The Good Ones"(TM), nobody talks about that fact.

Then suddenly the Russians think that they have to play world police. What a lucky coincidence that Russia needs a war badly at the same time, to deflect from the problems at home. So they just start to create their own, "moderate", beheading terrorists that act in the Phillipines, for sure as "The Good Ones"(TM). And send their troops to the Phillipines, illegally, according to international law. And start to shoot down phillipine planes, to to shoot around with howitzers on phillipine soil, etc.

What hell would break loose?
The evil russians again, breaking every excisting law.
Didn´t we, the civilized west, say it the whole time, that you can´t trust the evil Russians...

posted on Jul, 2 2017 @ 06:47 AM
link
I'm no expert, but I have seen how these munitions are implemented and what effect they have on the enemy.

We had rocket fire come in one day. Kept us in bunkers for the better part of 3 hours. Then came the complex ground attack.

While we were laying down fire at the perimeter of the base, the artillery guys loaded up a few of these and let loose.

The landed with astounding precision. Mortar teams have similar munitions as well.

The topic isn't about how you people feel about US involvement is Syria. It's about the weapons system.

Go drone on about how much more you know about the situation than anyone else on the political and WoT forums. The weapons forum is not a political forum.
edit on 2 7 17 by projectvxn because: (no reason given)

posted on Jul, 2 2017 @ 11:31 AM
link
a reply to: projectvxn
See, I am glad you understood why I placed it here specifically. Your firsthand experience of being relieved by the deployment of this system is the kind of stuff I wanted to hear about. I don't necessarily agree with whats going on out there, but anybody that would like to have that discussion can visit my Raqqa thread. I just want to talk about the system itself at this point.

I assume they were distributed to all theaters of combat as soon as they hit production? When I read the article years ago I was sold on the cost reduction of having to use less rounds to finish the target quicker with precision. That alone is justification for the higher cost per kit. The kit may cost more than the rounds, but now we are using significantly less rounds per engagement. The fact that it is a drop in kit that can be added to a variety of existing rounds just makes it all the more better.

Do we export/sell this Kit to our allies as well, or do some of them have their own projects they have implemented??

We had 500 dudes that scattered like roaches once the King of Battle showed up. Didn't get an attack like that again until earlier this year, if that tells you anything about how effective they are physically and psychologically.


I do not know if we export this technology. Lots of stuff is restricted by ITAR regulations.