page: 1
25
log in
join
share:
windword
+13 more
posted on Jul, 1 2017 @ 12:44 PM
link
Take a minute from your stressful day and lighten up watching this care free baby elephant chase birds, (spoiler alert) fall down and run to mommy! So cute!


I wasn't having a stressful day ... until I was triggered by this thread.

Am I having a stressful day?
I don't think so.
Dare I click the play button?
I want to watch the video!
But have I earned the right?
I don't know...I just don't know!
Are you stressed yet?
I believe I am ... click

Thank you. I noticed the mamma also respond to the child's plight.

Oh no! I had no idea my post might be seem as a challenge to the peaceful mind, and possibly triggering the tranquil! In the future, I'll try to be more responsible and try not to disturb the serene!

YOU SHOULD BE ASHAMED OF YOURSELF!!!

Do you know what you have just done? Me, and probably hundreds of thousands of millions of people now demand for the market of baby elephant to be opened! I want one.

And you know what will happen then? Most people will release them in the wild when they start to get bigger, just like people do with rabbits on Easter...

Hey, I had to lower the fun, sorry.

Haha, thanks for both videos. Was better than those pesky cats...


Me, and probably hundreds of thousands of millions of people now demand for the market of baby elephant to be opened! I want one.


I used to own an elephant named Peaches. She lived in the San Diego Zoo.

It was like this:*
The San Diego Zoo was buying a young elephant from a source. My parents paid a fee to enter a name the elephant contest. Since she had orange tint hair, it was logical to name her Orange, rather Peaches. We won the contest, and Peaches she was.

*Disclaimer: The above is confabulation (mixture of memory, mis-memory, and made up stuff to fill the gaps)

The moral of the story is: There are responsible ways to own an elephant; become a sponsor, for example. 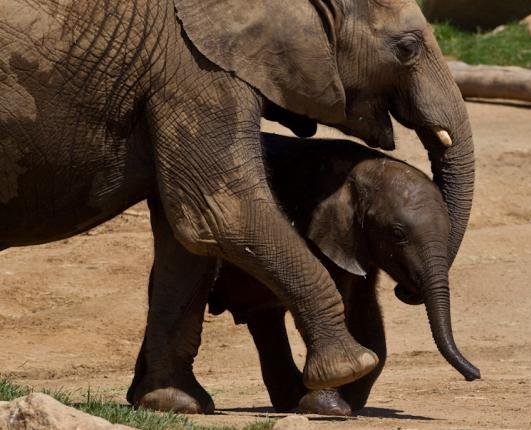 Well, maybe something else. Season tickets or something.

Regarding the link provided, and knowing about zoo therapy, you have to wonder why they even need to "boost employee morale".

posted on Jul, 1 2017 @ 05:37 PM
link
so cute!! my parents saw a baby elephant being born about 25 years ago while on safari in Africa. to witness that is a VERY rare event apparently, so they were super lucky! all the elephants in the herd trumpeted the baby's arrival and herded around it. elephants are so good with their young.. love em!
edit on 1-7-2017 by knoxie because: (no reason given)

kids are funny -- their outlook, their energy -- no matter the species.