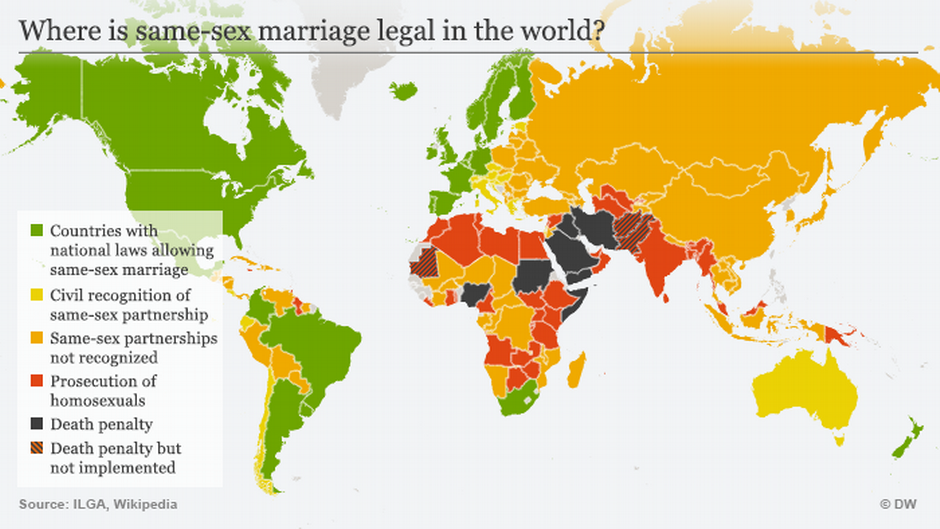 The German parliament, on Friday passed a bill legalizing same-sex marriages in a snap vote that made it onto the agenda before the summer break after a surprise shift by Chancellor Angela Merkel.

More than 70 members of Merkel's conservative bloc must have voted in favor of the bill for it to pass.

Merkel later explained her "No" vote by saying that she understood the definition of marriage in the German constitution as referring solely to unions between men and women.

Although she voted against homosexual marriage, she said that after long reflection, she had come to the conclusion that same-sex couples should be able to adopt children, which the new bill will legalize.


Germany's Bundestag passes bill on same-sex marriage
edit on 30/6/2017 by ProphetZoroaster because: (no reason given)

Welcome to our totalitarian regime. Nobody asked us if we want this to begin with. I'm all up for it and i support the decision but it's something that everybody should have a say in it at least in my country. It's nice to see Merkels true colors and people will still vote for her. This shows no matter what we do and demand or who we vote for we have no real influence on any decisions the government officials make. It's all just a scam. Our election is gonna be a joke. Meanwhile they quietly infringe on our rights and declare hate speech as a crime and some other bull# yeah sorry i don't tolerate radical islamic terorists like Merkel does. The whole system is rigged and corrupt.

posted on Jun, 30 2017 @ 09:50 AM
link
cities turn into slums.
rape rate like never before.
civil war one step ahead.
billions of german euros and wealth get transferred to other countries.

This law affects between 1%(felt LGBT percentage in Germany) and 7,4%(numbers from a funny LGBT study, 12.000 people were asked online and they call it representative for whole Europe...) of the german people. Even less, because not every homosexual couple needs and wants to marry in the year 2017.

But the german media celebrates this as if somebody brought down another wall here.

One thing makes me wonder!
People "beg" for fair jobs and fair wages again, like before the neoliberal Agenda2010/Hartz4, that makes a little amount of rich richer and the rest poorer.

We have old age poverty, you can see it live everyday, older people search public bins for deposit bottles(25cent each). And that is just the bginning of the coming and huge old age poverty problem that we will suffer soon. Because, if people have to work for low wage slaves wages, they get almost nothing when they retire.

Our country is ruled by corporations, we have more lobbyists working in the Bundestag, day by day, than "politicians"(OK, our politicnas don´t work, at least not for the people, not for ALL people). We have politicians that cover corporations like VW, after VW cheated all the people and risks the health of people worldwide(particulate matter, exhaust emissions...).
The list would take no end.

If people ask politician to work on these problems, we hear:
That needs a long time, politics aren´t that fast, too much problems, constitution changes would be needed, etc...

But if it is time for elections campaign, suddenly laws can be created and passed in almost hours. If these laws affect only a little minority of the population. And then these "political correct" laws were blown up as if somebody suddenly invented world peace, for the WHOLE world population( i know, otherwise it wouldn´t be world peace...).

I am heterosexual and i am happy that i never married when i see what problems and costs divorces create. And every what, maybe third marriage, will be divorced nowadays. Sooo, why marry nowadays? And i think that most homosexuals think the same way, because they are just homosexual, not stupid or mentally ill!

And i don´t think that every homosexual couple wants to adopt a child and needs a marriage for that. If heterosexuals don´t need a paper that "proves" that they love their partners, why should homosexuals need such a paper? Really, this "politically great" law affects almost nobody...

Don´t get me wrong, i don´t care if homosexuals want to marry! I just don´t care about it. The same as i don´t care about heterosexuals that marry, because it´s simply their own fault to marry nowadays. For me it´s just show for the families and praising a cult, because if you want to marry the right way(like the women like it), you need to go to the church here. Not because the women ever would go to a church voluntary in their life or believe in any "god", but it has to look like in all these movies...

To make it short:
It´s a joke that this law makes it even to ATS.
Because, being honest, it´s just a little(but politically correct) fart that is blown up to a thunderstorm!

I am still waiting for laws that protect ALL of the german taxpayers from the raising Big Brother system, for example, but exactly the opposite happens. To allow homosexuals to marry doesn´t cost the rulers anything, shutting down the anti-democratic StaSi4.0 system would cost them their(!!!) security and later their head, maybe!

originally posted by: anticitizen
cities turn into slums.
rape rate like never before.
civil war one step ahead.


originally posted by: anticitizen
cities turn into slums.
rape rate like never before.
civil war one step ahead.

Well Berlin is a good and sad example though i guess the member is not far off. Some parts look like they come straight out of a zombie apocalypse film and the police avoids certain places like the plague. I'm not sure about the civil war part. I doubt german people would rise up but our integrated immigrants from other countries might due to the fact that they grow to despise the refugees. I still can't believe the fact that our best options are Merkel for the zillionth time and Schulz a carbon copy of Hillary the Leprechaun. 90 million people and that's what we get as a choice. It's so frustrating. I want some guy like Trump to run. Trump actually tries and works hard to fulfill his promises and all we get are excuses or a simple "We can do it" but nobody has a clue how. We should have impeached Merkel right after that. Promises made and never kept.

Germans first everyone else second. I'm still furious after i heard what my mother is going to get with a 100% disability claim and retiring a few years early due to #ing cancer. She worked her ass off her entire life and that's how our governemnt repays her. Meanwhile our goverment officials raise their diets every year.

posted on Jun, 30 2017 @ 11:18 AM
link
a reply to: Perfectenemy
But to be honest, Berlin in comparison to other metropolises worldwide, is a kindergarten, a peaceful paradise.
Ask the people in Rio, in Sankt Petersburg, in Detroit, in in everywhere else in England than parts of London, ask in South Africa, in France, almost everywhere worldwide it´s worse than in Germany. I always have to laugh if german "Gangster"-Rappers(LOL) talk about their "german ghetto life"...

Civil war would break out in Germany only if Germany would run out of beer or coffee. Everything else seems not to affect the german working bees, low wages and all that, doesn´t matter. Main things after beer and coffee, the newest spyPhone in our pockets, the newest spy technique in our homes, the newest because 2 inches bigger TV in our 25qm living spaces, because rents are almost unpayable. But that doesn´t matter too, like it seems. But dare there would be a shortage of beer and coffee, hell would break lose, because the everyday zombies need their gas to run.

Germany, first...
Hmmm, we tried that some decades ago, didn´t end that well for us, no reason for a replay!
Others can try that isolation and -insert any nations name here- First thing and hope the own country would turn into a paradise with these politics, but they shouldn´t forget that walls don´t only keep people out!

We germans, the most of us, were able to learn from our past and we let others destroy their countries/nations now, with their First! politics.
And don´t forget that, in reality and evrytime, everywhere on earth, before First! stands:
The profits of the ruling class

Edit:
I forgot that (refugee/muslim) rape thing. Because it is not a thing. Maybe on Breitbart, like all those Sweden stories. According to them no girl in Sweden was not raped yet, several times daily, by blackhaired, blackskinned and, for sure, muslim migrants. It seems that blonde swedish girls have to take two hours daily to get raped, for new Breitbart articles that some people around the earth believe to.
Still the majority of the women here gets raped by their husbands, most of these husbands are christian!

According to Breitbart( i just have to think of them), Sweden already had to be wiped out, because of civil war, migrant riots, because of a raped to death womens population, etc. But still Sweden is one of the countries with the highest living standards, where the majority of the people is standing behind their royals, their government, their rulers, where the people are satisfied and even happy to pay taxes(because they get something back for that money), where the people love to live. That doesn´t fit to all those rightwinger horror stories.

Welcome to our totalitarian regime.

Yes because the most prominent hallmarks of a totalitarian regime is in giving citizens more freedoms.

originally posted by: anticitizen
cities turn into slums.
rape rate like never before.
civil war one step ahead.
billions of german euros and wealth get transferred to other countries.

Whens the last TIME you've BEEN to Germany

Another election-cyclejerk inbound. Meh.
edit on 30-6-2017 by PublicOpinion because: (no reason given)

Folks, hug your kids tight and oppress the civilly-disadvantaged while we still can. This sick world is taking our freedom to oppress others away and pretty soon we'll have to find somebody new to # on. Just heartbroken about this.
edit on 30-6-2017 by Abysha because: spellinz


originally posted by: anticitizen
cities turn into slums.
rape rate like never before.
civil war one step ahead.
billions of german euros and wealth get transferred to other countries.


Whens the last TIME you've BEEN to Germany

last year, why do you ask?

posted on Jul, 1 2017 @ 02:31 PM
link
Same sex marriage is not intrusive on anyone. Transgender is still problematic. Doubt tennis would allow Federer to compete in WTA simply by identifying as a woman.

posted on Jul, 3 2017 @ 11:11 PM
link
In 2008 even California voted against same sex marriage. But it doesn't matter. The totalitarian government went against the people saying prop 8 was unconstitutional.

Feds go against states rights
edit on 3-7-2017 by Doctor Smith because: (no reason given)