posted on Jun, 26 2017 @ 06:24 PM
link
I've seen bioluminescence before. Last year I visited New Zealand and checked out the Waitomo Cave. It's a wonderful sight to behold. You hop into a small boat and as the guide slowly moves you away from the artificial light of the boarding area, the cieling of the cave begins to glow. As the darkness surrounds you, the a neon blue aura canvases the cieling as glowworms light the way for you. It's truely an amazing experience and one I highly recommend, should you happen to find yourself in that part of the world...

But what I experienced a couple nights ago is truly worthy of being the primary reason for a trip. Puerto Mosquito, A.K.A. Bioluminescent Bay, is one of the most amazing places I've ever been. Located on the island of Vieques (just east of Puerto Rico), it has been declared the brightest bioluminescent bay in the world by Guinness World Records.

We elected to go with the glass bottom kayaks as opposed to the motorized boat (which I've heard makes an amazingly colorful wake). We boarded by the light of our transport vans in a small inlet. As we paddled out away from the lights, the magic began as tiny blue flakes began to wash under the glass. Completely mesmerized, my attention quickly shifted as a fish darted in the water. It was like watching a bright blue shooting star curve back and forth along the water's surface. In that instant I took in how amazing this experience would be.

As we paddled on, every plunge of the oar into the water got brighter and brighter. Each stroke created a magical fiery blue explosion. I swung the oar to splash water into the air. It rained down and lit the water with the impact from each drop. As I took a look upward, we had a clear night sky with the Milky Way shining bright, but the new moon made for one of the best nights of the year to see the bioluminescence at its brightest.

We paddled out to the middle of the bay where we sat as our guide told us some fun things to try. "Stick your fist into the water and then quickly open it." Poof, it was like casting a magic spell as a blue fireball emanated from my hand. "Now scoop some water in your hand and let it run down your arm." As the water hit each little hair it made a blue flash, like a magical glowing suit of armor engulfing me from my hand to my elbow. Honestly words cannot describe how cool it was.

As the current drifted us back towards shore, our attentions turned to the waters below. A school of blue orbs was swimming underneath us. As we drifted further, the glow of something larger shown through. As it neared we could see the enchanting flaps from a stingray as it glided by. As we approached the shore, we were blessed with what the guide said was probably a nurse shark as it swam around beneath our pod. She said she often sees hammerheads in the bay as well which are particularly cool because the heads are so pronounced.

Upon getting out of the kayak, I felt truly privileged for the experience and extremely recommend it for anyone who gets the opportunity.

The only negative is that as hard as I tried to get pictures with my GoPro, I couldn't capture the glow. The vast majority of pictures on the internet are Photoshopped, but here are a few that are the closest resemblance to the experience. Honestly though they don’t not even come close to doing it justice. 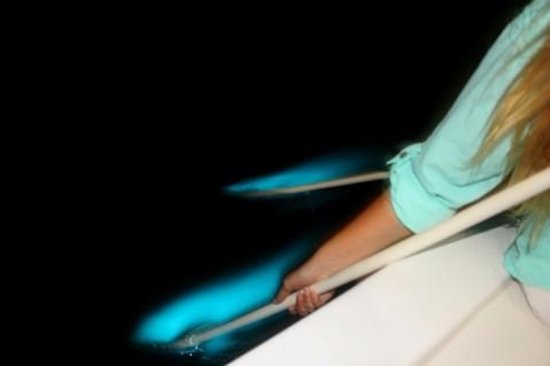 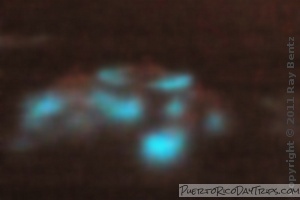 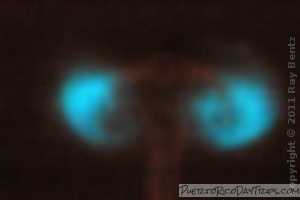 Some info on Bioluminescent Bay

You see how dark it is in contrast to those paddles in the water? It's almost like that on a night dive. Great portions of near-shore waters are affected by bioluminescence. You let your eyes adjust and it's almost like using a night vision goggle. But, it's pitch black dark if you raise your head above the water and have a look around.

Being on (or in) the ocean at night is an amazing experience. Most folks don't have the nerve or opportunity to experience it.

That must've been a real buzz.
Saw a documentary which showed something just like that but I can't remember where it was. Maybe it was the same place.

I noted that you said some of the pics out there where photo shopped.
In the doc there were people on the shore and as the waves ebbed back they were running across the wet sand leaving a momentary trail of glowing blue footprints behind them.
It looked like something from a video game and very magical.

(Also I wondered if this might explain some of the reports of USOs that people say they've seen?)

I love bioluminescence. It's a local occurrence to me now, very amazing.

I think that one is p-shopped, but ya, it was pitch black out. We went during the new moon and on the later tour (10PM) so it was extra dark.

Most pics are faked or very enhanced, but in the right conditions it's very bright. The color makes you feel like you are in the movie Avatar or something. It's very surreal.

I can't say for sure if they faked what you saw in the documentary, but I'm sure that's what it would look like. Any disturbance causes an emission of light so I'd imagine the impact from a foot would create the effect.

Regarding the UFO comment, it could happen, but it's not something that's visible from too far away. Anything beyond maybe 20 feet would be hard to see. But again, in the right conditions the range may be longer.

posted on Jun, 26 2017 @ 10:32 PM
link
Sounds like something truly magical to experience.
I love that stuff. It really shows how amazing our world is, into prospective.

One of my favourite experiences in life was going to the Bamfield Marine Research centre when I was in high school. They took us out on a small boat to a dark channel to see bioluminescence. It was neon green and the most beautiful sight I've ever seen.