page: 1
42
<<   2  3  4 >>
log in
join
share:
IgnoranceIsntBlisss
+26 more
posted on Jun, 21 2017 @ 06:44 PM
link
From late 2010 through mid 2016 I was mostly away from politics and social media trends. And then I came back last year and it was like materializing inside another dimension. Liberal Identity Politics was all the rage now, and it just so happened to be the beginning of what they termed the "Summer of Rage". To really sort out all that had I changed I mostly had to just observe for some weeks. Political "terrorism" was happening in en masse across the "Western World", and no matter the case it seemed we had 'everyday liberals' working overtime in all the active discussion threads playing the part of "Terrorist Sympathizers".

It was so odd to me at first. I kept seeing anti-Obama types repeating the fact that Obama basically refused to use terms like "Radical Islam". It really had me scratching my head for a bit. Why wouldn't he?!? The threads this talking point would get repeated in were mainly in topics involving the onslaught of Islamic terrorism attacks over in the EU. And in those threads we saw everyday liberals in them derailing, deflecting and you name it to take the blame away from Radical Islam. It was surreal! What motives would everyday liberals have to put their own reputations on the line in a de facto defensive posturing of brutal mass murder events, I wondered. Yeah, yeah, the whole argument that 'not all Muslim's are like that and we dont want people to hate them'.

Naturally, my reaction to this kind of posturing is that if everyone refuses to criticize the wicked, then that makes everyone a bunch of enablers. As with any group, the most important ones that ought to speak out are those from within. But this idea that whether or not someone is part of a group might determine of they have the "right" to harshly criticize it is more of this 'enabler rationale'. And what happens if voices from within a group are mostly silent?

Islam is an ideology after all. A tribalist ideology. Like any other religion, for the most part. Like any racial identity, or political identity; you name it... all tribalist ideologies. So the rationale, especially if looking out across the wider world of social media, if anyone criticizes any other ideology then they should expect to get cyberstalked, threatened and even doxxed, apparently. Of course we tend to have a more mature crowd here in ATS at least, but the same logic is there: you're not supposed to criticize Islam no matter how barbaric Mainstream Global Islam tends to show itself to be.

Imagine if liberals weren't 'allowed' to criticize se Trump. Now realize how hardcore the criticisms of him have been. Practice what you preach comes to mind, but the point herein is how absolutely ruthless leftists behaved all last year, especially during the "Summer of Rage". I know, I know, criticisms of Hillary were often brutal too. But the fact that not on single riot broke out at a Hillary rally tells the whole tale.

The riots last year were almost beyond counting. From Trump rallies, to BLM across the nation, to SJW's throwing hissy fits on campuses about 'whatever', to the post-election protests typically turned riots, to Antifa out goosestepping from seemingly out of nowhere, it was a year of rage (that hasn't calmed down in the slightest).

The list of atrocities went beyond counting, and without even counting Radical Islam's contributions. We had blocked highways, ambulances deliberately obstructed, fireworks used as weapons, mass rioting, white people being literally hunted down on the streets, mob violence, abductions, murder... even mass murder. The most striking perhaps was at the Dallas BLM protest where multiple cops were gunned down.

And now to the topic: In response of that Friday mass murder tragedy in Dallas, BLM responded in celebratory fashion by holding even larger protests across the nations (and the UK) for the remainder of the weekend. In a sane world they would have toned there rhetoric and behavior down maybe for a day or two. Instead they stood up in de facto support of the tragedy. It was no wonder when more likewise shooting incidents occurred in the weeks to come.

Now of course all of these events were very alarming to any outside observer, but to me that wasn't even the scary part.

It's interesting seeing liberals in every discussion about these kinds of leftist trends, they always seem to want to spin it off as some odd minority of radicals.

The problem however is this: 'everyday liberals' always effectively defend the perps. Whether it be outright denial of what their influences were, or rabid derailment of the threads to eliminate productive critical discussions (which I refer to as ""), to outright defending of the logic that drives them, no matter how barbaric the acts the 'everyday liberals' come raging in to effectively defend the so-called 'radical minority'.

If this isn't terrorist sympathizing then what is?

Of course most in this de facto supportive positions always seem to want to act like the acts they're defending aren't terrorism.

So there it is: violence and intimidation in pursuit of political ambitions is TERRORISM.

Sure the likes of Radical Islam tend to try to blow a bunch of people up in their acts of terrorism, but that doesn't mean that's the only face of terrorism.

There are specific individuals whom for the last year I have observed doing this. Thread after thread, no matter the group of terrorists and no matter how heinous the acts.

Maybe they dont even consciously realize the role they're playing. I prefer to think that to be the case. I hope this is for them and people that think like them a Public Service Announcement. WAKE UP CALL: The social engineers have warped your brains to habitually support barbaric terrorism (for many of you in every form that is a regular topic in our society).

It's interesting seeing the leftist types so apt to jump all over white supremacists whom do what white supremacists of the violent barbaric varieties do. SO quick to paint it up as it not being just some racial prejudice act, but instead "conservatives attacking liberals". The irony there is, white supremacy isn't inherently some component of conservatism. It isn't the party platform. The flipside is, int eh case of the DNC and liberal Identity Politics, 'SJW Supremacy' is effectively the central doctrine of the liberal platform (in the form of Critical Race Theory).

edit on 21-6-2017 by IgnoranceIsntBlisss because: (no reason given)

So on the one hand CRT / PC / Social Justice is the new core of mainstream liberal platform, while white supremacy is not a primary component of common conservatism. Ont he other hand, liberals almost get off on bringing up lone wolf radicals like Dylan Roof, while in response to events like the time BLM rioters stripped a white boy naked and beat him silly in a parking garage it defend & deflect from the fountainheads that rallied the savages to begin with.

And there in lies the Big Story within this Big Story: I've seen first hand, I've debated them directly in attempts to sway these kinds of minds...

In this recent congressman assassination attempt mass shooting, as expected we had 'everyday liberals' come raging into the big threads. It was interesting in this instance as the effort didn't even seem to be the usual deflection and derail. We had overt support of the logic that drove the shooter. Point by point: Trump, the GOP attacks on Obamacare, Scalise's personal character, the whole nine innings.

We had all of James Hodgkinson's apparent rationale in full support once it was all added up.

And it finally occurred to me: with this same logic, if in 1930's Nazi Germany, when common citizens were out stomping Jews and smashing Jewish properties, the logic would dictate that no it isn't the Nazi's fault common people are out committing atrocities against the Jews. And a year ago when I coined the term "the Nu-Nazi's" in response to SJW's, they all scoffed. Yet metric by metric the term continues to hold true and prove itself.

In this case, the same Nazi domestic terror campaigns they rallied the citizenry into participating in, we're seeing the clear parallels today.

But the larger problem isn't even hardly that there happen to be some 'radical minority' out committing it, nope, the larger issue is how 'everyday liberals' all seem determined to prove themselves to be Terrorist Sympathizers in case after case.

It's time we stop being enablers. This goes for anyone of any walk whom happens to be when it comes to their own group. It's up to all of us to keep our groups in order, otherwise by extension we're terrorists ourselves.

FIN
edit on 21-6-2017 by IgnoranceIsntBlisss because: (no reason given)

You have identified the New Bolsheviks.

It truly is madness that is unfolding. Politics and political correctness have weaseled their way into nearly every aspect of life. It pisses me off. I can't even talk politics with my family anymore because of the endless, parroted straight from the MSM drivel that spews from their mouths. 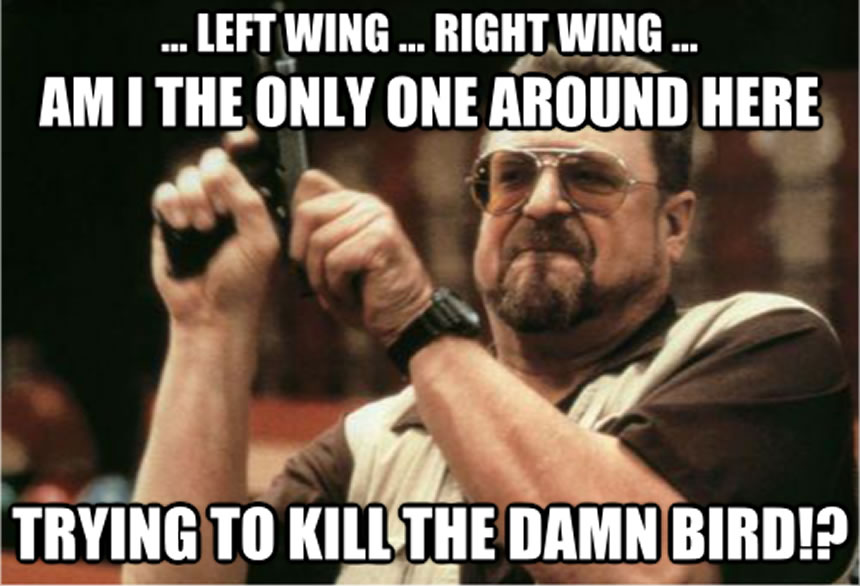 posted on Jun, 21 2017 @ 07:48 PM
link
No offense, but I seem to remember only one of the US presidential candidates routinely used violence and intimidation in pursuit of his political ambitions.

But 99.9999 percent of feminists are appalled by the way some Islamic countries treat women.

originally posted by: Painterz
No offense, but I seem to remember only one of the US presidential candidates routinely used violence and intimidation in pursuit of his political ambitions.


Oh please, do elaborate in detail. Be specific. Thanks!

TL;DR but I'm willing to bet that the same applies to those armed folks at the Bundy ranch and their sympathizers.

I meant what I said.

Didn't you know Ats is the real world just smaller

All I saw was the definition that you posted. That is all it has to fit, not whatever else you chose to be unsympathetic towards.

originally posted by: draoicht
a reply to: Deaf Alien


Are you saying that IgnoranceIsntBless has a simplistic binary thinking? If so then I agree. Many displayed that in various anti-Muslim threads.

Blaine91555
+1 more
posted on Jun, 21 2017 @ 08:10 PM
link
Interesting how some on the Left and some on the Right place all of the other side in a single box. Extremely dishonest considering the vocal radicals only represent a small percentage of the whole. Being a Republican or a Democrat should be a source of embarrassment now for admitting to being a member of either.