It is located in the Old Mosul. The site is where Abu Bakr al-Baghdadi proclaimed himself caliph of the so-called Islamic State on June 29, 2014.

After a long siege, the Iraqi Army on Sunday launched a three-pronged final offensive against ISIS’s last pocket in Mosul, the Old Mosul district in the western half of the war-torn city.

The Iraqi Joint Operations Command announced that the army, Counter-Terror Forces (ICTS) and Iraqi Federal Police are taking part in the final battle to liberate the Old Mosul district.

So I was staying on this for the last few hours. The Iraqi forces were edging closer and closer to the Mosque where ISIS declared the Caliphate in 2014, and then the terrorists decided to detonate and destroy the Mosque. I consider this the self destruct button, and ISIS is folding in Iraq and Syria. I had been updating my Mosul thread since this morning with videos of Iraqi forces approaching the Mosque. With only 300 fighters left in Mosul, I guess they would rather end it all in a hail of glory .

originally posted by: worldstarcountry
June, 18 2017 Footage of the mosque where Al-Baghdadi announced the "caliphate" in the distance as #Iraq's special forces advance towards it.
This just posted, looks like they are just steps away from that Mosque.


Check out the Battle for Mosul for more updates!
Time to chase them to Africa and the Pacific!!
edit on 6-21-2017 by worldstarcountry because: (no reason given)

They must be losing badly.


Iraqi Day 🇮🇶‏
The Civilians of #Mosul are more important than Al-Nuri mosque. We won and we wiped out the shortest caliphate ever to exist. #Iraq 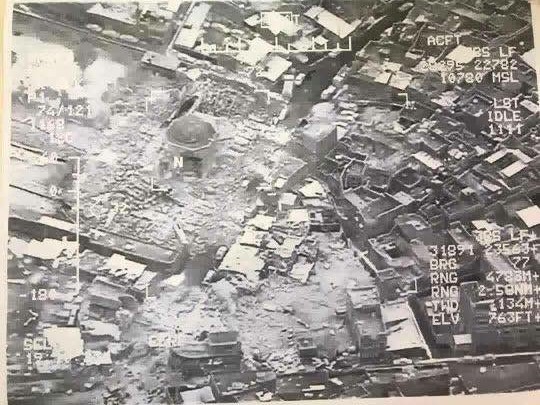 edit on 6-21-2017 by worldstarcountry because: rotating image for eaier viewing

posted on Jun, 21 2017 @ 03:13 PM
link
When World War I ended, there was a certain train car that Germany signed the surrender documents in.

As WW2 drew to a close, Germany blew up that train car, to make sure they wouldn't have to surrender in it again.

How does it not make a certain amount of twisted sense?

This is the mosque where, to all intents and purposes, ISIS was born, or at least adopted. They're losing seemingly, why allow a "memorial" to their defeat to remain standing.

Pure spite. ...and if there's one thing Daesh knows, it's spite.

Nick
Detonation of the al-Nuri Mosque in #Mosul as seen from an Iraqi Special Operations Forces HMMWV. H/t @DerekBisaccio 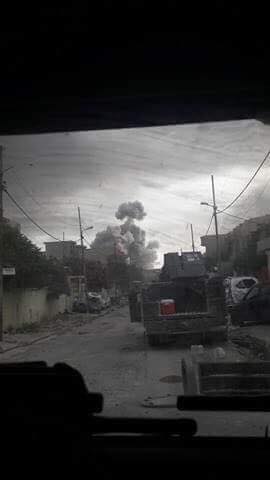 originally posted by: seagull
Pure spite. ...and if there's one thing Daesh knows, it's spite.


For sure. When it comes to destructive anger, ISIS has few equals.


Time to chase them to Africa and the Pacific!!

Nope...time to eradicate them completely and totally.
Get them out in the open where there will be no civilian casualties and carpet bomb them into the abyss.

posted on Jun, 21 2017 @ 03:42 PM
link
In the black & white picture above, what is that small domed structure that's still standing? It looks like it would have been in the center of the mosque.

posted on Jun, 21 2017 @ 03:51 PM
link
a reply to: AndyFromMichigan
It looks like maybe the actual Mosque itself still has its roof maybe?? Here is a recent image from google maps to compare.
I pointed to the Minaret and Mosque. In the drone image, the Minaret would have been to the left from the viewing angle. 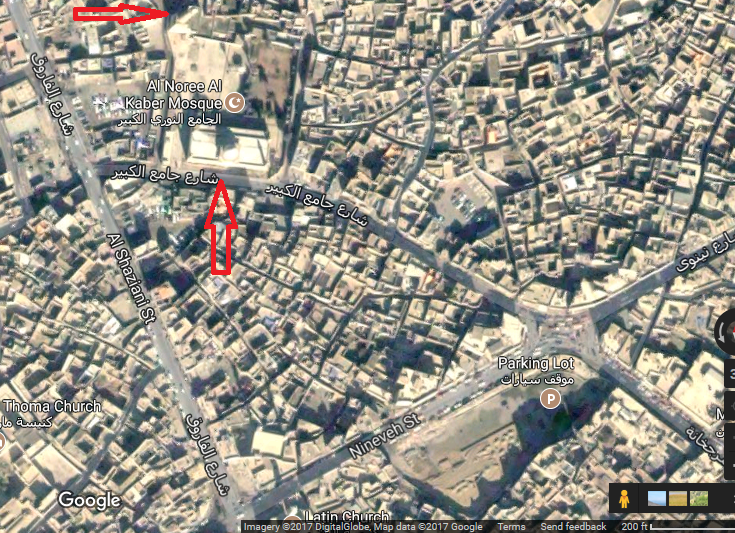 a reply to: DrumsRfun
Well you know thats not how they operate. Which is why we are now fighting them also in the Philippines, Somalia, Nigeria. Who knows what else is coming soon.
edit on 6-21-2017 by worldstarcountry because: (no reason given)

Easier said than done, as we all know. First rule of clandestine warfare...don't hide where you can be attacked without collateral damage. In the fourties and fifties, that wouldn't have mattered a whole lot, 'cause you couldn't attack wholesale without lots of collateral damage. Now? It's well known that it can be done...therefore, carpet bombing, unless they're out in the open, which they won't be if it can be avoided, is out.

But it's plain that something has to give. If they are being defeated by whomever, at this point I don't care who does it, they're going to be even more dangerous.

I've taken a good look at the Google Maps picture, and I think it's the center section of the main building that's still standing.

posted on Jun, 21 2017 @ 04:22 PM
link
a reply to: AndyFromMichigan
Someone posted a video, certainly appears more of a "controlled demolition" than an air strike, that is for sure.
Looks like it was a local video being shown on their news???

Definitely not an airstrike. We can dismiss that claim.

posted on Jun, 21 2017 @ 04:42 PM
link
a reply to: AndyFromMichigan
Anyone who believes it would have to be dense to think we would pick now to strike the Mosque while Iraq's soldiers were mere blocks away.

We could have hit it at any point in the last 3 years! WTF sense would it make to hit it on the eve of liberation???

Thats it, as far as I am concerned, Mosul is free in 48 hours or less.

Except they are far removed from the term 'muslim'.

Wahabists would be more accurate, no?