posted on Jun, 21 2017 @ 09:16 AM
link
In the last two days, Katla volcano in Iceland is once again threatening, with multiple quake swarms- and just in the last hours showing an increase in 2-4 Hz tremor measurements. 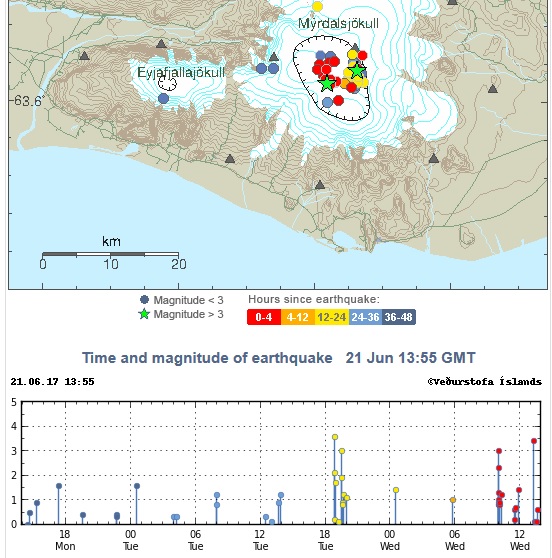 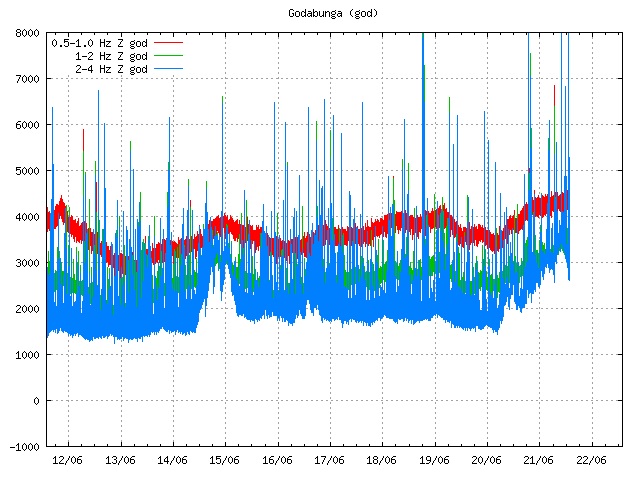 It has done this before without erupting, but ever since its sister erupted, they have been expecting this thing to go off. So far it has not, but one of these days it will.

So it might be a good idea to keep an eye on the Katla cam, and check back, even though today it is currently rainy, and you can't see much:
www.livefromiceland.is...

Katla (Icelandic pronunciation: [ˈkʰahtla] (About this sound listen)) is a large volcano in southern Iceland. It is very active; twenty eruptions have been documented between 930 and 1918, at intervals of 13–95 years. It has not erupted violently for 99 years, although there may have been small eruptions that did not break the ice cover, including ones in 1955,[1] 1999,[2] and 2011.[3]

Prior eruptions have had a Volcanic Explosivity Index (VEI) of between 4 and 6 on a scale of 0 to 8. In comparison, the Eyjafjallajökull 2010 eruption had a VEI-4. The bigger VEI-6 eruptions are comparable to Mount Pinatubo's 1991 eruption.

If Katla blows big, it could cause considerable mayhem, both for the people of Iceland with lahars, and for aviation traffic. So it's worth keeping an eye on the sukka when it starts swarming- like now.
edit on Wed Jun 21st 2017 by TrueAmerican because: (no reason given)

posted on Jun, 21 2017 @ 09:23 AM
link
Last time there was a decent eruption in Iceland European air traffic was grounded for days.
With the story of the f-16 approach to the Russian chief of defence over the Baltic it might not be a bad thing.

Keep the planes on the ground!

I can recommend Jon Frimann's site here as a more regularly-updated source of slightly more in-depth analysis of activity than the official veður.is section.

posted on Jun, 21 2017 @ 09:41 AM
link
a reply to: whywhynot
LOL! Can someone offer a pronunciation guide for the other volcano: Eyja-whatever-the-hell ?

originally posted by: whywhynot
a reply to: TrueAmerican


I swear most of the Icelandic names look like they threw a bunch of scrabble tiles on the floor..

To heck with that

In other words, they just really don't know with it? I think (I may be getting my Icelandic volcanoes confused) that it's one that has a rough cycle of eruptive activity, but beyond that it's strange in that they really can't predict from its day to day behavior what it might be getting ready to do.

Yes it is. It usually does erupt some time after the smaller one nearby. If it does go off at its full power, the flight restrictions will be the least of the problems.

Low crop yields for several years afterwards will do a great deal of damage to Europe, China and the North American Continent.

It would be a very big deal.

Though Katla was quiet today there were earthquakes in Bárðarbunga volcano in Vatnajökull glacier. The biggest was 3,1 on the Richter scale.

Óskarsdóttir says the earthquakes in Katla and in Bárðarbunga are not connected, as the two volcanoes are far apart and don’t draw on the same source.