Now we see Qatar making accusations against the UAE, accusing them of supporting 911. Will Qatar let the world know who was behind the attacks, with clear evidence? What would be the outcome of revealing clear links to the September 11th attacks by the UAE or Saudi? Would the US people demand payback?

Qatar has accused the United Arab Emirates of supporting the 9/11 attacks in New York as a diplomatic war of words between the tiny oil-rich state and its Sunni Arab neighbours continues.

Several Gulf countries and Egypt cut transport and diplomatic ties with Qatar on June 5, accusing it of supporting radical Islamist groups. But Doha has accused the UAE of hypocrisy, arguing that it has had prior involvement in acts of extremism. 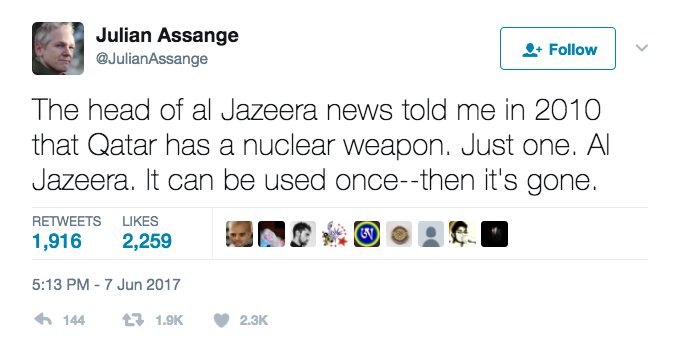 Everybody knows that the Saudis did 911. You could be right. This could be a "nuclear weapon" revealing that they did this once and for all.

posted on Jun, 21 2017 @ 03:01 AM
link
a reply to: Deaf Alien
This is a serious thing that just happened, and I don't even think the diplomats involved realize it. This was a direct accusation of one government to another, and our armed forces won't just pretend they did not hear it.

Now it falls on them to provide some kind of evidence of course, but either way diplomatically, politically and legally I feel these accusations in public are more serious than they are realizing.

posted on Jun, 21 2017 @ 03:03 AM
link
a reply to: worldstarcountry
I can't find exactly what was said by Qatar at the moment, I'll look tommorow if no one has found it by then.

Basically if any side wants American people to hate the rival side they would pin 9/11 to their rival, but like you say it has serious implications.

posted on Jun, 21 2017 @ 03:07 AM
link
No one in the western world will hear of this except us and only half of these people here if not less will actually believe it.


“Emiratis, not Qataris, were among the hijackers who flew planes into the Twin Towers,’’ Sheikh Meshal bin Hamad Al Thani, Qatar’s ambassador to the U.S., said in an opinion piece in the Wall Street Journal Sunday.
“The UAE was singled out in the 9/11 Commission’s report for its role in laundering money to terrorists.”


Its still though, he put it out there in the Wall Street Journal, so there should be some commotion about it. WSJ aint no tabloid, even if it is an opinion column!
edit on 6-21-2017 by worldstarcountry because: (no reason given)

posted on Jun, 21 2017 @ 03:36 AM
link
It's interesting that they did not accuse Saudi Arabia. I believe they were the ones behind the attack. It would be interesting to see what evidence they have and if this connectes to Saudi

Would the US people demand payback?

More payback ? The bombs have been dropping fairly consistently since that attack on the towers, how much payback will be enough ?

This all seems a little too easy, maybe just release a report on Iran being involved next and voila ! more payback needed.

originally posted by: hopenotfeariswhatweneed
Why stop there ?


Indeed, North Korea needs to count its blessings, and we can expect close in air support coming to a Philippines near you!


Intellasia
Indonesia, Malaysia, Philippines to join forces against ISIS terrorists.
USA special forces have joined the battle to crush Islamist militants holed up in a southern Philippines town, officials said on Saturday, as government forces struggled to make headway and 13 marines were killed in intense urban fighting.
He added that Indonesia and Malaysia have offered to share intelligence information to crush extremism at the regional level.


Oh I really relish this part


As the fight against ISIS-linked Maute militants continues in Marawi City, the Philippines this week appeared to reverse its position on worldwide military cooperation.


But, dont call it ww3
whos not a colony anymore Rodrigo?? It is really fascinating seeing history unfold. I wonder if all generations before us were as oblivious to such grand scemes as we have collectively become today??

. I wonder if all generations before us were as oblivious to such grand scemes as we have collectively become today??

I believe the general consensus is it takes three generations to forget the hell suffered and history repeats.

posted on Jun, 21 2017 @ 04:36 AM
link
Don't forget... we also have Hillary on email record stating that the US was very much aware of UAE funding IS back in august 2013, yet chose not to act on it. In fact the US as this year, back then made a HUGE weapons deal with the Saudis.

Dunno why this isn't brought more to attention. We have the former sec state literally writing that intel shows the Saudis are causing terrorism, yet nothing is done from any side to hold the Saudis responsible?

Now Qatar is being targeted... home of Al Jazeera, now isn't that convenient. At the same time UAE are being friendly towards Israel?!

Wow, so many alarm bells going off that you can't fathom the connections in all of this.

Nope. A nuke is a nuke and evidence is evidence. But Assange isn't Assange anymore, so there's that as well.

The Saudi involvement with 9/11 is an old hat but they didn't delete the GIANT KILLER data, did they? Mere pawns, which is probably the reason why you folks keep selling them so much weapons.

Put up or shut up, al Jazeera.

posted on Jun, 21 2017 @ 07:03 AM
link
The more critical event took place a few hours ago when Mohammed bin Salman was place next in line for Saudi throne.

This is a major escalation in more than one area.

Care to elaborate? He's Minister of barbaric attacks on Yemen and the face of their Vision 2030 project, I don't see any major escalation in this specific event.

8 trillion dollars is at stake and if Trump pushes it then more juicy info will probably served , like how Kennedy liked inappropriate sexual conduct or even who actually killed him.

posted on Jun, 21 2017 @ 09:38 AM
link
Qatar could spill the beans on 911 and RT and Al Jazeera can scream their lungs out but the rest of the media is bought and paid for, don't think it would do much to wake up the sheeple.