I mentioned bacon in a thread just recently and since it's my 6th ATS birthday today I thought bugger it, it's bacon pie time.

I would also like to note that there used to be a lot more bacon on this site. I'm pretty sure there are some crackling bacon threads that have been authored over the years, sadly though they have fallen away to make way for all of that partisan rubbish.

Anyway, and without further ado, feel free to plunge your face into this baby. 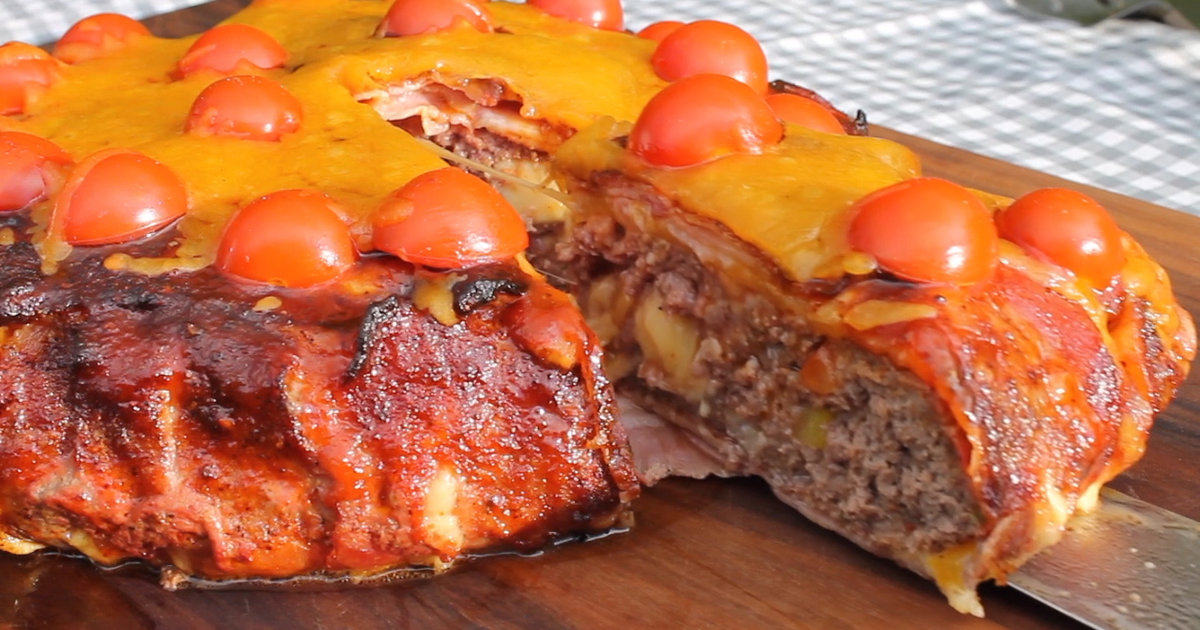 Is that bacon encrusted meat loaf? Recipe? < wipes drool from side o mouth >

There is far too much burger in your bacon image!

Heat grill to 400°F.
Fan bacon slices out from the center of a large skillet, and sprinkle with barbecue rub.
In a large bowl, combine ground beef, barbecue rub, diced Gouda, and diced bell peppers. Thoroughly mix and knead the contents with your hands.
Fill the bacon-covered skillet with the beef mixture, patting it into place with your hands. Finish with cheddar, and fold the ends of the bacon over the pie, adding more slices to cover the top until the meat is fully enclosed. Sprinkle generously with more barbecue rub.
Place the skillet on the grill, cover, and cook with woodsmoke at 400°F for approximately 45 minutes.
Make The Sauce: In a medium-sized pot, combine ketchup, apple purée, apple juice, apple cider vinegar, soy sauce, and bourbon. Bring to a boil, stirring occasionally.
Extricate the pie from the skillet, and set it back on the grill to cook over open fire for an additional 20 minutes. Half-way through, brush it with the apple-bourbon glaze.
Finish with halved cherry tomatoes and grated cheddar, and serve.

Thank you for the recipe


ETA:Just like ice cream on a slice of pie, me thinks a good scoop of mashed taters on top of a slice of this would be just dandy!
edit on 1pmf30084130 by waftist because: (no reason given)

You got a fine looking burger there.
Mmmmmmm

Man, that's one hell of a volcanic cheese burger.

My thoughts and prayers are with you at this obviously difficult time, mmmmmmmmmm bacon.

Coat everything , and throw on grill -or oven.

Hey I live in a small apartment I know I can just bake this but do you have any alternatives for cooking over the open grill? I'm not allowed to have one. (I am referring to the last 20 min)

Mate that sucks not being allowed a grill, not even outside ?. I'm assuming it's a fire alarm thing, anyway, the only alternative to an open grill I can think of is a cast iron grill pan which should have ridges on it.

posted on Jun, 14 2017 @ 07:18 PM
link
i am 51 years old darn near gave me a heart attack just looking at it .
But my second faveret way i would like meeting my maker .
1 is being smothered to death by the Dallas cowboy cheerleaders . Mind you it must be the whole squad not just 2 or 3 .