Is Loretta Lynch about to get murdered / suicided?

page: 1
75
<<   2  3 >>
log in
join
share:
AndyFromMichigan
+40 more
posted on Jun, 9 2017 @ 08:38 AM
link
Probably the biggest bombshell out of Comey's testimony yesterday was his testimony, under oath, that Loretta Lynch told him to call the Clinton investigation a "matter" and not an "investigation." (And Comey complied, even tho he clearly realized it was an inappropriate request.)

Altho you can be sure the MSM will ignore this, Lynch probably wet herself when she heard that testimony. As Grambler pointed out in his analysis thread, Comey effectively testified that the Attorney General (Lynch) was colluding with the target of an FBI investigation (Clinton). That's a clear case of obstruction of justice. At a bare minimum, it's a huge conflict of interests. Lynch can now be subject to an investigation into her own actions as AG.

Given the habit of Clinton associates to suffer untimely demises, I can't help but wonder if Loretta Lynch now has a huge bulls-eye on her back. Maybe she should go into hiding with Comey's buddy who read the notes over the phone.

It's check-mate! And their move

If dominos start falling up hill they have a problem

Only time will tell...

Why did Comey not do what was right when Lynch conspired?

The whole system is bogus, Comey-Clinton and Lynch should be in prison. But anyone reading this want to guess who gets prison time?
edit on 9-6-2017 by seasonal because: (no reason given) 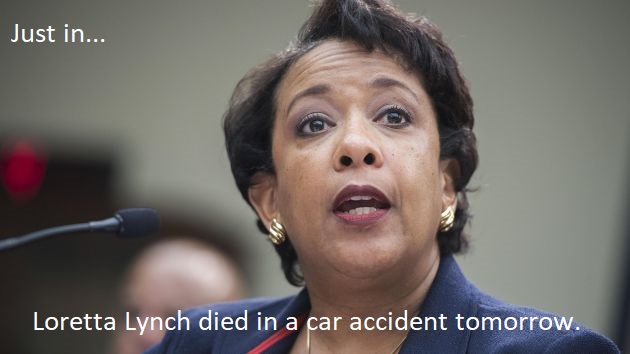 Because Comey has a habit of protecting the Clintons...

originally posted by: Throes
I don't think so. I think it's too high profile.

Also Loretta Lynch's car crash is being discussed by the Clintons.

originally posted by: toysforadults
Also Loretta Lynch's car crash is being discussed by the Clintons.

Yeah Chelsea was asking her parents why they smelled of brake fluid...

I want her to spend her remaining day's in a cell like the criminal she is.

You raise a good point, she definitely did just become a huge liability to the Clintons, but perhaps that would be to public of a thing for them to attempt.

Although I wonder what she would have to say if her liberty was on the line, she very easily could tell them everything she knows about the Clintons.

Comey openly stated that he orchestrated a special investigation for Trump and stopped one for Hillary.

The only people that have to obey the laws and rules are anyone other than the leftist authoritarians.

All I know is that it will likely take a good 8 years or so to complete all the necessary investigations into the corrupt left.

Therefore, remember to Rock The Vote over the next several years!!!

Comey openly stated that he orchestrated a special investigation for Trump and stopped one for Hillary.

The only people that have to obey the laws and rules are anyone other than the leftist authoritarians.

Eff that DBC - there is still hope as long as an outsider resides in the WH.

Let's flip the script and demand corrupt individuals be held accountable. Let's get all Gowdy on their asses
edit on 2218x6722America/ChicagovAmerica/Chicago6 by six67seven because: (no reason given)

Perfectenemy
+7 more
posted on Jun, 9 2017 @ 09:19 AM
link
One of our members raised an important question in another thread. Could a investigation into Lynch for obstruction of justice lead to nullifying all the immunity deals from the Clinton investigation?

originally posted by: Perfectenemy
One of our members raised an important question in another thread. Could a investigation into Lynch for obstruction of justice lead to nullifying all the immunity deals from the Clinton investigation?


If it can be established that the deals were offered in order to obstruct justice, then I'd think this should be possible.

ETA: Even a verdict of "not guilty" can be set aside if it can be proved that the defendant bribed/threatened the jury to acquit him.
edit on 9-6-2017 by AndyFromMichigan because: (no reason given)

What Comey specifically said about Lynch is very damning. The request for him to use "matter" instead of "investigation" is interesting, but not a bombshell.

What he said about the tarmac meeting and his decision to come out to the public the way he did is much more telling.

Something happened or was said in the meeting that really concerned him. I have to wonder if that is being investigated.

As far as her being "suicided", I doubt it. That conspiracy about Clinton "body counts" is ridiculous.


Edit to add:
The true losers are the people of the US.

We will probably never be able to trust government ever again.

We know we live in a bannana republic.

originally posted by: tadaman
They are all so corrupt. They believe in nothing.

They believe in loyalty... to each other... which I hope waivers very soon.

Certain individuals will soon be faced with a very serious decision: Take one for the team (no talky) or save their ass (talky)

lordcomac
+2 more
posted on Jun, 9 2017 @ 09:51 AM
link
No justice will come to the Clinton's, they have powerful friends everywhere.
No reasonable prosecutor would take that on for fear of death, and if we do see one take them in they'll have been bought and paid for before the announcement, and both sides would work together to throw the trial- in addition to the judge being paid off. It'd be a show of it did happen, no more than a soap opera.

Anyone who claims the Clinton body count conspiracy is rediculous hasn't done any research on it. They've got a coroner who has been shown to lie about cause of death, including saying some kids *fell asleep* on train tracks, and were run over. Two different kids. At the same time. Heck, there's even video of someone dressed as an FBI agent stealing the black box from a plane crash that killed some Clinton enemies- official story is the box was never found.