posted on Jun, 8 2017 @ 06:06 AM
link
I am putting this in the political mud pit because there will no doubt be those who totally disagree with the article. I found the article interesting simply because of the way PUTIN has managed to turn Russia's economy around inspite of the best efforts of the west to hamper his efforts.
It is a rather long article which goes into all kinds of reasons why the west tried and failed to bring Russia to heel and is worth a read IMO.

Under these dreadful circumstances, Putin became the Acting President of Russia on Dec 31, 1999. Over the next few years, he took on the powerful oligarchs, corrupt politicians and the elites who formed the fifth column. With authoritarian KGB-style, he assassinated some pro-Western journalists, jailed opponents and consolidated his power. Putin was helped by raising oil prices, but he used the new wealth wisely. He grew the Russian economy, built up gold and foreign reserves, and significantly reduced the national debt.

Finally, Putin rebuilt Russia’s military, crushed Islamic terrorists and, in a geopolitical stunner that transpired in Syria, prevailed against a mighty coalition of the US, Israel, UK, France, Turkey, Saudi Arabia, Qatar and 40,000 jihadists. 8

Putin’s diplomacy has also been remarkable. After the 2014 US sanctions and the precipitous fall in oil prices, every pundit and politician predicted the isolation of Putin and the demise of Russia’s economy. Fast forward to 2017, 144 US corporations and 62 countries attended Russia’s Economic Conference in St. Petersburg. In France, the new President, Macron, chose Putin for the first visit of a foreign leader.

As a foot note during the 90s I had a friend who went to Russia with $250,000 USD and bought diamonds.. His $250,000 turned into 5 million USD when he returned to the states.. Two other guys went back later and tried to do the same deal... They were both killed because the Russians by then had learned how much money they had lost and how badly they had been screwed on the original deal. I remember deals for front line Russian fighter aircraft that could be had for 1/10 the cost of an American F-16s. One guy made a fortune selling Subway sandwiches.. Those were the wild west days of wheeling and dealing for sure.

One guy told me flat out during those times that dealing with the Mafia was the way to do business.. They would tell you the total price and would deliver on time on schedule.... The government would nickel and dime you all the way to the dock and would end up costing ten times more in time and money if you could ever get what was promised to begin with..

The government would nickel and dime you all the way to the dock and would end up costing ten times more in time and money if you could ever get what was promised to begin with..


Like it is in the West now. He broke that yoke over there... maybe we should hire him to come here and 'clean our house'...

posted on Jun, 8 2017 @ 06:53 AM
link
Russia has a fraction of the population of the US. Russia is on the defensive. To say Russia is a threat to the US is laughable. That said, CIA has a goal to break up Russia the way Yugoslavia was broken up.

posted on Jun, 8 2017 @ 07:17 AM
link
I still wish Putin could be our president. His policies are a little scary sometimes, but he gets the job done.

the Russian people are the epitome of sheep. lol.

Doesn't Russia have the worst wealth inequality in the world?

I guess can't all be roses.

posted on Jun, 8 2017 @ 08:34 AM
link
I love seeing these pro-Russia threads and all the knob-polishing comments that follow... from people who have never set foot in the country. What goes on in Russia has little to do with Putin. He's simply the front-man. The public image that is trotted out for branding purposes. Russia is controlled and operated lock-stock-and-barrel by the Russian mafia. They control every aspect of business and most of the society. If you don't believe me, go there for 3-4 days and then come back and call me a liar. I've seen it first-hand. I've been there. It ain't pretty. And it is nothing like the ATS fantasy that everyone seems so eager to lap up.

originally posted by: Aldakoopa
I still wish Putin could be our president. His policies are a little scary sometimes, but he gets the job done.

Where do you live, Ukraine?

posted on Jun, 8 2017 @ 02:07 PM
link
I'd be willing to admit that the reason that Western leaders hate Putin is because he's a maverick. When it comes to the people of the West however, they hate him because he's effectively a dictator that is only out for his own well being.

You can argue that Russia's economy improved under Putin, and that would have been true up until 2014. After the annexation of Crimea Russia's economy tanked thanks to the political blowback and it hasn't really recovered. Not only that but they have still failed to diversify their exports beyond oil.

Then of course there's also the fact that the oligarchs still more or less run Russia. The only difference now is that the oligarchs of the past are gone to be replaced by Putin and his friends. There's no doubt that Putin has used his position to pad the bank accounts of him and his inner circle. Just look at the fact that some estimates state that Putin is the richest man in the world while more conservative estimates put his net worth at only $50 billion. That's not coming from his presidential paycheck.

Corruption also still runs rampant in the Russian military. After nearly getting the butts kicked in Georgia Putin vowed to reform the military but it seems like not much has changed. They're still dependent on conscripts that only serve a year, including training. Their air and sea fleets are both in desperate need of repair and replacement. And large sums of money still find their ways in to the pockets of officers.

The social policies enacted under Putin also give citizens of the West reason to hate him. There's the crackdown on homosexuality. There's the curtailing of free speech. There's cases of people being jailed for speaking out against the government. And then of course there's the assassinations.

Has Putin helped Russia? It's hard to say. If you live in one of the major cities you're probably doing as well if not better. If you're living in a rural area odds are you're doing worse. So the claim that the West hates Putin because he has been a boon to Russia doesn't really fly. In fact for most of the time Putin has been in office the West and Russia have been allies. It's only after Putin became more totalitarian and imperialistic (which funnily enough marked the beginning of Russia's current woes) that the West turned against him. In fact the West invested heavily in Russia's success following the collapse of the USSR. So the claim that Russia's success is the reason for the hatred of Putin is just more pro-Putin propaganda.

Sorry which country are you writing about again? Russia or the US?

Clearly I'm talking about Russia. The US economy is fairly strong. Especially when compared to Russia's economy post-2014. The US military also does not have anywhere near the number of problems that are rampant in Russia's military.

I understand why you would ask that question though. It seems to be the only kind of rebuttal Putinistas have when their Dear Leader is criticized. Even when the question is not apt. 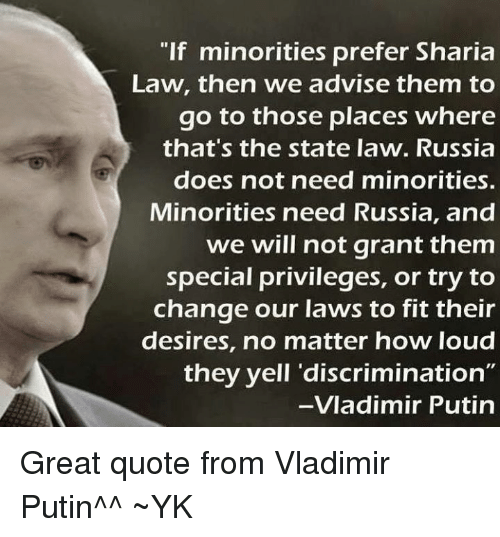