Documents released by the FBI Records Vault have revealed a troubling connection between figures associated with Chinese communist affiliated protest groups in the 1960’s and 70’s and Bay Area politicians. The FBI identified a number of individuals who were working with groups that were militant and Chinese-oriented in nature. Today, these individuals are involved with organizations who financially and politically support figures tied to protest groups operating in San Francisco, including the far left movement By Any Means Necessary (BAMN). The parties involved in support for these protest groups are also tied to institutions connected to billionaire George Soros.

The progressive advocacy organization Wellstone Action was founded by Jeff Blodgett to train community organizers, student activists, campaign staff, progressive candidates and elected officials. Based in Minnesota, it also runs the Wellstone Democratic Renewal Club in Berkeley, California. The club is an attempt to foster a “grassroots movement for progressive change” which participates anti-Trump protests in the San Francisco Bay Area as well as promotes the notion that the Russian government interferes in U.S. elections. Partners of Wellstone Action include the Bush Foundation, The Ballot Initiative Strategy Center, the Service Employees International Union (SEIU) and the George Soros funded organization Moveon.org.

The Wellstone Democratic Renewal Club and Wellstone Action are also affiliated with a PAC bearing the Club’s name. The Center for Responsive Politics lists the PAC’s treasurer as Floyd Huen. Huen is the husband of Oakland mayor Jean Quan. A page showing the PAC’s 2016 donations reveals that donors included The Wellstone Club, Floyd Huen and Wilma Chan, a California Assemblywoman who served as California State Assembly Majority Leader from 2002 to 2004.
...

Here is a link to the FBI vault which has 4 lengthy documents. Included is the excerpt from the link.

Asian American Political Alliance - The Asian American Political Alliance was a protest group formed at the University of California, Berkeley, in 1968. This release covers the FBI investigation of the group and its leaders from 1969 through 1972. The FBI was especially interested in the contact the group or its members had with Chinese communists abroad.

In sum, what these documents, and the evidence included attest to, and verifies is the fact that the Chinese Communist Party had founded since at least the 1960s and 1970s far left groups in the United States, which to this day are trying to shape American politics to fit the goals of the CCP.

Here are some images of the FBI documents which include manifestos from groups like Asian-American Political Alliance (AAPA).

The goal of this conglomerate of far left wing groups which are directly linked to the CCP was among others, to "redefine their relationship to the Black, Mexican-American and Indian liberation movement, to redefine their relationship to a nation which now shows every evidence of liquidating Black people". As well as to oppose the Vietnam war, which in their own words: was "waging the politically and morally insane war in Vietnam". Of course, those far left groups forget that it was the CCP who started the Vietnam war. 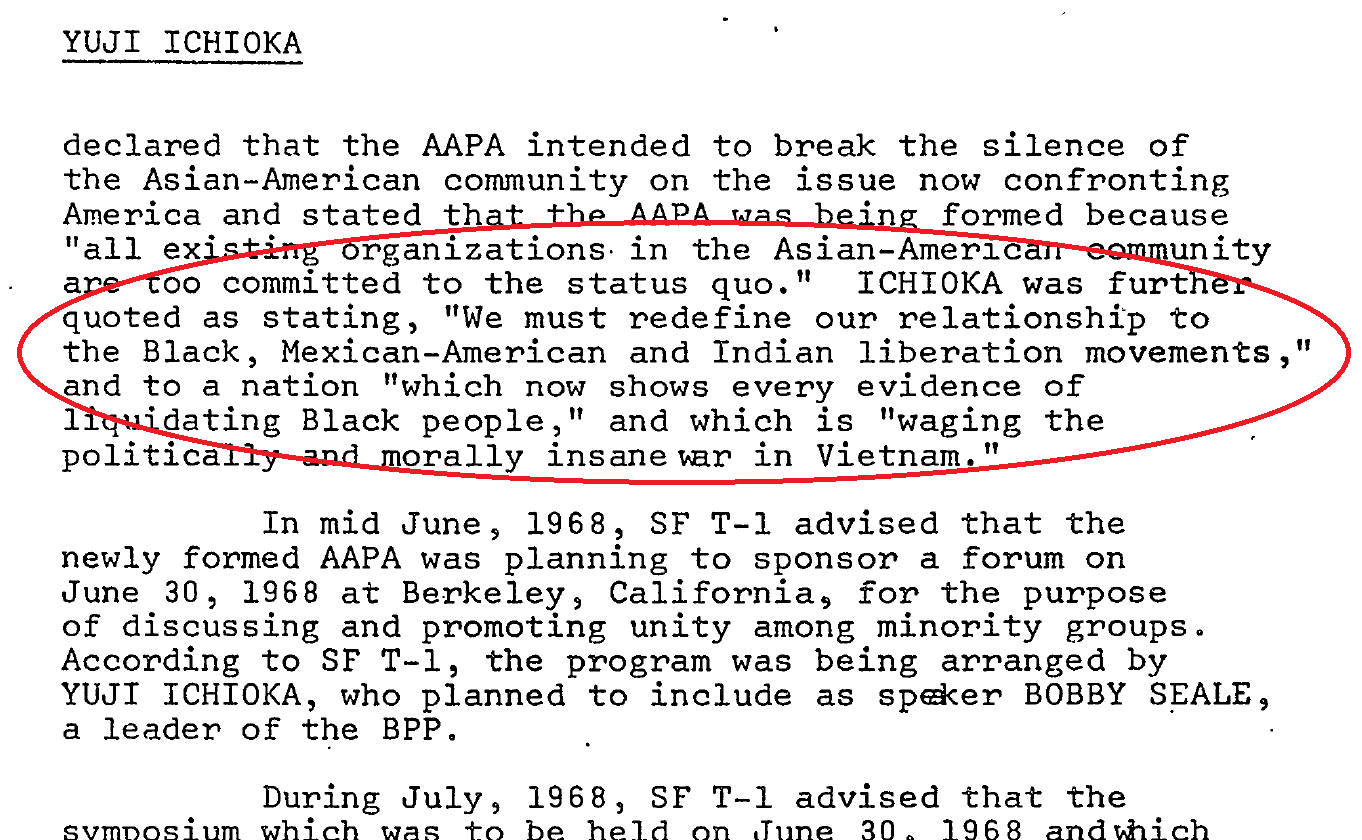 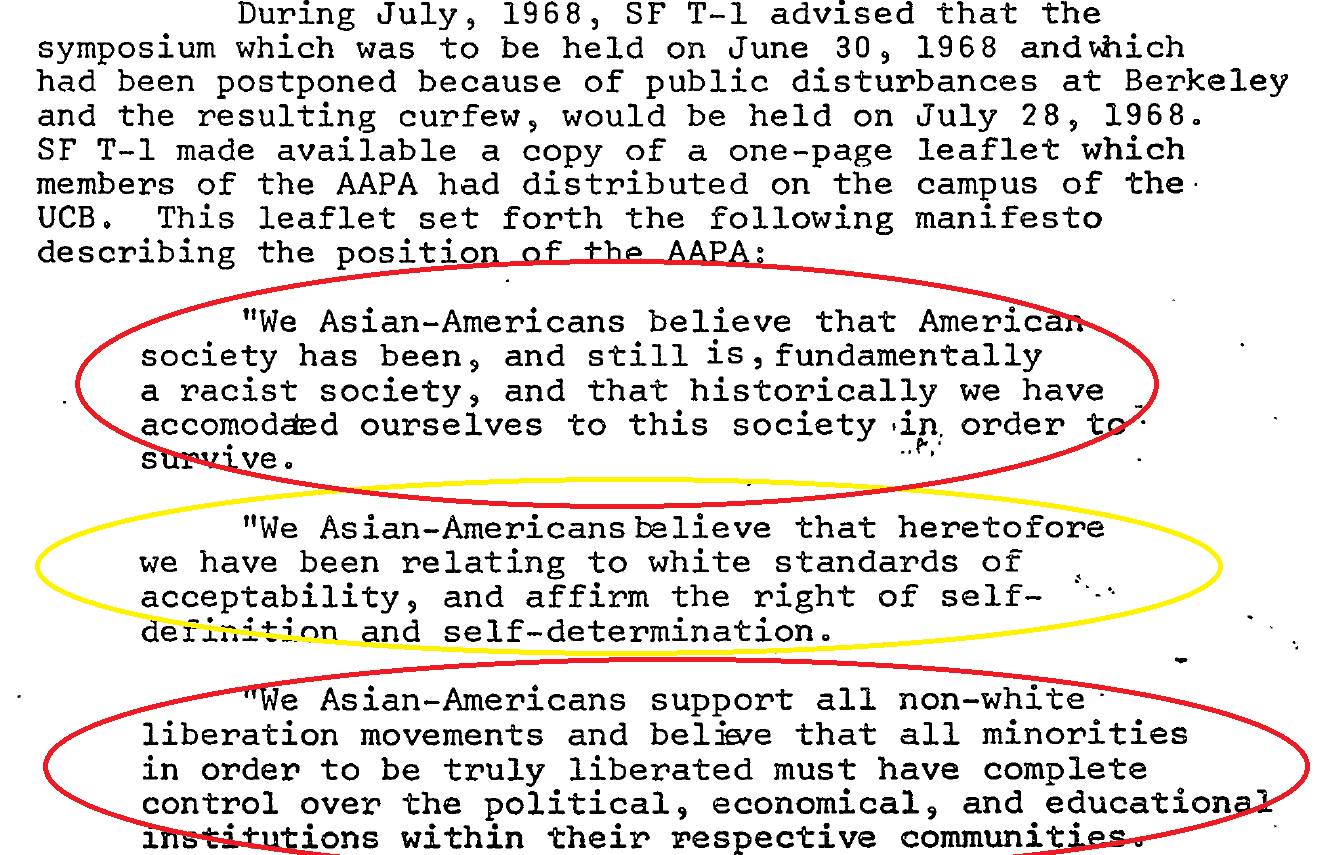 These groups can also be linked to none other than George Soros, and other groups affiliated with the liberal multi-billionare. 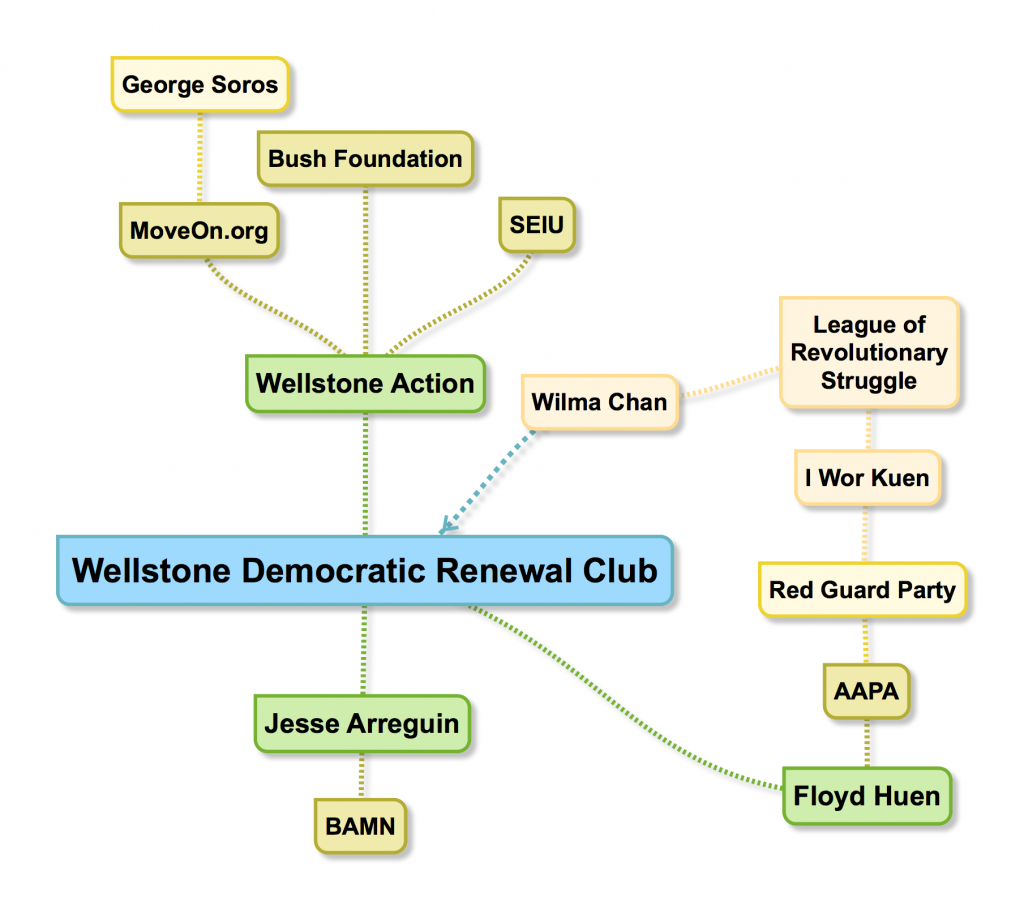 Incidentally "By Any Means Necessary" (BAMN) AKA "The Coalition to Defend Affirmative Action, Integration & Immigrant Rights, and Fight for Equality By Any Means Necessary", is one of the far left wing groups which has been waging a campaign against conservatives and President Trump's supporters. BAMN's parent organization has worked directly with the pro-pedophilia organization known as "the North American Man/Boy Love Association" (NAMBLA). What's more, a member of the parent organization of BAMN is an admitted member of NAMBLA.

The Center for Responsive Politics lists Floyd Huen as the PAC's treasurer. Huen happens to be the husband of former Oakland mayor Jean Quan. The 2016 PAC's donation shows that donors included The Wellstone Club, Floyd Huen and Wilma Chan. Chan was a California State Assembly Majority Leader from 2002 to 2004.

Wilma Chan wrote in an article she published in 1982, that a Chinese immigrant told her "how China was ravaged by the U.S. and other foreign nations". She also explained how many other "marxist-leninist" Chinese immigrants had impacted her thinking.

...
It was not until I was in college in the late 1960's that, through learning more about Chinese American history and doing actual organizing work among immigrants in the Chinese communities of Boston and San Francisco, I came to have a deep respect for Chinese immigrants, particularly immigrant working people.
[bIn this regard, many inspiring individual immigrants impacted my thinking.
...
He talked about the sad and painful experience of leaving a China ravaged and torn by U.S. and other foreign powers, and of the extreme discrimination and hardships in the U.S. during the Depression.
In response, a group of Chinese had gotten together to form the Chinese Workers Mutual Aid Association, a community mass organization of over 600 members, to organize Chinese workers into the U.S. trade unions and to support the liberation struggle in China. He told me about how many Chinese immigrants had joined left movements, many becoming Marxist-Leninists, to fight to change the fundamental inequalities that Chinese in the U.S. face.
...
This understanding, taking place over several years, helped me to reorient my life toward Chinese people, to become a Marxist-Leninist and to deal with the complex questions of uniting immigrant and American-born Chinese and to build a powerful Chinese National Movement which, together with the movements of Blacks, Chicanos and all oppressed peoples in the U.S. and US. workers, would fight for fundamental change in society.
...

edit on 6-6-2017 by ElectricUniverse because: add and correct comment.

posted on Jun, 6 2017 @ 10:13 PM
link
The article from "disobedientmedia.com" Puts the nail in the coffin as it illustrates the links between the CCP, far left wing groups in the U.S., and George Soros.

...
Soros has spent hundreds of millions supporting various anti-government movements, including the Women’s March, the People’s Climate March, the Tax Day protests and far left Berkeley protest group Refuse Fascism. The ACLU also began actively organizing and training protest movements just one month after Soros sank $35 million into the group. On May 26th, 2017, Disobedient Media reported that Soros was also supporting groups who were using the net neutrality movement as a means of promoting censorship of alternative and conservative media outlets.
...

We can see now how all of these far left protests we have been seeing increasing are using the same types of argument used by Marxist-Leninist groups tied to China's Communist Party in the 1960s-1970s.

It is only obvious, and a fact that far left wing groups, with or without knowing this, are to this day working for the same goals that China's Communist Party has been working for.

edit on 6-6-2017 by ElectricUniverse because: add and correct comment.

And they complain about the Russians being involved with the elections.

These far left groups are proud of their history. In the following article published on January 24, 2017 LAweekly.com mentions how today's far left groups can learn from these past Marxist-Leninist groups. Of course, the LAweekly article makes no mention of what the FBI investigation from the 1960s-1980s uncovered, or the links these far left groups have to China's Communist Party.

What Today’s Protesters Can Learn From the History of L.A.’s Asian-American Movement

I watch Chris Chapel, his YT channel, china uncensored, is pretty legit and gives you some nice little nuggets. Like one of his host has photos of the tiananmen never seen before, pretty cool stuff.

Anyways, we need a tougher stance on this idiots.

The CCP is still, today, actively seeking to influence and persuade you.

posted on Jun, 7 2017 @ 01:00 AM
link
Looks like I was dead on when I called those groups out for acting like red guard groups during the chinese cultural revolution.

Ummm, not Russian.
Find a link to Russia and the MSM will cover it.

posted on Jun, 7 2017 @ 04:21 AM
link
All the Russian BS was made up by Democrats,all you have to do is see who has most money at stake in the US,Russia nothing,China? everything,the liberals even dress like the comunist's ,very evident

If this would be real...
How does the own medicine taste?
Is it hard when the boomerang returns and hits your head?

I mean, i just say Ukraine, who payed millions of dollars to pro-west protesters there...?