Trump and Khan have been occupied with some Twitter jabbing lately.

Now it's getting serious.

Some other public politicians are speechless.


The London mayor, Sadiq Khan, has called on the British government to cancel a planned state visit by Donald Trump after being criticised in two tweets by the US president.

Trump initially criticised Khan for his response to the London Bridge terrorist attack; though, in doing so, he misquoted London’s mayor. Khan’s office pointed out Trump’s error later but the president responded by accusing London’s mayor of making a “pathetic excuse”.

Appearing on Channel 4 News on Monday evening, Khan said Trump was wrong about “many things” and that his state visit should not go ahead.

and14263
+17 more
posted on Jun, 6 2017 @ 09:57 AM
link
Rather than have open discourse in a mature fashion, perhaps coming to a mutual understanding of each other's motivations... Khan wants to stop Trump visiting the country?

This mayor of London is turning out to be a real child. Where is Boris when you need him?

I notice Khan states "His policies go against everything we stand for..." Well Mr Khan, I've got news for you... The leftist Guardian moral high grounders might pander to your sloppy nonsense but YOU go against my policies more than Trump!!

but really, who cares ?

Trump is such an utter disgrace to the species, that he should never have been offered a state visit in the first place, and having made a total arse of himself, in the wake of a terror attack no less, the one which was planned ought to be cancelled. To say that in the direct aftermath of the incident in London was not the correct time to make ANY sort of criticism of the Mayor of London, is to somewhat understate the issue, which anyone who is of the correct calibre to be given the honour of a state visit here, ought to know perfectly well, without being told by his PR analyst. Unfortunately, the United States of America elected someone who cannot even pretend to have a heart, a soul, or a functioning brain stem, and instead selected the most ignorant bag of cat vomit imaginable.

His sort are better off staying on whatever plane they arrived on.

As a liberal, I'd rather have Trump than Pence. Just saying.

Fits right in with Trump.

Let's call it a play date and it will surely work out.

Ah Britain, truly the home of tolerance and free speech!

originally posted by: 4N0M4LY
Khan is such a childish coward. Needs to read a book on how to grow up and act like a REAL mayor.


But it was Trump that was the Draft dodger, remember?

Middleoftheroad
+1 more
posted on Jun, 6 2017 @ 10:15 AM
link
This is funny, Mr. Khan gets one disagreement and now doesn't want to meet. I say cry it out Mr. Khan and when you're ready to put your big boy pants on, I'm sure Trump will reschedule.


originally posted by: 4N0M4LY
Khan is such a childish coward. Needs to read a book on how to grow up and act like a REAL mayor.


But it was Trump that was the Draft dodger, remember?

Konduit
+20 more
posted on Jun, 6 2017 @ 10:22 AM
link
Reminder: Mayor of London Sadiq Khan was a lawyer for a 9/11 terrorist Zacarias Moussaoui and has ties with Islamist movement worldwide.

They can't even vet their own Mayor.

What, like an American Mayor? No thank you very much. Its bad enough that you have those upstart morons running things in your cities.

Our major cities have been in existence for a greater amount of time than your country has had a flag, and we will elect to run them precisely who we see fit, to run them in a manner in accordance with our preferences, not the frankly mindless, reductionist waffle we hear from US Mayors, and for that matter other political figures from the US.

If we were running our Mayoral elections like a competition to find the most intellectually vacant stack of damp rags we could lay hands on, we would have ended up with a Giuliani or De Blasio as well. I am glad that we did not.

You are in a glass house on that front.

Your country is currently the epicenter of an explosion of human rights failures, warrantless invasion of privacy, and has a President who wants to turn back the clock forty or more years in terms of civil rights. So essentially, take the beam out of your eye, before you pick at the speck in mine.

JinMI
+17 more
posted on Jun, 6 2017 @ 10:26 AM
link
Extremist attacks should be expected and more immigrants welcome but not the potus?

When the armed forces are no longer in your streets and civil liberties are properly returned to the British peoples, you would certainly have grounds for that argument.

Khan only has the best interest of London, and the UK at heart. No agenda here 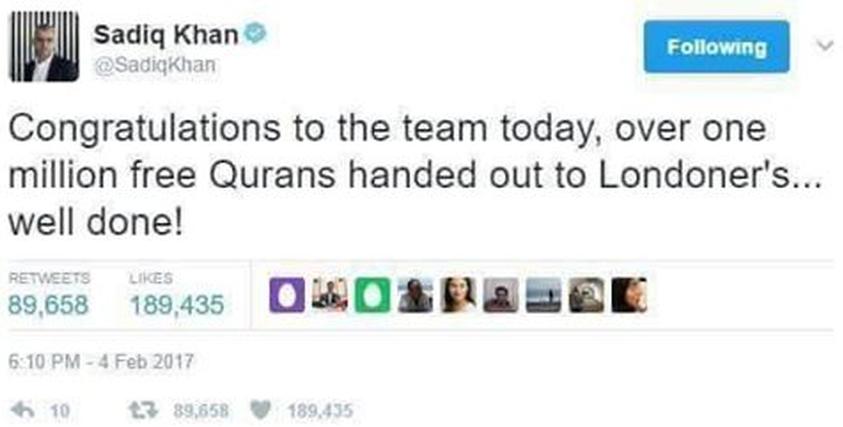 You're right. Warrantless wiretapping, NDAA, setting race relations back 40 years. Obama really did a number on this country.

But it's still better than a country that is currently the epicenter of an "explosion" of Jihadi suicide bombers.