This is pretty big. While the report was given to the Intercept anonymously, the fact that the NSA requested A) it not be published and B) that redactions be made before it was, indicated this an authentic report.

A fairly lengthy, but enlightening article about how Russia (Russian Military) attempted to influence the election, through software connected to voter databases/registration/etc.

The NSA and the Office of the Director of National Intelligence were both contacted for this article. Officials requested that we not publish or report on the top secret document and declined to comment on it. When informed that we intended to go ahead with this story, the NSA requested a number of redactions. The Intercept agreed to some of the redaction requests after determining that the disclosure of that material was not clearly in the public interest.

As a very brief summary of the possible intent of the attack(s):

While it is mostly unknown how successful the attack was or what it exactly accomplished, it seems to indicate that by installing malicious software they could disrupt/alter voter registration roles, removing data (voters) from those roles, altering voter eligibility, mimic an absentee ballot provider, etc.

Purpose: undermine and alter the US democratic process.

Russian military intelligence executed a cyberattack on at least one U.S. voting software supplier and sent spear-phishing emails to more than 100 local election officials just days before last November’s presidential election, according to a highly classified intelligence report obtained by The Intercept.

The top-secret National Security Agency document, which was provided anonymously to The Intercept and independently authenticated, analyzes intelligence very recently acquired by the agency about a months-long Russian intelligence cyber effort against elements of the U.S. election and voting infrastructure.

The report indicates that Russian hacking may have penetrated further into U.S. voting systems than was previously understood. It states unequivocally in its summary statement that it was Russian military intelligence, specifically the Russian General Staff Main Intelligence Directorate, or GRU, that conducted the cyber attacks described in the document: 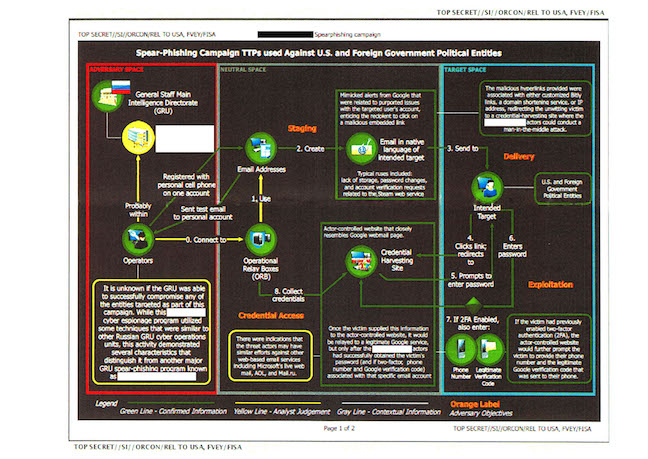 The NSA has now learned, however, that Russian government hackers, part of a team with a “cyber espionage mandate specifically directed at U.S. and foreign elections,” focused on parts of the system directly connected to the voter registration process, including a private sector manufacturer of devices that maintain and verify the voter rolls.

As described by the classified NSA report, the Russian plan was simple: pose as an e-voting vendor and trick local government employees into opening Microsoft Word documents invisibly tainted with potent malware that could give hackers full control over the infected computers.

But in order to dupe the local officials, the hackers needed access to an election software vendor’s internal systems to put together a convincing disguise. So on August 24, 2016, the Russian hackers sent spoofed emails purporting to be from Google to employees of an unnamed U.S. election software company. . . The spear-phishing email contained a link directing the employees to a malicious, faux-Google website that would request their login credentials and then hand them over to the hackers. The NSA identified seven “potential victims” at the company. While malicious emails targeting three of the potential victims were rejected by an email server, at least one of the employee accounts was likely compromised,

I urge you to read the entire thing.

gimcrackery
+15 more
posted on Jun, 5 2017 @ 03:44 PM
link
This is nothing new for the Russians or for America. The only reason it is being talked about now is because it is a scapegoat for Hillary. a reply to: Liquesence

for those who will pull the TLDR excuse, could you explain the end game the Ruskies had here please?
I just want to know what they did, once they had possession of a computer owned by someone from the election software company.
edit on 5-6-2017 by network dude because: (no reason given)

DAVID64
+36 more
posted on Jun, 5 2017 @ 03:52 PM
link
I can't say I trust anything coming out of the NSA lately....well..ever really. Since we found out they have the ability to make it look like other countries have hacked our systems, they've lost credibility when it comes to finger pointing.

posted on Jun, 5 2017 @ 03:52 PM
link
a reply to: Liquesence
So was the DHS hackings related to these alleged Russian espionage attacks?? Were they to counter them?? Maybe this is just the excuse they are looking for to justify why the DHS was hacking the election machines as well???

While it is mostly unknown how successful the attack was or what it exactly accomplished, it seems to indicate that by installing malicious software they could disrupt/alter voter registration roles, removing data (voters), altering voter eligibility, mimic an absentee ballot provider, etc.

The point in all that: disrupt and undermine the US democratic process.

originally posted by: Kali74
If this is true... it's huge.

Correct, and it appears to be true.

Unless the entire report is a leaked NSA fabrication to finger Russian.

provided anonymously to The Intercept and independently authenticated

A U.S. intelligence officer who declined to be identified

They're throwing everything but the kitchen sink at the public in desperate attempts to get anybody to believe them.

originally posted by: Kali74
If this is true... it's huge.

And will get a full chapter in Hillary's new book.

originally posted by: xuenchen
This is rich.

provided anonymously to The Intercept and independently authenticated

A U.S. intelligence officer who declined to be identified

They're throwing everything but the kitchen sink at the public in desperate attempts to get anybody to believe them.

Wow. Thanks for condensing all of that. This is a big freaking deal.

Who gets the blame? Who was president when all this occurred?
edit on 6/5/2017 by carewemust because: (no reason given)

originally posted by: DAVID64
a reply to: gimcrackery


I think this point is important to the narrative. Regardless of their hacking attempts who would it have helped? Looks more like it was in favor of Hillary more than anything considering all the GRU could've done is add or subtract vote totals and as we know Hillary got 3 million-ish more votes than Trump. So other than confirming what we all know, that most major countries can and do medal in other countries elections. What's the point?

I would be disappointed.

No, it's a serious and intolerable attack on the United States just as surely as 9/11 was.
It MUST be exposed and dealt with.We are a sovereign Nation, Russia is proving to be a dangerous enemy.
Naive Americans, most are YOUNG UNINFORMED AMERICANS, have been propagandized into approving of this.
It has NOTHING to do with Hillary! You are just sadly, doing what you are told by forces that do NOT have America's best interests in mind!
AND, save the "we do it to" argument. That's an irrelevant one.