2,000 years between those accomplishments, I don't really think you can compare these. Also, the Baalbek stones may be as much as 3 times as heavy as the Thunder Stone.

posted on Jun, 5 2017 @ 07:47 PM
link
I thought the Baalbek Temple Foundation Stones predated the Romans who came much later & dedicated the Temple to a God in the Roman Pantheon

next... I always questioned if the extremely large foundation stones actually came from the nearby quarry at all...
there might have been another huge chunk of limestone situated at the Temple and the 'foundation blocks' were just dressed to appear as they came from the other outcropping of rock that served as a Quarry
(there should be excavation to the bedrock to verify where the huge Foundation Stones were actually from)

About that 30 degree angle of the still present 4 rectangular blocks in the Quarry...
If the whole areas' tectonic plate shifted to be at the present 30 degree rise, then the Temple Platform itself, only 6 miles distant should also be tilted by some degree... which it is not !
deduction = the unfinished mega blocks still sitting in the Quarry were chiseled away After the smaller Temple Stones were fashioned then carted off to finish the Temple's flat floor area - upon which columns or walls might be built later on by the Romans...

posted on Jun, 5 2017 @ 08:19 PM
link
Baalbek is amazing. I've always wished I could have been there to see how they cut and moved such giant stones. Stones which would take the heaviest of modern machinery. So much knowledge was lost since ancient times. I'm on the fence as far as the ancient astronaut theories but I sure would love to know how they built such massive structures with hand tools. Especially Petra & Gobekli Tepe.


originally posted by: MerkabaMeditation
a reply to: Harte

Thanks for sharing, but The Thunder Stone was moved in 1770's when they had materials, technology like ball bearings, and the math to pull this off - I don't think you can compare that great accomplishment with what would have been possible to pull off 2,000 years earlier at Baalbek. Also, the Baalbek cut stones may be as much as 3 times heavier than the Thunder Stone. 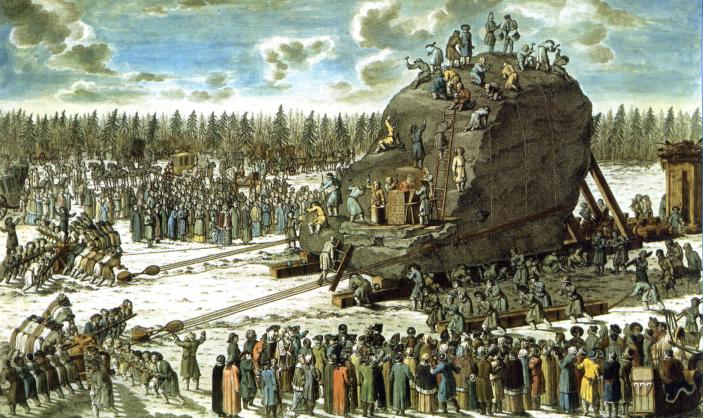 
good job completely ignoring the part of his post where he explains that the Romans often moved stones of comparable size. I mean, why acknowledge something that doesn't fit your uninformed ore-conceived opinion, right?
Learn some history. Research ancient romantic construction techniques. inform yourself instead of latching onto silly theories.

Caesar: "Caesar is all things, to all men."

Maybe the 30 deg angle has something to do with it being placed or cut down or something. That angle rather than being flat would allow for the weight of itself to move or slide or something once the final cut is made and it's free from what is holding it.

I'm just guessing of course. But something is just weird about such big stones. It makes no sense that anyone would be able to use such large stones even if they could create them.

Any theory that anyone comes up with still doesn't ever explain it all. If they were advanced enough to even use such large blocks then you'd think they'd be advanced enough that we'd find other things too. Equipment or machines they used or something. Also, if they were that advanced why no evidence of steel or anything. None of it makes sense yet there it is. Some big ass stone blocks that nobody can even figure out how to move today let alone way back then. Now, possibly a whole structure of them already stacked and part of a massive complex. It kills me not knowing WTF is going on with these things.

originally posted by: MerkabaMeditation
You've probably already heard of the mysterious 1,000 ton Baalbek stone in the (so-called) quarry. However, recent archeology digs at the site have revealed that the 1,000 tone stone is just the top of the iceberg - beneath it are even larger stones, perhaps even as heavy as 3,000 tons in my estimation based on these recent pictures.

So much for it being a quarry - it seems that beneath Baalbek there is burried something unimaginable HUGE, perhaps an ancient megalithic wall or a building of some kind. We're living in exciting times. 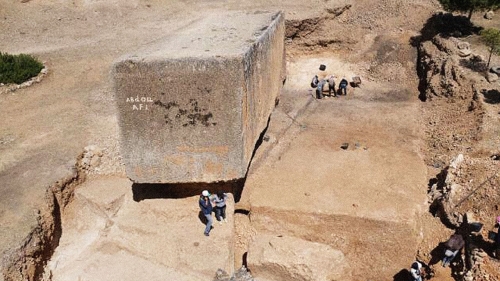 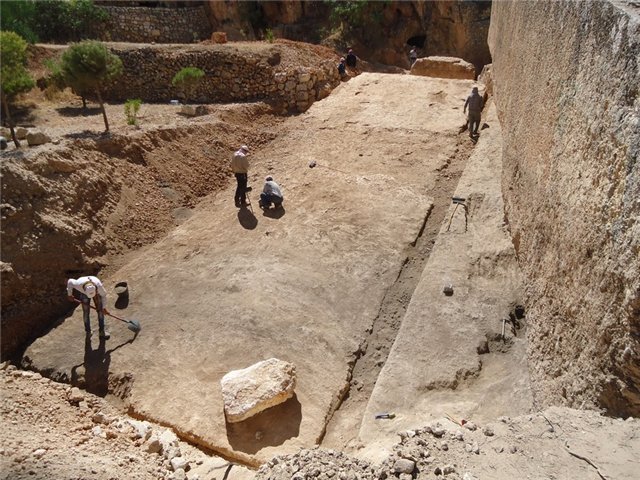 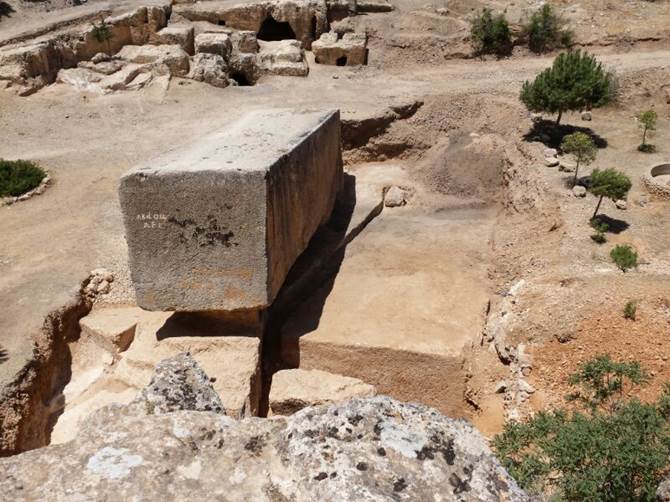 Edit:
The only reason that mainstream archeology still calls this a "quarry" is because they have no explanation how the ancient people could move such huge blocks back then, and therefore they must call it a quarry as calling it something else would invalidate their current theories of how human civilization has evolved from ancient times. By calling it something other than a quarry, they would at the same time admit their current theories are wrong. IMO, this is the smoking gun, ladies and gentlemen...

Also, notice that we see four megalithic cut stones, all at a 30 degree angle, while the rest of Baalbek from Roman times has a flat layout. One would imagine that these cut stones also had a flat layout once, but how far back in time are we talking about? Has the tectonic plate that Baalbek is on moved 30 degrees upwars after they were cut, and is this proof that the cut stones is way more ancient than the Roman palace there?


I have no idea how they got the blocks out of there.

Not enough room to put the muscle needed to move the blocks, even if everyone was built like bulgarian weight lifters.

That's 1000+ tons of dead weight to drag uphill. Hope them rollers had brakes on them.

The "Thunderstone," a granites megalith, is the heaviest stone ever moved by human beings. It weighs 1500 tonnes (one tonne equals about 1.1 ton, I just decided to find out.)

The use of the 'tonne' unit removes the ambiguity of the 'ton' in a measurement (no need to consider nationality to interpret the actual mass involved).

It will maybe require a time machine to work out how stones of that size were actually moved and placed in position - we have much to re-learn it seems. What I see is evidence of humans just as smart as we are today, perhaps even moreso when it comes to innovation and problem solving ability.

whats left of tower of babel maybe, not sure if thats the right area.

Thank you for illuminating those who think aliens or giants or what not moved stones in old times...laughs

originally posted by: humanoidlord
old news, we know of the huge buried stones since,at least just a bit after the discovery of the big one

I had never heard of these stones, so i am glad they posted a thread about it!

I have never seen such stones been quarried on top of each other. Perhaps this is not a quarry, but something totally different, which got covered by sand and other rubble, forgotten, discovered and turned into a supply for big stones for the Jupiter Temple and other sites - and a sort of quarry for the later folks.
The origins and original structures can only be speculated. The stones beneath just simply dwarf even the largest one.

exactly.... is this site on a tectonic plate?......where the ground cracks open?. if thats the case, maybe the ancients knew this and tried to carve these things to try and stop their world from ending..... to appease their God. or whatever, if we cant move them and it wasn't aliens, then for me they have done it for a reason, and maybe they though these things are like giant joists or something that joins the the two plates together......

Where was the tower of babel supposed to have been? Maybe this is part of it?

posted on Jun, 6 2017 @ 06:06 AM
link
a reply to: MerkabaMeditation
It is always possible that the stones underneath began processing before the topmost stones had been fully moved, due to time constraints or some such. It is also possible that the workers revolted at such an impossible task, as at Rapa Nui (Easter Island): 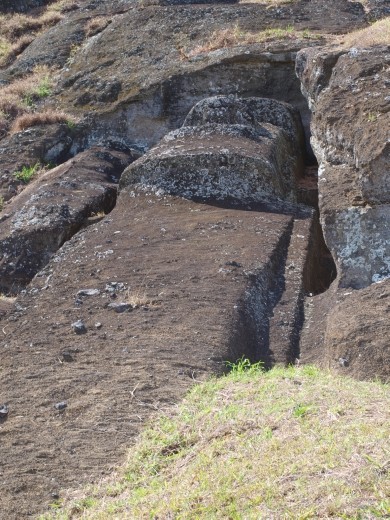 a reply to: Harte
Your insight is always greatly appreciated!

a reply to: norhoc
Etemenanki is over 1000km away in Iraq, Baalbek is in Lebanon.

originally posted by: MerkabaMeditation
a reply to: Harte

Thanks for sharing, but The Thunder Stone was moved in 1770's when they had materials, technology like ball bearings, and the math to pull this off - I don't think you can compare that great accomplishment with what would have been possible to pull off 2,000 years earlier at Baalbek. Also, the Baalbek cut stones may be as much as 3 times heavier than the Thunder Stone.

I suggest you try reading "Vitruvius : On Architecture". There are various free copies available online (Lacus Curtius do good ancient reading translations). I think that you may be suprised after reading by exactly what the Romans could accomplish. It is also worth remembering that the Romans were quite open about pilfering their knowledge from everywhere and everyone that they conquered.

originally posted by: MerkabaMeditation
a reply to: Harte

Thanks for sharing, but The Thunder Stone was moved in 1770's when they had materials, technology like ball bearings, and the math to pull this off - I don't think you can compare that great accomplishment with what would have been possible to pull off 2,000 years earlier at Baalbek.

The ball bearing was invented about 25 years after the Thunderstone was already in place.
The guy in charge of moving the stone invented a type of metal roller similar to a ball bearing to aid in the movement.

Do you believe the Romans could not have moved these stones?
I already told you that the calculations have been made for capstan winches (which they used all the time and some remain today) and they show that capstans can easily provide enough force to move them by dragging on sledges.

The platform of the Jupiter temple surrounds and encompasses another platform - evidence shows that the older platform was also built by Herod.
We know who Herod was, when he lived, and where.
We also know who continued his architectural style (today called "Herodian") and when.
There's no room here for your mysterious "Ancients" that moved these stones by (apparently) magic.

originally posted by: MerkabaMeditation
Also, the Baalbek cut stones may be as much as 3 times heavier than the Thunder Stone.


The Thunderstone is at least twice as massive as any of the three largest stones placed in the platform of the Jupiter Temple.

Please provide a citation indicating that any of these unmoved stones are six times the size of the three trilithon stones.

originally posted by: Sublimecraft
a reply to: Harte


Yeah, but most stone doesn't float.