I wanted to create a thread for discussion on our journey through the new Twin Peaks series. I have a feeling it won't exactly see much activity, but if there is an audience I'd like to make this the official ATS discussion thread for this show.

I'd like to discuss theories, interpretations, meanings, and personal experiences with the show. I think it could be fun!

Twin Peaks to me has always meant the most fundamental of universal truths. This isn't the show about who killed Laura Palmer as it was branded. This is a show about the conflicting duality of human beings--good vs. evil being a war we each must battle.

As a jumping off point to start an ongoing discussion thread (if it's possible to sustain one..)

Was Michael J. Anderson (aka the man from another place character) written out of the show 25+ years ago? It would seem to suggest Lynch had planned on reviving the series at some point to complete a story.

The original run of Twin Peaks, more specifically the finale episode, left viewers with many questions and many clues. One such line that always captured my attention was spoken by the Michael J. Anderson character. 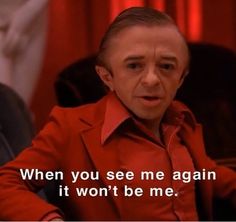 Admittedly, this show is very difficult to interpret literally, or with the supposition that any given line has actual meaning. Part of the fun is deciding what is of consequence, and what can be tossed away as a red herring doled out by Lynch. This line has always stood out to me as did the more famous one spoken by Laura Palmer's character "I'll see you again in 25 years."

And indeed a little over 25 years later we are again in the waiting room of the Black Lodge.

And indeed the character known as "The Arm" or "Man From Another Place" is ... unrecognizable. 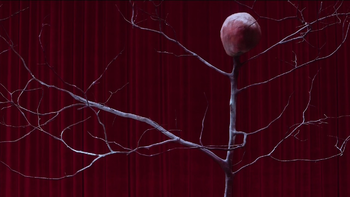 The "evolution of The Arm" indeed!

There are plenty of reasons why Michael J. Anderson refused to make a reprisal for this iconic role. Some include disputes over pay. There have also been indications that Anderson had a falling out with Lynch. And it has also been revealed that Anderson has found the show "boring."

Another line that is just coincidence?

It should be noted that Anderson had a small role in what is perhaps Lynch's most famous film Mulholland Drive.

However, in the case of Twin Peaks, we are seeing his character again, and it is NOT him. Although likely unintentional, Lynch's Twin Peaks is coming full circle in interesting ways.

I have a feeling Michael J. Anderson will eventually make a cameo of some sort.

I can't wait to see what else is around the bend!

Please, I urge any Twin Peaks fans to share their observances or thoughts on this exciting new string of episodes. Perhaps we can find more of those famous "keys" that Lynch leaves for us.

The OST is dreadful. Like the worst I can even recall. Really surprised Lynch settled for it.

Really making it a challenge to keep focused on it.

But as a connoisseur of surreal film, I'll manage.

It's more 'weird' though than proper "Surreal", especially the first season.
edit on 4-6-2017 by IgnoranceIsntBlisss because: (no reason given)

No, I never found it very surreal either. But it does stand out as weird when compared to other prime-time dramas or soaps.

I think the most fascinating thing is that it's many things! It's drama, comedy, romance, mystery, horror, and even a parody at the same time.

If nothing else, it wins for being a unique thing for its time. I have mentioned in another post that I feel Twin Peaks is essentially the thesis for Lynch's body of work in film. Many of his films can find their way back to Twin Peaks as if they exist in the same universe.

I hope you find something positive to take out of your run.

posted on Jun, 5 2017 @ 02:27 AM
link
I've always been fond of referring to it as awkward. I think more than weird or surreal that Lynch was going for awkwardness, creating intentional uneasiness in the most mundane things. No matter how simple something is it can be made "off" with the right kind of acting.

Regarding this current season, I'm over DougieCooper and seriously hope he gets back to normal in episode 6 but I'm doubting it will happen so quickly. And I'm seriously considering switching my avatar here to Dr. Amp, that was great.

I like that they didn't close episode 5 on a band scene and I can't wait for the reveal about what's up with the bands. There's no real reason to think something will be up with them but I've got a feeling there will be. There was a couple quick light strobes this time and that usually means something related to... ah ... lodge weirdness. I want to watch the previous episodes again to see if there were any strobes while the other bands were playing.

Regarding the question in the OP. I don't think he was written out so early on but they weren't expecting the show to get canceled. I think it was forshadowing more body/soul swapping/splitting. Forget the current 'evolution of the arm' bit. Back then he was in the waiting room so if the show had continued then I think his doppleganger would have been in the real world and real Cooper would have eventually ran into him.

But I've been thinking lately, what is reality in Twin Peaks? What if the reason everything is so 'off' is because it's not the right reality?

So many theories. I'm just loving the ride.

Havent gotten to the new TP season to be able to comment. I hope its more like what I'd expect from Lynch, with a fresh high quality feel.

posted on Jun, 5 2017 @ 03:01 AM
link
a reply to: NarcolepticBuddha
Yes, the old show was about the struggle of good and evil.
In fact it was deliberately subverting the convention of good triumphing over evil.
For one thing, the distinction is blurred. The very first episode shows a boy acting in hostility to one sympathetic character, and then acting supportively towards another sympathetic character, so that the audience is confused about how to take him."Good" characters begin revealing a "dark" side.

Furthermore, it becomes obvious that the struggle against evil is getting nowhere. The assistance of the "helpful" characters is futile. Thus when another murder is taking place, the log-lady hustles Agent Cooper to a location where the Giant figure can stand on a stage and intone "It is happening again", and the tall waiter can tell him that he's sorry. Giving him the chance to do something about it would have been more useful. In fact the events in the Red Lodge create the suspicion that the "helpful" characters are futile because they are not really independent of the power directing the forces of evil - in one of the cave drawings, are not the tall figure and the short figure walking hand in hand? A real Conspiracy Theory series.

The plot lines in the old series could never have come to a resolution, because the whole point is the message that good cannot triumph over evil (which is what conventional resolutions are supposed to achieve). The transformation of Agent Cooper expresses that very effectively.
So a new series is almost redundant, because it can't really add anything to the statement made by the old series.

posted on Jun, 5 2017 @ 04:53 AM
link
New shoes. I loved twin peaks when it first came out but not sure when I will get a chance to see the new one. Any thing by David Lynch is magic. Lucky you guys fir being able to watch.

I think it's moving into different territory. A lot of questions are kind of being answered, though, still vaguely.

I don't think I've ever really noticed that theme before--but the 'good' does seem pretty powerless in the Twin Peaks/ Lynchverse.

The 'good' is always just out of reach; sort of an implied, intangible thing.

May I suggest a Charles Bronson flick instead?

too slow for me, and not enough Twin Peaks imho.

an update (spoilers)
Norma and Shelly are still at the RR. Shelly has a daughter with a crap boyfriend.
Dr. Jacoby is living in a camp in the woods doing a podcast in which he sells gold-painted shovels. Jerry Horne and Nadine Hurley are among his watchers.

Hawk, Andy and Lucy are still at the Sheriff's Department. Bobby Briggs is a deputy!

Cole and Rosenfield are still with the FBI.

Coop's return to this world (everyone thinks he's an insurance man named Dougie Jones) is going very poorly. Either he or his doppleganger must die; they both can't be in the world (according to the Black Lodge system).

much less smoking in The Return.

It does appear the Dougie/ Cooper is slowly finding his memory. What's missing? It's the golden pearl! Without that 'pearl' he appears to be on autopilot where his only instincts are shoes and coffee.

It was indeed amazing! I am glad someone posted as such.

It's going to be an agonizing 2 weeks for the next ep. But also, 2 weeks of reflection is probably warranted after this bomb Lynch dropped on us.

*We see the first A-bomb explode, which triggers or unleashes bad things.

*The giant and a friend (Senorita Dido) create a gold orb with Laura Palmer's image (anti-Bob?)

IIRC Major Briggs, in the original series, mentioned UFOs. readers of this site are probably aware that UFO lore suggests that alien (or whatever) interest in Earth peaked after we started exploding nukes.

I suspect that 'Blue Rose' is code for stuff involving this shadow realm.

I have to say, I'm having a hard time keeping up. I wanted to like but its difficult to follow. even rewatched the original and film first.

Same. It was just not coherent for me. And the least episode, wtf?