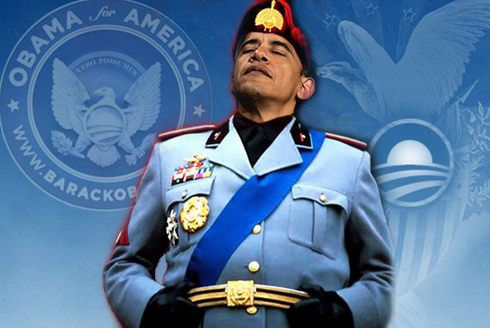 But wait a minute... Where were they for Obama?

Well that was Obama all the way. Perhaps leaps and bounds beyond any POTUS before him even freaking Dubya!

Obamacare was the most fascist legislation I know about. Although the Dem's essentially campaigned on "socialized" "free" healthcare, instead what we got was mandatory corporate health insurance for all (to help a few). It wasn't even good enough for it to just make everyone get it, it even restricts what insurance you can even get to really drive home the cronyism point. Right?

Back when that was going on I recall being perplexed at how while Obama was paying daily lip service that healthcare cant be "for profit", at the same time he privatized NASA. And then Obamacare came out total fascist corporate cronyism anyways.

What does Antifa say about Obamacare? 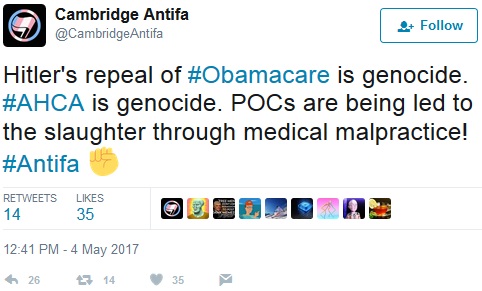 That's some real irony there! Especially since Antifa in their street 'Brownshirt" (er Blackshirt) goosestepping goon squads tactics live more up to the 'brutalitarian' "fascist" stereotype than even the skin heads.

And you know what, while we're on the subject, the DNC made it their agenda to ram Obamacare down everyones throats with racial demagoguery as one would expect following the sorts of rationale I've heard people like BAMN assert that 'fascists are racial demagogues' (paraphrasing). I seem to recall "if you're against Obamacare then you're a racist".

How is all this supposed to make a lick of sense?
edit on 4-6-2017 by IgnoranceIsntBlisss because: (no reason given)

Don't blame Democrats. Democrats wanted a single payer healthcare system. ACA was the compromised demanded by the Republicans. If anything, blame the Democrats for allowing the ridiculous 70 vote rule in the Senate to have any weight.

Are you one of the ardent believers?

"They get things done"

If it wasn't even what the Democrat's wanted, then why would they go to such unprecedented extremes of racial demagoguery to ram it down everyone's throats?

If they aren't just a fascist as the Republican's ever were, then why didn't the DNC brand the RNC version of it for what it was (Fascism)??

My impression has been that they're a group of militant communistic SJW's who curiously exploded across the scene essentially the moment Hillary lost the election.


Quite a coincidence, isn't it?

Ironically they claim to be "anarchists" while marching to the beat of left-wing politics. You'll never see these "anarchists" protesting against globalist puppets because their handlers won't let them.

The truth is ANTIFA is nothing but butt-hurt Democrats and dumb impressionable kids trying to fit in at liberal universities. 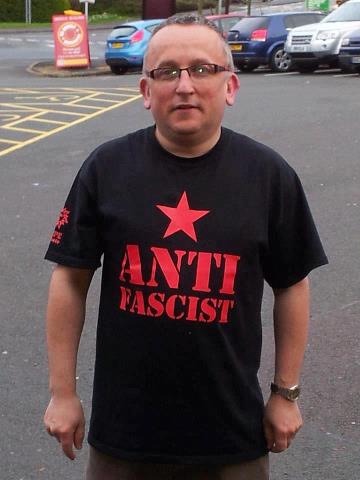 The DNC didn't have to "shove Obamacare" down the public's throats. In fact, they did a pretty piss poor job of PR on the PPACA all the way around. There's an argument to be made that given that a majority of insured people have insurance through their employers and that POC have gotten shafted on employment, that subsidization of insurance for the poor disproportionately affects POC.

I don't want to get into defending Obamacare. It's obviously got problems. I don't for a second believe that Obama's push for healthcare reform had anything to do with an agenda of enriching insurance carriers. I do think that rather than subsidizing private insurers, there should have been a public option. In fact, I still believe that. I also fault Obama for killing it though everyone who isn't ignorant or stupid can probably guess exactly why he did. If the GOP leadership hadn't convened on inauguration night and laid out a plan of blanket obstructionism, then perhaps the insurance lobby wouldn't have held the sway they had.

That said, there's some serious cognitive dissonace here. On the one hand, the "OMG LET'S KILL OBAMACARE!" crowd wants to tout subsidization as "crony capitalism" as you are and on the other, point to all those insurance carriers who are pulling out of markets because there's not enough profit to be made.

As for the "restrictions" bit — have you just decided that everything you don't like is "fascism?" I mean, that's nothing new. In common usage it hardly has any meaning as it is but even then, you stretch it way past the point of breaking. The restrictions you're talking about are minimum requirements for plan coverage.

So Obamacare isn't crony capitalism, is what you're saying?

Is there not any truth to this:


Benito Obama’s Fascist Transformation Of America
The so-called regulatory agencies of government are typically staffed at the top by crony capitalists and lobbyists for the industries they supposedly regulate. As such, they write rules and regulations that benefit preferred large multinational corporations and government at the expense of the people. I have documented this so many times here that it is now self-evident to all but the most sycophantic worshipers of government. However, given its relevance considering the passage last Thursday of misnamed “net neutrality” regulations by the FCC, I give you for evidence the agency’s chairman, Tom Wheeler, former president of the National Cable and Telecommunications Association and CEO of the Cellular Telecommunications & Internet Association, which are lobbying organizations for the cable and telecommunications industries. He was also an executive for a venture capital firm that invested in technology firms.

As Benito Mussolini stated, “Fascism should more appropriately be called Corporatism because it is a merger of state and corporate power” and “The definition of fascism is the marriage of corporation and state.” That exactly explains what our former constitutional republic has become. It is benevolent totalitarianism, tyranny under the guise of democracy. But the truth is democracy = socialism = fascism = communism. They are one in the same.

Mussolini also said of his fascism, “We have buried the putrid corpse of liberty,” and that is likewise the goal of the American fascist politician and federal bureaucrat. Liberty necessarily perishes under collectivism, egalitarianism and government altruism.

Obama is a raging facist.

posted on Jun, 4 2017 @ 11:07 PM
link
So yet again we have another thread where people completely ignore the history of the word 'fascism' or what it has always meant.

Why dont you break it down for us ignorant ones.

originally posted by: okrian
So yet again we have another thread where people completely ignore the history of the word 'fascism' or what it has always meant.


You should tell Antifa what facism is.
Maybe give them some books.

posted on Jun, 4 2017 @ 11:19 PM
link
Interesting thing I just found while reviewing your definition of fascism... compare Googles definition to the other three below it... 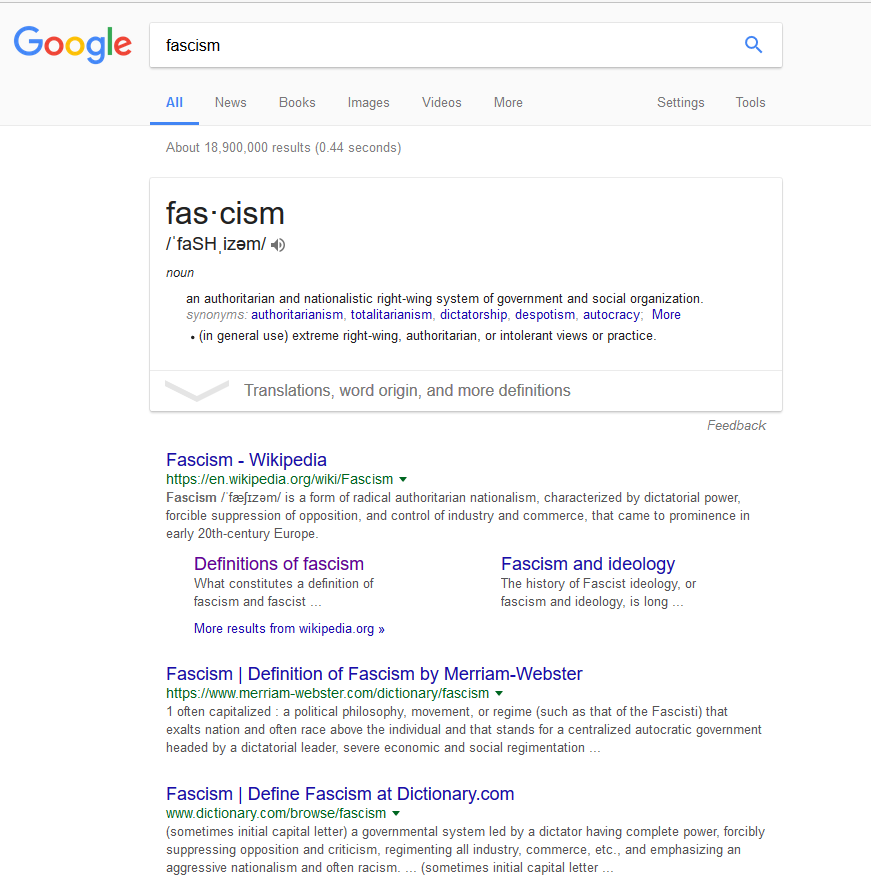 An as Huey Long once said

When fascism comes to America it will be called anti-fascism

In current times I interpret the political atmosphere in respect to fascism to this:

The 'Conservative/libertarian' aligned majority of America want to separate business from government, reduce taxes, regulations, and influence. Seek to retain their rights, specifically free speech, and are open to having a discussion.

The 'progressive/liberal' aligned have more of a government controls business by increasing regulation, taxes, and influencing their decisions based on political favors. Seek to oppress people with differing ideals than their own.
Reurters: Obama opens White House doors to forge CEO alliances

I do note that this is a slight generalization, there will be outliers to both sides. Based on majority of the population the above interpretations would be the most fitting.

At the end of the day, 'classical fascism' does not really apply to us. Our political atmosphere is far more complex than it was during the time of Benito Mussolini. My taking of the current political atmosphere is more of the Merriam-Webster definition. If we look at the Antifa gatherings and the SJW outbreak, simple observation will show that they fit the sociological aspect of that definition. Both Antifa and SJW are 'progressive/liberal' aligned and that political outlook seeks to hamper business and the economy with controlling regulations, taxes, and manipulations.
I think that the 'Obama Fascism' and the 'Antifa/SJW' fascism are two parts as to a means to an end. The populous can't effectively control the economy with ease, we are far to diverse in ideals relating to the correct handling of economic policies. The government is far more consolidated and more effective to handle that aspect of fascism. The Antifa/SJW aspect covers the sociological aspect. Judgement by our peers is one of the strongest factors within our societal system to drive adaptations, and when one side reverts to extreme measures to get their point across (Riots, violence, and oppression) it begins to take more notice and impressionable people are more easily convinced by those tactics. The government would face severe opposition and criticism if they were take on the societal aspect of fascism.

When both sides meet the middle will be the fruition of a decades long operation to overthrow the United State of America. This has been in the works for a long time, and it was making progress in little spurts (1960s-1990s), until recently. The rapid growth of the 'fascist' movement is very concerning. Look a decade into the past and look at how far the societal atmosphere has changed.

Lucky Trump threw a monkey wrench into the progression, which is why the sociological forces have been acting up with more ferocity, they need to regain the ground lost with the 'republican' take over of the government (economic control.)
edit on 6 4 2017 by Sabz228 because: derp

Those clowns at antifa don't even realize they participate in fascist behaviour. (Suppression of free speech) I am a firm believer in the US constitution and Bill of Rights. I may not agree with anything they have to say but I firmly support their right to say it, even if it does expose them as the mother of hypocrisy. Ohh and yeah ditto on the butt-hurt democrats that just couldn't handle that evil troll losing in an election she tried to rig. They are a passing nuisance nothing more.

I was mostly keeping this framed within economics policy. There's of course other metrics like government centralization, concentration of power, despotism, and so many other specific sorts dealing with military and police state BS. Pretty much all of which Communism shares with Fascism. All of which Obama was just as much about as Bush or Trump or take your pick every could be (in practice, just not necessarily as much so in lip service).