By now we all pretty much know about the London Terror attacks but...

posted on Jun, 4 2017 @ 02:06 PM
link
Something I was reading earlier today struck my interest. It was part of Prime Minister Theresa May's reponse to the most recent attack on London Bridge. In this article she says:


"We cannot and must not pretend that things can continue as they are," May said, calling for a beefed-up counter-terrorism strategy that could include longer jail sentences for some offenses and agreements to regulate cyberspace.

Does this strike anyone as particularly China'esque? I cant help but to wonder if regulate = censor in this instance.

Personally, I know if I lived in the UK I would be a bit worried about the potential for abuse here in this regard. Couple that with the US's movement away from net neutrality and something stinks.

All of this stinks. 2 terror attacks in as many weeks just before an election. Campaigning is being postponed again but the election will take place as planned.

British people are walking around in the dark wondering wtf is happening.

Not sure what she's talking about here. I saw a report on CNN to the effect that the Islamist terror groups like ISIS and Al Queda communicate through a service based in Germany called "Telegraph" which is apparently beyond international regulation. I'd have thought they would be using the dark web. I rather doubt she's talking about social media, FB or Twitter and the like..........I don't think they communicate with those, although I could be wrong.

Guess we'll have to wait and see. 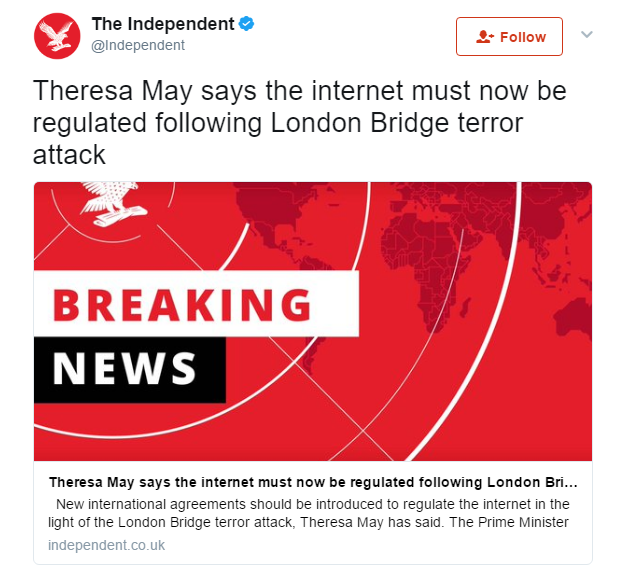 I think shes talking about more powers to snoop on our online activity and fear she may be considering a national firewall system as seen in Australia ... and China.

originally posted by: Wide-Eyes
a reply to: alphabetaone

All of this stinks. 2 terror attacks in as many weeks just before an election. Campaigning is being postponed again but the election will take place as planned.

British people are walking around in the dark wondering wtf is happening.


Right. Coincidence somehow just doesn't seem appropriate. I am waiting to see too what happens, but I'm definitely keeping this one in the forefront of my mind as that wording really struck a chord with me.

originally posted by: Sublimecraft
I posted this a little earlier in a thread.......

Sorry bout that, had I seen it I likely wouldn't have bothered starting a thread about it....but I do think it's worthy of a thread none the less. That and I want to remember to watch how it all progresses from time to time and having a thread about it helps me in that regard.
edit on 4-6-2017 by alphabetaone because: (no reason given)

As someone who is in the U.K. and pays attention to the politics, at a time when the Tories are desperate they need their best weapon to use... fear. And I do find it convenient that these attacks are happening at this moment in time. The reasoning behind Snooper's Charter was a lie, as I fear this latest tirade against the web also is.

Are there really still people that don´t get it?
That the whole terror stuff since exactly 9/11 is created, funded by "us", the western secret services. Or at least they let them happen, right under their eyes.

Just to install Big Brother, just to have excuses to exist!
Man, they even use they same script everytime, so...

...are there really people left that don´t get it?

Best evidence is May´s "observe all citizens in the web a bit more" reaction.
Some lunatics injured and killed people, with cars ans knives, first reaction:

Observe all of the average citizen in the web more...

If a plane falls from the sky, do we start to observe the seas because of that?

No, it`s so clear, after every terror attack in the west(those with way more victims and in areas where they happen every month for several times don´t count, as it seems, if it is not the west), done by attackers that all were known and often under actual observation of the "anti-terror" officials, the first reaction of the "defenders of our western, liberal lifestyle and freedom" force us people to give away exactly those freedoms, bit by bit.

So that the rich and only because of that powerful, the ruling class, build a secure state... for themselves. And the average people are the potential terrorists, that need to be observed 24/7, by the "anti-terror" agencies, as we can see live and since years. Telling the people all that would be for their security. Yeah, it´s logical that they spy on me, for my security...

And those that spy more on their people, that cut more of their peoples freedom, are coincidentally hit more often by terror attacks, whoever is the real puppet master.
Look at England, look at France

It´s like "they" know exactly that it is one minute before twelve(people in the west, maybe except scandinavia, are fed to the backteeth of these robber baron capitalism systems, of the dictatorship of the rich), and want to create as much security for themselves as possible, in the remaining time. Before the next self made(by "them", because of greed and gambling obsession) stock market crash, or whatever it will be that will let the people uprise, in the near future. I mean, everybody can feel it, there is something in the air...

That whole terror stuff since 9/11 is a tool by the rulers, to get complete control of the annyoing "working bees", that only are allowed to exist to work, consume, pay taxes and sleep, sleep, sleep...

But i am still wondering that there are really people left that can´t see, accept the reality, that we are all fooled, all average citizens in the west!

Evidence?
Reactions of "our protectors"(destroying that what they should protect, doing the work for the terrorists!), after every suspsicious terror attack!

originally posted by: gortex
a reply to: TonyS

This could be more accurate than we know.

At first, myself living in the US, I thought the move away from net neutrality was simply yet another stupid move the US was making in a series of decades of stupidity...however, it's starting to shape up globally as an existential threat to our freedoms - or so it is starting to seem - where once we used to castigate countries like China and NK for their censorship policies, I'm wondering if we're (the US and UK) adopting them.

Maybe a national fire wall system that blocks the dark web might not be such a bad idea?

posted on Jun, 4 2017 @ 02:42 PM
link
It wouldn't surprise me if we are only about 2 major terrorist attacks away from completely losing the internet as we know it.

Maybe one day it'll dawn on people that trading freedom for temporary security is a scam.

Isn't net neutrality about money, i.e., bundling for more bandwidth? Not, censorship but profiteering by ATT and Comcast.

originally posted by: gortex
a reply to: TonyS

I think shes talking about more powers to snoop on our online activity and fear she may be considering a national firewall system as seen in Australia ... and China.


www.abovetopsecret.com...
There is already a firewall to block extreme hard-core porn from outside the UK. Now they want to ban "extremist" websites. That would in theory include all the jihadist websites with videos of killing people, attacks, glorification of Jihad.That could easily be covered by legislation banning access to "terrorist materials" and "cut off the oxygen of publicity" as they did with the IRA. But they don't mention "Islamic Extremism", they just mention "Extremism" to be politically correct. The Saudi's wouldn't be too happy if they weren't allowed to export their versions of Islam. All those hundreds of thousands of defence jobs depend on those contracts.

So one can guess that "Extremism" is going to cover the "alt-right" and other right wing groups. An example would be made of in order to show that the authorities weren't being racist against one particular religion. They would probably go after the political debate websites.

originally posted by: TonyS
a reply to: gortex

Maybe a national fire wall system that blocks the dark web might not be such a bad idea?

I learned that all murderers, dictators, all evil people in the mankinds history, inhalated oxygen before they did evil things.
Wouldn´t it be about time to forbid oxygen?

And you would have a lot to block, knowing that the "open web" we are actually using, is just the little tip of the interwebs iceberg.

And the secret services wouldn´t close their playground anyway, only for the average population maybe!

originally posted by: Wide-Eyes
British people are walking around in the dark wondering wtf is happening.

posted on Jun, 4 2017 @ 02:52 PM
link
Was just a matter of time(and or matter of intent letting a lot of these sickos run free when they were known about) for more net restrictions-UK is pretty anti privacy as it is. To say similar to the Patriot Act in the US, more NSA alphabet agency activity post 9/11. UK citizens need to stand up before it's too late.


Round up these scumbags and all like them that preach their Muslim hate, and close down the Mosques they preach out of.

But no! Going after EVERYONE'S freedoms is nothing but the elites implementing their Hegelian Dialectic.

This isn't rocket science, its just those in authority do not want to fix anything, they just want to use the chaos to further implement their agenda.

posted on Jun, 4 2017 @ 02:54 PM
link
Comes as no surprise that these vehicles attacks are happening in tandem with the emergence of mainstream autonomous driving technologies.

Before the last couple years, I hadn't heard of terror attacks carried out by driving a vehicle through a crowd of people.

Seems like the beginning of a series that will be used to justify mandating autonomous vehicles upon the populace.