page: 1
36
<<   2  3  4 >>
log in
join
share:
seasonal
+15 more
posted on Jun, 3 2017 @ 06:20 PM
link
None of the students interviewed could think of a time when conservatives rioted against liberals speakers coming to campus. Some of the students found it funny that liberals claim to be tolerant but are not. I have found this to be true as well. Their way or the highway.


This is also the reason I think that liberals riot and conservative have revolutions.

In other words if a bunch of conservatives are demonstrating it would not be a car turned over burning or a store front getting smashed. It would be a concerted effort to correct something-organized, deliberate and effective.
edit on 3-6-2017 by seasonal because: (no reason given)

Liberals feed on emotion and temper tantrums while Conservatives feed on logic and pragmatism.

There is no point in emotional outbursts to most Conservatives.

I agree, one of the few times I see conservatives act like libs are with the MJ debate. The wheel comes off the rim with the MJ.

If you're just looking for a reason to talk smack and get some affirmation from your peer group, then why not post in the Mud Pit where people can respond accordingly?

Here's something that happened at a college this week that I haven't seen you concern yourself with:

Collins was waiting with two other students for an Uber ride outside the Montgomery Hall dormitory on Regents Drive near U.S. 1 at about 3 a.m. Saturday when he was attacked.

The stabbing was captured by a surveillance camera, police said. They called it unprovoked.

Witnesses said the suspect was intoxicated and incoherent at the time of the attack, police said. Police have said the victim and suspect did not know each other.

Police said initially there was no indication that race played a role. But University Police Chief David Mitchell said information about the Facebook group was brought to their attention on Sunday.

"When I look at the information that's contained on that website, suffice it to say that it's despicable, it shows extreme bias against women, Latinos, persons of Jewish faith and especially African-Americans," Mitchell said.

What the hell are you confused about? Your OP was geared towards outbursts from the Left.

You off your Meds today?

originally posted by: Metallicus
a reply to: seasonal

Liberals feed on emotion and temper tantrums while Conservatives feed on logic and pragmatism.

There is no point in emotional outbursts to most Conservatives.


Logic and pragmatism? How about denial and cognitive dissonance? You want to see some "emotional outbursts?" Get Kathy Griffin to do a mock decapitation photo featuring Dear Leader. Imagine if she'd done a whole video? Fox News hosts would be on air calling for her murder, as they did for Snoop Dogg, and Trump cultists would be falling over dead in their chairs from the intensity of their outrage.

No emotional outbursts my ass.

posted on Jun, 3 2017 @ 06:42 PM
link
No big surprise that the conservatives didn't think that the left (populace) would be intolerant of intolerance. I actually think you all thought we would just go along with this insanity. Nope. I will keep on being intolerant of old-world intolerance.

At least the right can rest happy that there really is no actual left politically in the USA. Even the left here in the US is center-right at best. And much further to the right than the actual population.

And lastly, welcome to yet another cherrypicked video where some right-leaning person (the film maker, OP) attempts to paint the left with a broad brush based on a youtube video. It's a regular occurrence here these days. You realize that this type of hyping is just that right?... hype. There are tons of videos of hicks spouting bigoted nonsense (and certainly not demonstrating in this rose-colored glasses scenario you've imagined) who hail as conservative... but what good does it do to post stuff like that except to divide?

Nice try. Where are the riots? That is some weak sauce.

Do you want this posted in the pit?

Take a breath, I tend to ask clarifying questions. I will not change the method to my madness.

Where are the riots from the conservatives when a lib goes to colleges to speak?

Nice try. Where are the riots? That is some weak sauce.

Do you want this posted in the pit?


I think his point was that you are more outraged at riots than murders.

Where on earth do you get that?

Of course murders are much worse than a riot.

posted on Jun, 3 2017 @ 06:47 PM
link
Apparently the intolerant conservatives are all drinking beers at the beach.

And yelling at muslim families.

Oops, still not a riot.


Thanks for playing though.

I meet your deflection with me meme: 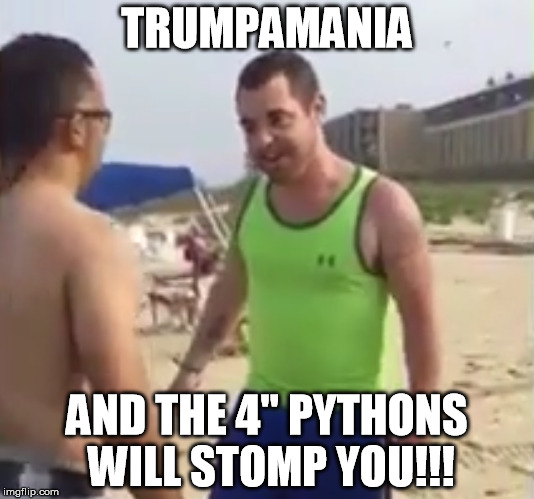 In case you dont get the WWF references, I' ripping on that dooosh.
edit on 3-6-2017 by IgnoranceIsntBlisss because: (no reason given)

originally posted by: seasonal
a reply to: Deaf Alien

Where on earth do you get that?

Of course murders are much worse than a riot.


Because you don't show concern about conservatives murdering people.

OK I'll play a bit, where in this thread is there any talk about conserves ( I am not a conserve) murdering people?