posted on Jun, 3 2017 @ 05:35 PM
link
PhD student, Lee White of the University of Portsmouth leads research regarding a new way to improve how we measure the age of planetary evolution in our solar system


Lee said: "Because of the challenges scientists face in dating these complex materials, many meteorites could be older than previously thought. This could affect what we think regarding the age of the major planetary events in our solar system...The ability to generate targeted, high-precision ages with atom probe tomography (APT) shows great promise when examining tiny baddeleyite grains in meteorites. As we are able to identify and sample at the nanoscale, it opens up new avenues for dating highly deformed materials and provides an exceptional opportunity to accurately measure timings of major solar system events." 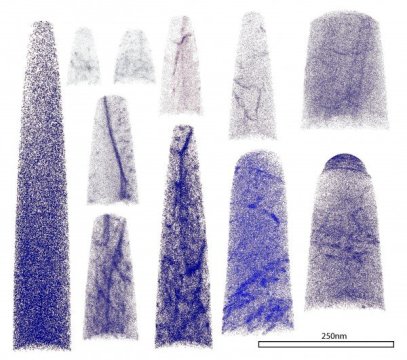 
The study, published in Nature Communications, uses a new atomic-scale imaging approach to locate and count individual atoms in planetary materials. Directly linking the structure and chemistry of minerals in this way opens up new opportunities to understand the spectacular complexity of planetary samples.

Meteorites provide samples that can be used to measure the timing of major planetary events, including lunar magma ocean crystalisation, Martian volcanism and asteroid bombardment of the inner solar system. However, due to shock metamorphism -- extreme deformation and heating that occurs during impact events -- samples often give a mixed age between the formation of the rock and timing of shock metamorphism. This makes it difficult to build an accurate timescale of when planetary events occurred.

Using atom probe tomography (APT), the researchers were able to accurately date such events in baddeleyite (ZrO2), a relatively common but small uranium bearing mineral in planetary igneous rocks. Atom probe tomography provides 3D atom-by-atom imaging of materials with a uniquely powerful combination of spatial and chemical resolution. It takes tiny grains of the mineral, approximately 1,000th the width of a human hair, and energises atoms one at a time using a laser. This allows researchers to reconstruct 3D atom scale models of the material, and visualise the extent of deformation. Counting individual uranium and lead atoms within these domains enables accurate radiometric dating of the associated planetary events. The samples were taken from a 1.85 billion year old impact structure at Sudbury, approximately 400 km north of Toronto, Canada.

This is such an awesome find! I can't wait until we can manage to put this on a prob and have rovers sampling with this technology. We'll be able to learn more about our Solar System than we could have ever in the past.

If you'd like to view the actual scientific journal entry, head to this link

Simply a new way to guess the age of something

Nobody knows how constant decay rates have been, we can only assume they have been constant so it's all a big fat guess

originally posted by: Raggedyman
8 flags and no comments
Seems nobody understands it

Simply a new way to guess the age of something


Perhaps you could explain why you believe this?

Simply dismissing it at face-value seems like an incredibly dangerous way to determine reality. Unless, of course, you've read and understood the journal entry and have some knowledge regarding it that disproves its validity?

U-Pd dating itself is one of our oldest and most understood radiometric dating methods, with routine precisions in the 0.1–1 percent range. Just to clarify that's a 99-99.9% accuracy.

This accuracy is known through radioactivity, a phenomenon with the foundation of the fundamental laws of physics and follows simple mathematical formulas.

We have several hundred laboratories around the world are active in radiometric dating. All of which are continuously providing consistent results using the same, and different samples. If it were a matter of 'random guessing' then we would expect the findings to be ever varying, not following any patterns, unpredictable, and certainly mathematically and statistically impossible to what we do see, which is consistency.

As for a matter of consistent decay rates, Radioactive decay rates have been measured for over sixty years now for many of the decay clocks without any observed changes. And it has been close to a hundred years since the uranium-238 decay rate was first determined.

For instance, that light coming to earth from distant stars (which in some cases emanated billions of years ago) reflects the same patterns of atomic spectra, based in the laws of quantum mechanics, that we see today. What's more, in observed supernova events that we observe in telescopes today, most of which occurred many millions of years ago, the patterns of light and radiation are completely consistent with the half-lives of radioactive isotopes that we measure today.

If you'd like to learn more, you can read more here

So how old is the earth? No need to be exact, ballpark it for us.

So how old is the earth? No need to be exact, ballpark it for us.

Ballpark, roughly, it was here before me

What a ludicrous question, should I base it on stupid decay rate theory or would the bible be a better option

I don't care the age of the earth, I just think the decay rate theory is a faith, no evidence
Why are you steering it away from the science faith?

posted on Jun, 5 2017 @ 03:41 AM
link
Decay is constant while flying through space, but Einstein was a genius jew for inventing Relativity aka time dilation, ok got it. When men lived 900 years (rip neandergramps), the white hole sun earth spirals around was not nearly as close to the galactic core as it is now. What a coincidence and #.

While in the vitreous half of the space cycle, nothing is constant or smooth.

originally posted by: Raggedyman
Ballpark, roughly, it was here before me

What a cop out.

Watch. I think the earth is roughly 4.4 billion years old. Your turn.


originally posted by: Raggedyman
Ballpark, roughly, it was here before me

What a cop out.

Watch. I think the earth is roughly 4.4 billion years old. Your turn.

You know the answer: 6,000 years old. Raggedyman is a Young Earth Creationist so OF COURSE he refuses to accept any scientific evidence regarding the age of the Earth.

No. I refuse to believe that anyone actually thinks the earth is 6,000 old because some metaphorical Bronze Age story was taken out of context.

Can you show me scientific evidence it's 4.4 million years old, cop out

Can you show me scientific evidence it's 4.4 million years old, cop out

And there it is.

We all know that you'll dismiss ANY evidence out of hand if it contradicts with your literal interpretation of Bronze Age creation myths.
edit on 5-6-2017 by GetHyped because: (no reason given)

originally posted by: Raggedyman
Can you show me scientific evidence it's 4.4 million years old, cop out

There is no scientific evidence that you can provide to the hopelessly religiously indoctrinated. We both know this.

It's absolutely pointless providing you with any evidence. Many people have provided you with scientific evidence on this very topic numerous times in the Origins & Creationism forums. Every time, without fail, you hand wave it away and keep your head buried in the grounds of willful ignorance.

I personally am not going to waste any more time providing you with sources because you never read them and just dismiss them out of hand because they contradict your absurd extreme religious beliefs.
edit on 5-6-2017 by GetHyped because: (no reason given)

originally posted by: Raggedyman
a reply to: Ghost147


I already showed you how we know it's constant in the post you're responding to. In case you missed it, here is a more embellished explanation:

When a star goes supernova, it expands and release a tremendous amount of energy and all of its mass.

When this occurs it becomes brighter, and we're able to measure different types of matter and radiation here on earth.

In order for us to actually see this, the light needs to be able to reach earth in the first place.

But that distance isn't necessarily calculated using light as a constant.

We can actually measure distances in space through other means, such as using specific objects of known magnitude, and then evaluating surrounding objects, or the object in question to find resulting size and distance.

That's all done without requiring light as the primary scale of distance.

We can therefore conclude that light was always a constant within the universe and therefore suppliment our calculations by using light as an additional tool for measurement.

We can also confirm light was a constant through other means too, and I can explain if you wish, but let's get back to the radioactivity.

Now that we know the distance of an object in space both through objects of known magnitude, and confirmed through the consistency of light (but again, not necessary), we can determine that the age of the radioactivity is also constant by measuring the emmisions from those supernova or stars and comparing them to the same emmisions we can create and observe here on earth.

If they are the same, then we can conclude that, despite how long it took for us to visibly see those emissions here on earth, at a distance of however far away the object we're observing is in the galaxy/universe, that the rate of decay is constant.

Seeing how we can do this to any form of emission at any distance and the results are always the same no matter what variable, then it's obviously a constant decay rate.

If you'd like to learn more, visit any of the following links:

originally posted by: F4guy
a reply to: Ghost147


Except, it's not a supposition, we can actually test to prove it had a beginning.


originally posted by: F4guy
a reply to: Ghost147


Except, it's not a supposition, we can actually test to prove it had a beginning.

Be careful with the word "prove." Proofs are based on assumptions. For example, the young earth creationists assume that Genesis is the infallible word of a god.Geologists assume that ratios of the various isotopes of carbon are, and always have been, constant. If the assumption fails, the 'proof' crumbles.

posted on Jun, 5 2017 @ 01:51 PM
link
Given radiocarbon dating goes back farther then 6000 years, that tends to make that start date questionable. Of course if radiocarbon dating must be mentioned in the bible to the valid then too bad.