posted on Jun, 3 2017 @ 01:41 PM
link
I guess nobody can image peace any longer. Fewer and fewer public voices believe peace and co-existence are possible and the private voice seem to mimic the same. This has been getting worse over the course of my life and fighting off despair becomes ever more difficult.

While this endless fear and need to kill has been manufactured, I don't believe it's a conscious conspiracy. It appears more of the consequence of 'the
sociopathic standard business model' religion and it's priests.

Make no mistake, 'free market capitalism', is a religion - the US state religion.

Flying in the face of traditional 'Faith, Hope and Charity' religions, it has changed the equation to 'Faith, Hope and Love". None of which require pious people to take any action on their beliefs, merely 'believe' them and obey.

"Go shopping" has replaced "visiting the sick and imprisoned'.

What happened to people of good will? The 'widow' of the Christian bible that gave one of her two pennies to a beggar, where is she in modern society?

We've been conditioned by the forces of big business to believe there is a terrorist behind every tree and 'kill them all, let god sort them out'. Our, so-called' entertainment, to be successful (i.e. profitable) has ever more horrific killings and torture and sadism.

Who gains? Maybe a couple of thousand out of 7 Billion. The rest of us suffer fear, insecurity and hopelessness.

And a 'strong' man, who 'will protect us' takes over as a tool of the 'owners' and the cycle of fear, insecurity and hopelessness for 'the 99%' spirals onward to ????

We all have part of the solutions - just as we all carry part of the problem. When will we start listening to one another - acknowleging the 'other's' fear and talking about our own.

WHy do we 'blame' instead of 'take responsibility'? 'The mote in your own eye....'

I hope for a world where non-violent courage, rational courage, moral courage is valued and those who possess this courage are given power with the citizenry. Where 'bullies' (individual and collective) are called the cowards that they are and not lionized and given power over others.

A world where power is always accountable to the people and not just the powerful.

What do you hope for?

What is your solution to this "travesty"?

We havent had 'free market capitalism', but instead crony cartel corporatism.

Do you have a better system for the majority of than 'free market capitalism', that you can explain?

Hint: nothing is "free".

posted on Jun, 3 2017 @ 02:39 PM
link
Ever since I was a little kid I realized this world could never live in peace it is simpily not possible with all the different cultures and religions. someone somewhere will always have a problem with another group and it will lead to war like it has since civilization first started its human nature and it's not going to change anytime soon I'm glad people are finally embracing this fact of life rather then living in LaLa hippy rainbow land where single payer healthcare is funded by unicorn turds and and world peace is enforced by antifa with bike locks to the face...

originally posted by: FyreByrd
A world where power is always accountable to the people and not just the powerful.
What do you hope for?

An absolutely terrific post! I agree with everything you are saying an I feel your frustrations the same way.

There's no profit in peace for the military industrial complex.

Is it so hard to imagine someone using tax payer money to create a remote control system for commercial jets, fly them into 3 buildings, bring down 3 buildings with controlled demolition, and the reap trillions of dollars of profit in a 20 or 30 long war?

What I think is really interesting is every time last year when we had riots in any city the AP news announced worker's wages were having the highest increase in years. It seems rioting is the way to get out of poverty.

The powers that be have been putting the screws to the American worker for a really long time. I think at some point there will be a backlash. It's going to come from something nobody is expecting. Like home fusion power making fossil fuels obsolete. Something like all the gasoline stations in the US going out of business in 5 years. Something nobody would ever expect. Maybe anti-gravity devices will open up cheap space travel. Fossil fuel technology, that is the energy delivery business, hasn't had a major shake-up in 70 years. Something is coming. No one saw the internet in 1997 and now it's an essential part of our existence.

Never underestimated the power of human ingenuity to throw off our shackles of constraints. Despite of the negativity I'm hopeful and enthusiastic about the future. The young people today are brilliant and beautiful. It's all good!


I agree with your statement we have crony cartel corporatism and no free markets.

So if we have never had free markets in this country, how do you know free markets are the answer to all our problems when no one as ever experience it? Not only that, how do we prevent our system from degrading back into what we have now?

Our entire system is designed for one thing and one thing only. Preserve the aristocracy above every other consideration.

If man were meant to fly God would have given him wings.

Make no mistake, 'free market capitalism', is a religion - the US state religion.


The religion of capitalism is broken, scattered, divided, leaderless...its pride and dignity is forgotten... It is no match for the power of a Rockefeller at your side, kid. 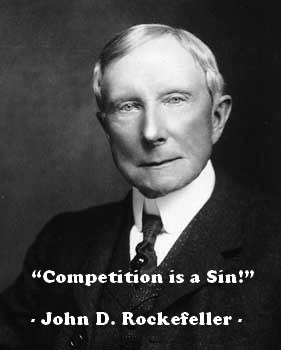 posted on Jun, 3 2017 @ 07:55 PM
link
Really the only way to solve this is as a human being is to put others first before you. Diplomacy, and peace with all life should be our singular, and collective goal as a species. But this idea seems to be too hard of a focus regardless if it's the best course of action to take, as there will always be people who choose to only think about there own selfish desires at heart, and never beyond that thought process, or they have lost all true kindness, and compassion in the name of harming or killing other people as an excuse. isis, usa, russia, middle east, china, the list goes on as a majority, collective group of people that do not want peace. War and destruction seems to always be the answer.

originally posted by: FyreByrd
WHy do we 'blame' instead of 'take responsibility'?

The irony in this quote from this opening post is almost crippling in its obviousness. I mean your entire post is literally you throwing blame and excusing lack of personal responsibility...