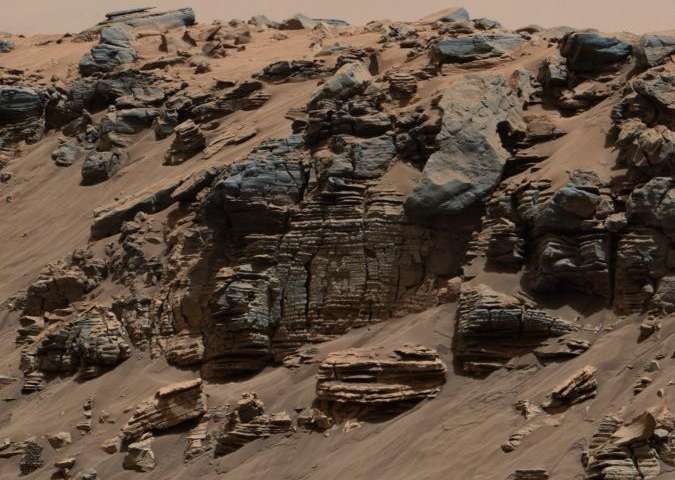 Sedimentary Signs of a Martian Lakebed (Shallow Part): This evenly layered rock imaged in 2014 by the Mastcam on NASA's Curiosity Mars rover shows a pattern typical of a lake-floor sedimentary deposit near where flowing water entered a lake. Shallow and deep parts of an ancient Martian lake left different clues in mudstone formed from lakebed deposits.

A long-lasting lake on ancient Mars provided stable environmental conditions that differed significantly from one part of the lake to another, according to a comprehensive look at findings from the first three-and-a-half years of NASA's Curiosity rover mission. While previous work had revealed the presence of a lake more than three billion years ago in Mars' Gale Crater, this study defines the lake's chemical conditions and uses Curiosity's powerful payload to determine that the lake was stratified.
…

We're learning that in parts of the lake and at certain times, the water carried more oxygen," said Roger Wiens, a planetary scientist at Los Alamos National Laboratory and co-author of the study, published today in the journal Science. "This matters because it affects what minerals are deposited in the sediments, and also because oxygen is important for life. But we have to remember that at the time of Gale Lake, life on our planet had not yet adapted to using oxygen—photosynthesis had not yet been invented. Instead, the oxidation state of certain elements like manganese or iron may have been more important for life, if it ever existed on Mars. These oxidation states would be controlled by the dissolved oxygen content of the water."

"These were very different, co-existing environments in the same lake," said [lead author] Joel Hurowitz. ... "This type of oxidant stratification is a common feature of lakes on Earth, and now we've found it on Mars. The diversity of environments in this Martian lake would have provided multiple opportunities for different types of microbes to survive."

Hum? So Gale Crater is actually Gale Lake. And it had a “varied environments”? Just say it! I’m sure you’ll feel a lot better if you talk about it. So why don’t you talk about it? At least call it an “ecosystem” even if it is just a chemical ecosystem.

Good science takes time. I guess. Nice to see that they did a complete review of the data. It also nice to see a rock that… uh, looks like a rock! Boring, typical, sediment rock. In this case, it is on Mars and is very profound news.

I’m parts of *meh* and “this slow drip…” mostly because I believed the Viking report from back then. There is life on Mars.
edit on 1-6-2017 by TEOTWAWKIAIFF because: added clipped, now bolded, quote. D'oh!

Honestly, what we have discovered there is utterly fascinating and profoundly impacting on our understanding of our solar system and universe.

And this was all achieved in what isn't even a partial percent of the length of tom humanity existed.

We're all waiting for the direct confirmation of life on another solar body, but waiting for that to happen shouldn't lessen the incredible feats that we're continuously seeing from these missions

I think that a sediment rock on Mars is more exciting the "big announcement" of 7 planets around a red dwarf.

I'm just tired of slow announcement of "life on Mars" that is taking forever. Viking data reported evidence that was quickly down played as contamination or something.

Seems logical. Earth and Mars exchange meteors. Life could have began on Mars and made it's way here.

PS - I clipped the guys quote which I have now added back in (the second bolded part). Kind of the whole point of the thread which I messed up!

edit on 1-6-2017 by TEOTWAWKIAIFF because: tag on response

posted on Jun, 1 2017 @ 07:06 PM
link
I enjoy the slow trickle. I've said it many times, I would be stunned if there is not at least microbial life under the Martian surface. As well as other places all over our solar system on a few planets, dwarf planets, and moons. A few moons could easily harbour some sort of intelligent life as we know it. And who knows what else...
Hell, even Mercury has some ice hiding in craters.

originally posted by: toysforadults
We are aliens from Mars.

You could easily be right about that.

They also thought it was highly probable that the strata layers of Mount Sharp would be easily visible from the rover, and those layers would reveal a couple billion years of geological data -- including data from the time Mount Sharp's sedimentary layers were being laid down by the waters in the lake that filled Gale Crater.

This was pretty well established as highly probable characteristics of Gale Crater/Mount Sharp prior to Curiosity landing there, and that is exactly why they chose it as the landing site.

Thank you for this info. I did not know the reason this "crater" was chose.

I guess that the lag is to not have confirmation bias in the data. That is cool but makes us 'tin foil hat' types spin our wheels.

originally posted by: TEOTWAWKIAIFF
a reply to: Ghost147
I'm just tired of slow announcement of "life on Mars" that is taking forever.


Extraterrestrial life is such an enormously important anouncement, that NASA is better get it right the first time they anounce it. Imagine finding out that it's a false positive, NASA's credibility and funding would suffer a big loss.

The matter of fact is that we haven't found any signs of life outside of Earth yet (unless you believe in conspiracies). We're just finding signs of past habitability on Mars. NASA's next Mars rover will actually look for signs of past or present life directly.

Why wouldn't they, and how could they prevent it if they wanted to?

well...for once...it would make them look foolish and irrelevant in the greatest search mankind has ever started. Search for extraterrestrial life. ...they have the "best experts"...best tech...biggest budget, and then some Joe Schmoe comes in and announces it ?

I dont see it happening.


how could they prevent it if they wanted to?

I dont even want to go there man... 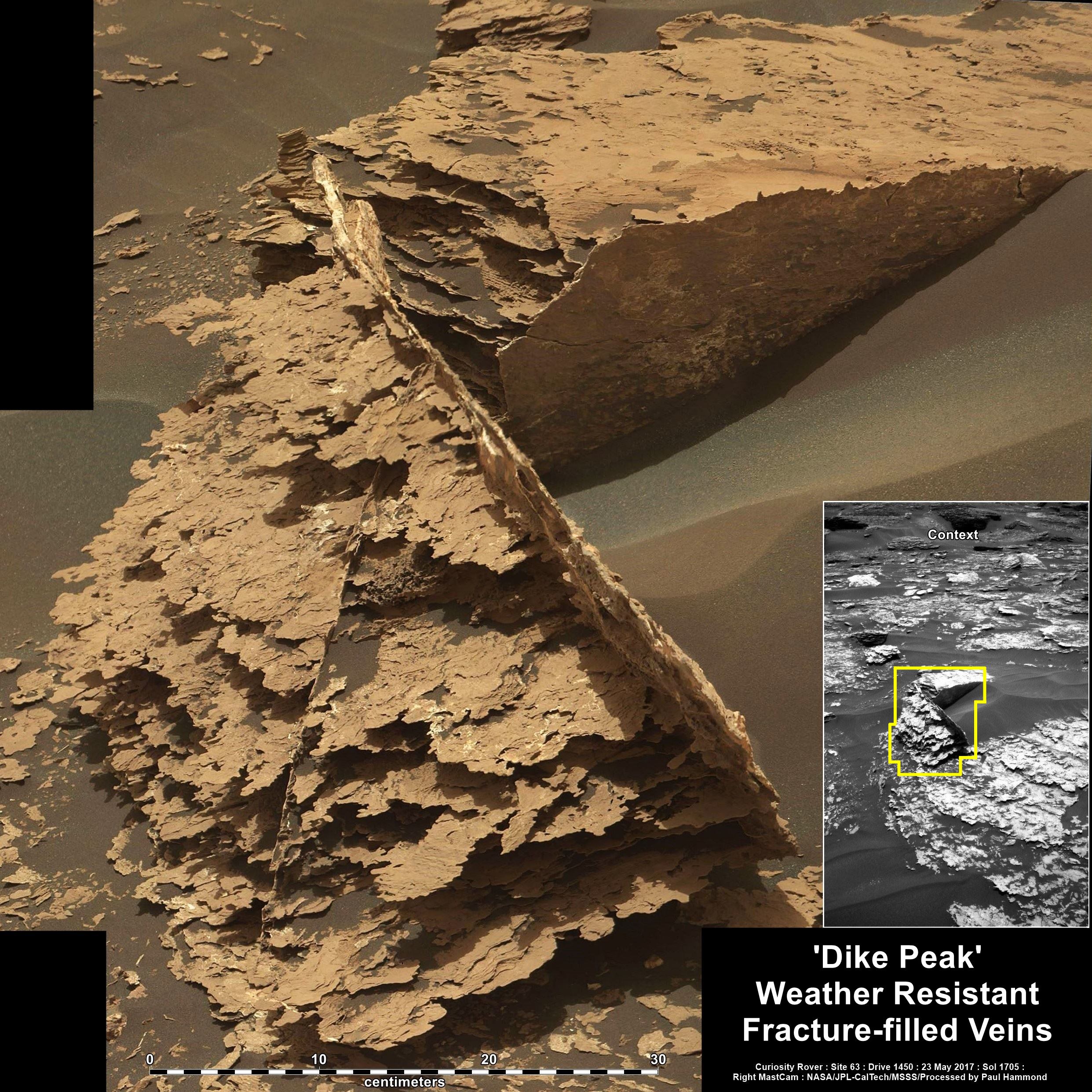 I didn't know such delicate formations could exist on Mars.

well..isnt it.."was there water on Mars and if it could support life" ?

The exposed layers of strata of Mount Sharp gives a story of a couple of billion years of Mars' geological, climate, and atmospheric history (with the older layers on the bottom, and history being read "forward" as the rover ascends up to the higher elevations around the mountain.

So the mission isn't simply answering "is there water?" (as I mentioned in a post above, they had a good idea that there was a water-lake in Gale Crater even before they got there, and was why Gale Crater was targeted; they could tell this from the orbital analysis of other probes). It is answering the question "were conditions on mars ever conducive to life as we know it?"

That answer can be found by reading the strata and gathering many other details and chemical analyses (other than just "water or not" to try to piece together Mars' geological and planetary climate history, plus tell us something about the atmosphere at the time the strata layer was deposited. Each successive layer tells a story about the time that layer was put down.

So the strata still have a lot to tell them, and it is all extremely relevant to the mission. Again, the idea that the strata of Mount Sharp would be exposed, accessible by the rover, and able to have many layers analyzed as the rover roved high up the sides was the reason the gale Crater/Mount Sharp region was chosen as the landing site.

Forgive me for sounding ignorant, but although i am aware that very minute concentrations of oxygen exist naturally-they are hardly detectable in primitive environments, would not oxidative layers such as these found on Mars be an indication of photosynthetic bacteria-it was always my perspective that oxygen in any detectable quantities (oxidative sediment layers) was a by product of photosynthetic LIFE?
edit on 2-6-2017 by HiddenWaters because: Spelling