posted on May, 31 2017 @ 10:36 PM
link
I've seen many UFO video clips over the years and most are easily explained. This one is baffling to me. The clip begins with two, bright orbs spewing flames over a row of houses. At first, I thought it was just some fireworks or flares someone had shot in the air. This object moves in a zigzag type of pattern as the flames are emitted from it. When the "pyrotechnic" display suddenly stops, a single, lighted orb emerges from the smoke. It travels away from the scene and briefly flickers and disappears for a split second. Then it lights back up, while making a 180 degree turn. It heads back to where it was before and is briefly hidden by the roof line of a house. Suddenly, another round of flame is emitted from this object, but it's not a steady flame...more like "puffs" which makes it move very erratically. Once this display stops, this single orb becomes two lighted cylinders connected in the middle by a tiny lighted orb. It moves away very steady and is seen doing an aileron roll, until it goes out of view.

Now, common sense says this is a man made object and it probably is. I thought it could be an airplane, but there's no sound of an airplane. Secondly, when the flames come out of this object the 2nd time, it moves too erratic to be an airplane IMO. Thirdly, as it retreats from view, it doesn't look like any airplane or drone for that matter. I doubt a drone could hold that much "pyrotechnics" and not be destroyed in the process of it going off.

Another interesting backstory to this sighting, is the fact that Wiltshire has had a history of odd UFO sightings in the past.

Here's a clip shot back in 1969 concerning Warminster UFO's. Warminster is a town located in western Wiltshire, UK.

Back in July 2013, this sighting was captured in Wiltshire:

Here's a story about a Wiltshire UFO back in February 2016:

EXCLUSIVE: The truth is out there - in WILTSHIRE? 'UFO' seen hovering near village UFO hunters are set to be sent into a frenzy after a strange anomaly was spotted in the sky near a sleepy village in England.

He racked his brains for an explanation to the strange phenomenon, but couldn’t reach a viable conclusion due to it’s lack of movement and sound. He told the Express Online: “At first I thought it was a Chinese lantern but it wasn’t moving. It could have also been an Apache, but there was no noise. “I went back the next day in the day time to see if it was a crane or something, but there was nothing there.”

This is not the first time that Wiltshire residents have encountered alien phenomena which they are unable to explain. From 1965 to 1975, the south west county’s residents reported many UFO sightings. On August 20 1965, a couple on a motorcycle felt it stall as two white spheres of light hovered overhead, changing colour.

The same year, on October 8 1965, a woman driving towards Warminster felt her car lose power after seeing a bright orange ball before the vehicle stopped. She then saw a dark object rise from a nearby field, sparking red and blue, before the engine started up again. In 1967, a businessman driving past Clay Hill felt his car become hot and heard a high-pitched noise before the engine failed. He got out and saw a glowing white disc overhead before it sped off. In August 25 1975, a serviceman driving near Warminster reported to a police patrol that his car malfunctioned after seeing a bright-red light in the sky.

Crop circles in Wiltshire, UK too! From August 2016, comes this clip:

From November 2016 comes this story about UFO visits in the Wiltshire town of Warminster:

IS THIS BRITAIN’S AREA 51? Pretty Wiltshire town of Warminster is a hotspot for ‘UFO visits’, unexplained lights and eerie happenings nobody can explain

Warminster’s mysterious UFO history really took off on Christmas Day in 1964 – and the town’s residents still want answers half a century later. It’s one of the strangest cases of mass paranormal sightings ever in the UK, and it propelled the south western town into the news. On that fateful Christmas Day, a ‘detonation noise’ rocked houses in the town’s Boreham Field housing estate before a ‘monstrous orange flame was seen in the sky, cracking and hissing’.

There are also strange claims of cars and motorbikes losing power and being shaken by vibrations between 1965 and 1975. Reports of paranormal objects been seen in the area go back to the 50s, and most of them were sighted in the Cradle Hill and Clay Hill areas of the town – next to military land on the edge of Salisbury Plain.

Here's the latest clip, posted on YouTube on May 28. (You really need to see this in full screen mode if possible):

Could this be the same object caught 2 days later, on May 30?

Thanks for reading...any ideas? I think it has to be military of some kind since there are military bases in that area. Who knows?

Those last two are some of the most intriguing videos I've ever seen. I just don't see a rational explanation for them. But I also don't understand why an alien craft would behave this way. Mind boggling. Can't wait to see what others have to say. Great find S&F.

Thanks...yeah, I agree. Could be military, but why do this near a residential community?

Agreed, don't think it is military unless it's some sort of psy-op research.

Thanks...yeah, I agree. Could be military, but why do this near a residential community?


Wow, nice find. Good point, that'd be pretty dangerous. Could they maybe be someone playing with a drone or other(well, UFO of course!)?

posted on May, 31 2017 @ 10:57 PM
link
In the video below I believe these are drones with some type of pyrotechnic attached for effect. Their is nothing UFO like in their movement and they have the feel of a remote operator trying to make them look like UFOs.

posted on May, 31 2017 @ 11:06 PM
link
Maybe a drone with some kind if flame thrower atttached, or sparklers or something .....what gets me Is that the person filming these things never runs over to the next neighborhood to really see what the hell,it is ?!...

Could be, but I didn't see anything on YouTube that looks remotely as intense as the one shown in the clip. Exactly, where would that amount of pyrotechnics be stored on a $1000 drone and you would need to rig a remote controlled igniter on the drone as well. Unless you're wealthy and could care less, I don't see a person risk destroying their drone for stunt like this. But who knows?

I know...I'd be running my ass off to see where it went.

Those fire-spitting UFOs are indeed incredible. Since the videographer had to go to full-zoom to get good footage, those may have been more than a mile away? Kudos to him for having such a steady hand at high zoom!

It's curious that both videos are 1min45secs. Maybe that's the free YouTube upload limit for Hi-Def video?

Think you nailed what they are
Rainbows
Jane

posted on Jun, 1 2017 @ 04:26 AM
link
This is the first UFO thread with good footage in a while. I am hoping a member can plot the movements in a 3d graph so we can rule in/out things like drone, etc..

I hate to say it but, I don't think we'll see the real thing until 3D Graphics/CGI become indistinguishable from real life. That's when the World will witness an 'alien invasion'.

I agree that a drone seems the most likely explanation; I wonder though how much flammable material would be required to produce the effects observed, and what ignition source(s) would be used as the pyrotechnics appear to stop and start again.

This question also leads to the size and capabilities of the drone. I would presume that, given the inclusion of landmarks in the vids, it should be possible for those with a mathematical nature (and those with the relevant computer package?) should be able to provide a rough range for the size of the craft?

posted on Jun, 1 2017 @ 07:14 AM
link
It could be any of the suggestions, but the 2013 one is military flares, one of the others is likely sky divers, and likely from the same source but not necessarily.

originally posted by: shawmanfromny
a reply to: Outlier13

Could be, but I didn't see anything on YouTube that looks remotely as intense as the one shown in the clip. Exactly, where would that amount of pyrotechnics be stored on a $1000 drone and you would need to rig a remote controlled igniter on the drone as well. Unless you're wealthy and could care less, I don't see a person risk destroying their drone for stunt like this. But who knows?

What leads me to believe it is a hoax is at the 1 minute mark. The object moves in a geometric pattern in the shape of a half octagon. It starts on the right. Moves straight up. Then to the left up and at an angle. Then left again but straight. Then left and down at an angle and then down straight.

I watched my friend who owns a $4K drone do this just the other week when we were testing rigging heavy items to the drone. It literally moved the exact same way as in this video.

He flew it in this manner to test how stable the drone would be with the heavy item rigged.
edit on 1-6-2017 by Outlier13 because: (no reason given) 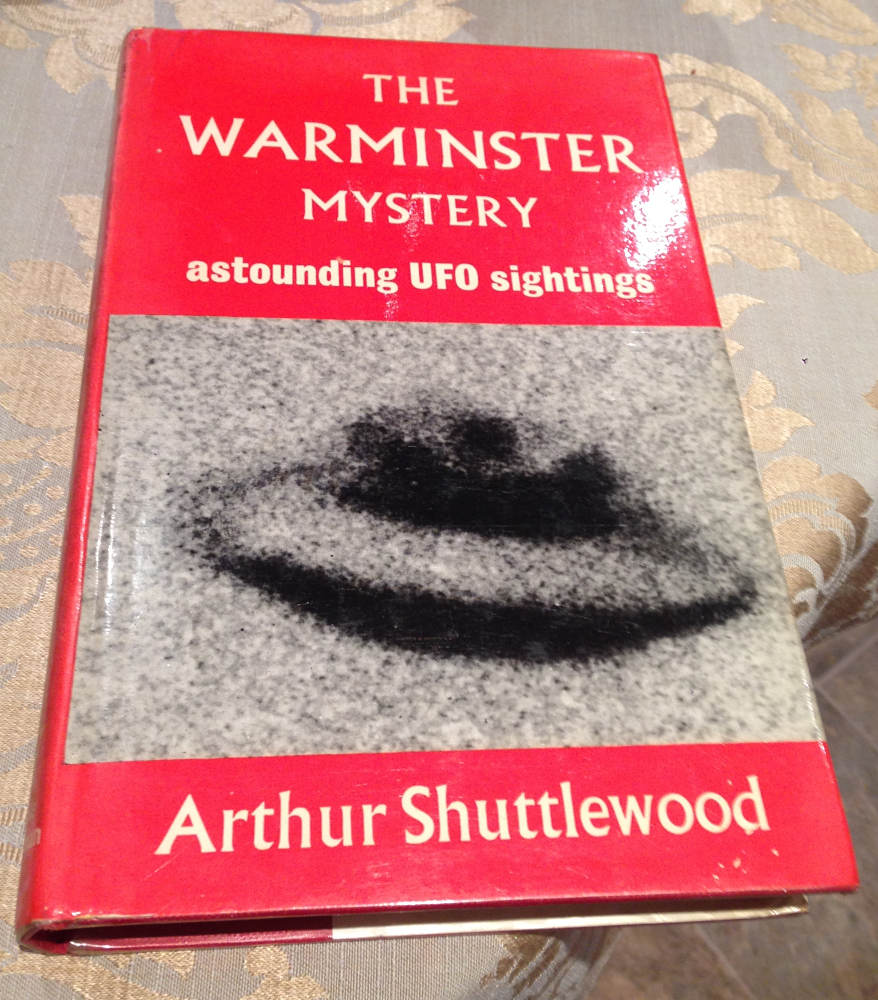 The cover picture was taken by factory worker Gordon Faulkner, 23, with a 35mm Halina camera, set on 'infinity' at 1/50th of a second.

Here's the latest clip, posted on YouTube on May 28. (You really need to see this in full screen mode if possible):

Could this be the same object caught 2 days later, on May 30?

Thanks for reading...any ideas? I think it has to be military of some kind since there are military bases in that area. Who knows?


It is just Aerosparx. Aerosparx is a display team based in Wiltshire. Aerosparx can operate as a solo or a two-ship.

The clue is in the details. From the video description at following link.

The video, taken by a Frome resident, shows a streak of light circling over the National Trust owned land in Corsley.

If you zoom out you will see the filming location at Frome which is North West of the airstrip.

It doesn't help that the video filmed over the top of the houses is poor quality and most of the pyro display is out of focus.

edit on 5/6/2017 by tommyjo because: Malformed link corrected

originally posted by: Outlier13
In the video below I believe these are drones with some type of pyrotechnic attached for effect. Their is nothing UFO like in their movement and they have the feel of a remote operator trying to make them look like UFOs.

Could you provide us with some genuine UFO footage for comparison by any chance? I'd like to see the difference between real UFO footage and fake UFO footage.