She has been a standard on that coverage for years.

There's reports that some other "associates" are cancelling her as well. 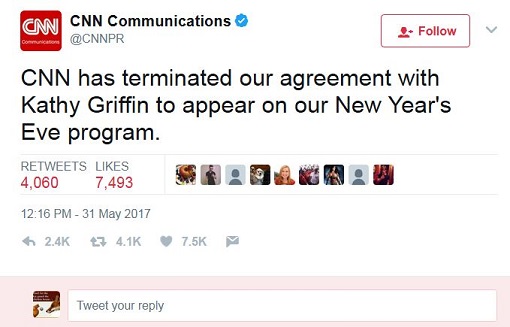 CNN has fired Kathy Griffin from their stupid News Years Eve show. It only took the fake news network 26 hours to come to a decision to terminate Griffin after she became too toxic by revealing she is a Democrat terrorist. CNN was quiet all day yesterday on their employee’s situation. Today, they couldn’t hold out any longer as people flooded the phone lines to CNN to complain about the terrorist. So CNN had to fire Kathy Griffin. This is the second firing for Kathy Griffin since revealing she is a terrorist. Route 66 Hotel and Casino in New Mexico cancelled a July show she had planned there yesterday.

Tempter
+7 more
posted on May, 31 2017 @ 01:54 PM
link
It's like sweet justice seeing the left take a beating on one of their own after the windfall of attempts to fire conservative voices, justified or not.
edit on 31-5-2017 by Tempter because: (no reason given)

Because that's what Kathy Griffin is.

originally posted by: Bluntone22
My hats off to CNN.
They did the right thing.


They just knew they couldn't afford not to. If this story hadn't gotten so much publicity and negativity, CNN wouldn't have batten an eye.

I just think Common Sense is not synonymous with "Political Correctness", and Kathy Griffin is an idiot for thinking there would not be negative consequences as a result of her desperate "artistic" stunt

Her terrible act of cultural appropriation was disgusting.

Oh wow, look at that!

CNN has a spine, maybe.

I have a hard time believing that Griffin didn't know what she was getting into.

I mean unless she was MK Ultra-ed into doing that photo shoot then surely she knew that this was going to blow up one way or the other... and that's likely why she did it.

All press is good press. She will now be known for doing this. Whether or not it's in poor taste is kind of irrelevant... these are the actions of an attention whore.


She's been quoted before about these types of things...

Well, carrot top doesn't have a career again. Guess he's going to go back to working out and being jacked.


No, her actions had consequences.

The hysterical American left secretly love the image of a decapitated president trump...

If memory serves game of thrones used a severed George w bush head on a pike...

Personally I don't care...she is not relevant nor is she actually considering decapitating trump....either way, CNN has a right to protect their brand and they made the prudent decision...I doubt David Blane could rape a Hillary doll and keep his show on whatever the heck channel he is on...

They fail to see life is a pendulum. It swings back and forth.

All their PC crap ultimately will and is coming back to hurt their own.

Also the other day had Olivia Wilde, a major anti-Trump critic fat-shaming Trump on social media. She was roasted for that. But that's what happens, fat is beautiful and body-shaming is evil becomes one of their talking points but ultimately, they participate in the same thing they so strongly stand against.

And it burns them in the end.

I don't like Kathy Griffin, but calling her a terrorist is a little over the top IMHO. The photo was distasteful and disrespectful but I highly doubt she caused any real terror. (She only does that when she opens her mouth)

They just knew they couldn't afford not to. If this story hadn't gotten so much publicity and negativity, CNN wouldn't have batten an eye.

I'm afraid you may be right about that. But it's heartening to me to know that even CNN knew this crossed a line with their viewers -- we the people. Losers will be losers but I'll be thankful most people - the vast majority of people -- recognize them for exactly what they are.