In that case, you are forgiven.
In fact, condolences....

Thanks momma. I need them.

Everyone screws up, altho drinking and driving when you clearly can afford a taxi is ridiculous. IIRC wasn't Greg Norman
a "serial cheater"/womanizer? Last I heard he damn near took his hand off with a chainsaw? Here's some stats of Woods that are mind boggling.

683: The total number of weeks Woods has spent at No. 1 in the Official World Golf Ranking. That's 352 weeks (or nearly seven YEARS) more than No. 2 Greg Norman.

3: Times Tiger has had at least a five-tournament winning streak. No one else has done it in the past 60 years. Woods also has three of the five longest streaks, including a personal best streak of seven in 2006-2007.

5: Times Tiger has won a major championship with a score of 18 under par or better. It's only happened eight times total.

18: No, it's not Woods' major total, but it is the number of World Golf Championships he's won. Dustin Johnson and Geoff Ogilvy are second on the list with three WGC titles.

8: Number of times Tiger has won on a single course (Torrey Pines), a record. Oh, right, he's done it on two other courses (Bay Hill and Firestone) as well. 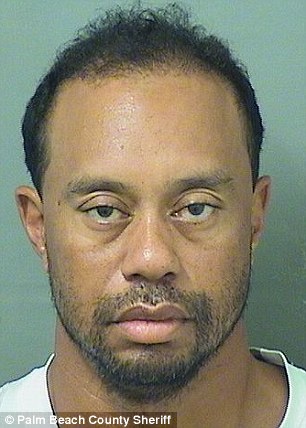 You know what's weird, is as a golfer I was interested in how Tiger had such control over his mind while he played. He almost seemed robotic. So I was looking up mindcontrol to learn how he does it and that is how I ended up here on ATS.
This pic completes the circle.

Seen this post, this is the first I heard of this. Turned it too the golf channel and they are all over this. Looks like he has been hitting the booze hard judging by the puffiness of his face. Just my own observation from my own experiences.

I really hope he figures out what the deal is and gets his sh together.

Unless this is a honest mistake, then he will be embarrassed and move on.

- 300am arrest - where are you coming from / and going to Tiger at 300am.
- his house, yacht, steakhouse restaurant (which is said to have been closed Sunday and Monday for a private party) business offices are all North of where he was popped as he was driving south away from those areas.
- military Trail runs N-S . He was traveling south away from the more affluent areas to the lower income areas.
- his current girlfriend was in Dallas and is said to have been angry when she heard the news.
- reports said Tiger gave the arresting officer a hard time and refused The breathalyzer ( why refuse if your not drinking? It would help his case if he truly did mix meds unintentionally)

My guess is that the girlfriend was out of town for the weekend.He partied all weekend on the yacht. Came back Sunday night, partied at his restaurant and picked up a piece of local talent and was driving back to her place.

I wish I did that this weekend ( except the DUI) . Sounds like a blast! Tiger invite me down, I'll supply the Uber Black service all weekend!

posted on May, 30 2017 @ 12:31 PM
link
Just heard he issued a statement claiming there was no alcohol involved and it was an unexpected reaction to prescribed medicine. I'll check into that more durring lunch.

Golfer Tiger Woods was found "asleep at the wheel" with the engine running when he was arrested, US media reports say.

[Mr. Woods] was found at the wheel of his Mercedes, in the right lane, and had to be woken by a police officer early on Monday.

Charged with Driving Under the Influence (DUI), Mr Woods blamed "an unexpected reaction to prescribed medication".

He maintains that alcohol was "not involved" in the incident.

Both, out and the car running is bad news! Usually there are mandatory jail sentences when this happens (at least in my neck of the... woods). Rehab is usually mandated to. If alcohol was not involved then it looks likely it was pills. That does not look good either.

originally posted by: seasonal
a reply to: Tarzan the apeman.

I really hope he figures out what the deal is and gets his sh together.

Unless this is a honest mistake, then he will be embarrassed and move on.

I loved watching golf when he was playing. Now, not so much. I wish him the best and truly hope he does get it together. It would be great to watch him play again.

posted on May, 30 2017 @ 01:20 PM
link
He should go full WWE bad guy mode on tour ( if he comes back). Yell at the crowd. Party all night, be a bad influence on young tour players. Grow a Hollywood Hogan beard and shave his head. Hit on all the tour players wives.

They are saying he had no booze in his system. But a bunch of drugs. I stand corrected.

They are saying he had no booze in his system. But a bunch of drugs. I stand corrected.

Yeah, according to the police report his BAC was 0.000. And he had admitted to taking some kind of meds. Whether he was under the influence due to abuse, or whether he took the prescribed dosage after being too tired and they knocked him out, who knows? Regardless, his car was all banged up.

Stay away those Rx Pills

They dropped the criminal investigation so out came his toxicology report.

I saw the other other day that he had six or so in his system, but I didn't bother to look and see which.

That's a lot of #, and especially dangerous to mix together.

Yeah, it is a mixture where you could fall asleep and never wake up again!

I was impressed. I think I puked on one 5 ml (??, wrong size I think. But it was the mid-size dose for an adult) hydrocodone shot. I didn't like that feeling either. Like pot but lasted waaaayyyy too long for my liking. I would rather feel pain than be under that influence again. Then there others who learn to like the way it makes them feel.

Kurt Cobain said he stopped drinking when he became a regular user. He said everybody he can think of who has ODed drank alcohol. Imagine if Tiger had!

Treatment was a smart choice. The alternative is always the same: end up shooting H.