posted on May, 28 2017 @ 05:35 PM
link
Just as suspected, it looks like Donald Trumps action.. or inaction on the Paris deal is rubbing foreign leaders the wrong way.

Environmental protections are an obvious required measure... of course he was the o my one not to agree.

Now Trump is stuck between a rock and a hard place diplomatically. Will he hold up his campaign promise and refuse to sign the deal? Or will he cave and cross all of his loyal followers again?

Frankfurt am Main (AFP) - Europe "must take its fate into its own hands" faced with a western alliance divided by Brexit and Donald Trump's presidency, German Chancellor Angela Merkel said Sunday.

"The times in which we could completely depend on others are on the way out. I've experienced that in the last few days," Merkel told a crowd at an election rally in Munich, southern Germany.

"We Europeans truly have to take our fate into our own hands," she added.

While Germany and Europe would strive to remain on good terms with America and Britain, "we have to fight for our own destiny", Merkel went on.

The chancellor had just returned from a G7 summit which wound up Saturday without a deal between the US and the other six major advanced nations on upholding the 2015 Paris climate accords.

Merkel on Saturday labelled the result of the "six against one" discussion "very difficult, not to say very unsatisfactory".

The US president had earlier tweeted that he would reveal whether or not the US would stick to the global emissions deal -- which he pledged to jettison on the campaign trail -- only next week.

On a previous leg of his first trip abroad as president, Trump had repeated past criticism of NATO allies for failing to meet the defensive alliance's military spending commitment of two percent of GDP.

Observers noted that he neglected to publicly endorse the pact's Article Five, which guarantees that member countries will aid the others they are attacked.

The omission was especially striking as he unveiled a memorial to the September 11, 2001 terrorist attacks against the US, the only time the mutual defence clause has been triggered.

Sunday's event saw Merkel renew bonds with the Christian Social Union (CSU), Bavarian sister party to her own centre-right Christian Democratic Union (CDU), ahead of a parliamentary vote in September.

Polls show the chancellor, in power since 2005, on course to be re-elected for a fourth term.


That's some pretty out in the open displeasure Merkle is brandishing

She's very respected in the international community... how will this affect our diplomatic relations with other foreign countries under Trumps reign?

lordcomac
+25 more
posted on May, 28 2017 @ 05:41 PM
link
Would that be the same merkle who turned Germany into a gang rape and crime filled utopia?
Yeah, I bet she doesn't approve of anything Trump does.

To hell with Merkel. Her useless ass has trashed all of Europe.

Do I need to say anything more.

The only thing that we should give 2 shi1s about from Merkel is her retirement. She has devastated western civilization.

As for the Germans... half or more of you are idiots... same idiocy we have here in the U.S.

I don't give 2 Sh!ts about Trump but thank god he is not a god blessed idiot like the last leftest moron.
edit on 28-5-2017 by infolurker because: (no reason given)


queenofswords
+2 more
posted on May, 28 2017 @ 05:48 PM
link
Donald Trump will take a long hard look at the Paris deal and he will have multiple discussions with multiple entities.

Donald Trump's supporters know him. He is trusted. People have heard him say on more than one occasion that his positions may evolve. If he changes his stance on something, he will explain it thoroughly to The American People.

He brings it to The People via Twitter and via rallies and some media that allow him to explain his positions rather than lie and twist things. He doesn't leave it up to the failing NYT and dishonest WaPo and Crooked News Network and others to interpret his positions.

President Trump is trusted by his supporters, and if he decides to pull out of the Paris deal, he will explain why. So far, he hasn't been wrong about much.

Merkel? hmmpf! She has her own agenda, and, imo, it may not be in the best interest of the German people.

While I am no fan of Trump, I can't take Merkel seriously after she allowed Radical Islamists into her country.
edit on 5/28/2017 by starwarsisreal because: (no reason given)

posted on May, 28 2017 @ 05:52 PM
link
Merkel is playing the game of separation. Everything she does is now focussed on the opportunity twice denied in the last 100 years, and that is for Germany to run Europe, or rather the EU. There is a distinction here because Merkel only speaks for the EU. The UK is part of Europe, but leaving the EU.

posted on May, 28 2017 @ 05:56 PM
link
Germany never was a reliable partner of Europe or the US. Only if we did what they wanted to do would they be reliable, nobody did well at challenging Germany. They seem to be the most headstrong state in the group, it is either their way or no way comes to mind.

("The times in which we could completely depend on others are on the way out. I've experienced that in the last few days,")

The US needs to concentrate on it's own people for once.

posted on May, 28 2017 @ 06:04 PM
link
Angela Merkle has devastated Western Civilisation? Get a grip. This is why Europe is stepping away, hysterical bull# like that.

Time to close our European military bases. Especially the ones in Germany!!! Exorbitant military base rents from the US allows the German people to have free healthcare!

They are not even our allies! Time to bring the troops home!!! AMERICA FIRST!!!

posted on May, 28 2017 @ 06:06 PM
link
a reply to: Groot
Dear god the arrogance and ignorance is outstanding, when the # has American done anything for Europe that wasn't to benefit itself?

posted on May, 28 2017 @ 06:07 PM
link
Until the Russians burp or fart then she'll be saying that we need to be closer. They're free loaders anyway let them defend themselves.

originally posted by: WilsonWilson
a reply to: Groot
Dear god the arrogance and ignorance is outstanding, when the # has American done anything for Europe that wasn't to benefit itself? 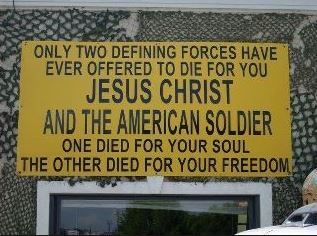 posted on May, 28 2017 @ 06:08 PM
link
Trump is a mess. But Merkel is an absolute idiot on all accounts. She is so obtuse as to cheer the downfall of Germany and western civilization as she orchestrates it.
edit on 28-5-2017 by pirhanna because: (no reason given)

posted on May, 28 2017 @ 06:09 PM
link
To a certain degree she is right. Brexit certainly will mean a more distant, if not completely messed up relationship between Britain and the EU. Trump also has been saying the rest have to bear more of the burden and that the US cannot always be there.
She's looking to become the defacto head of Europe and we're letting her.


originally posted by: WilsonWilson
a reply to: Groot
Dear god the arrogance and ignorance is outstanding, when the # has American done anything for Europe that wasn't to benefit itself?

And the subsequent military protection for them on our tax dollars for the last 70 years. And the economic rebuilding subsequent to ww2. Quite a lot a really.