Hillary Clinton Has A New Excuse For Why She Lost

Both are in the millions, correct?

originally posted by: roadgravel
What are the numbers on the score card for Trump won, Hillary lost threads and articles?

Both are in the millions, correct?

Hillary will never accept that she was at fault. She's a leftist douche-bag. It's always someone else's fault.

I regret that it has come to the point where I have to send you this mail.

You're a disgusting piece of sh1it with a hell of a lot of blood on your hands. I thought that maybe after your humiliating defeat, you would retire gracefully.

Sadly, you're on my TV screen again with a load of morons cheering you. I don't know why they are cheering you and I'm not entirely sure that they do either.

The left wing had a beautiful opportunity to make the world a much better place but unfortunately, they completely f#cked it up.

Beating you in an election was easy, Hillary. You didn't even try to win which leads me to the conclusion that you had absolutely no intention of winning or you're a complete idiot.

Either way, I think you should get off the world stage and crawl back to your cave with your ever faithful husband. 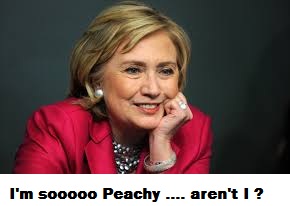 While I agree it fits the Democrat party perfectly, some might prefer the original...by The Tempations. But now that I've tried rwi e to insert it from Youtube without success, I see why you might picked a different version!

posted on May, 28 2017 @ 06:00 PM
link
Why is she relevant anymore? Shes a crook that lost an election.
Go home. Shut your trap. If you werent the worst candidate in the history of presidential candidates on the ballot, youd be president right now. You lost to a dickish buffoon. What does that make you? A goddammed catastrophe.

Strong words but the logic seems to be there. I wish people would let her fade into oblivion.

posted on May, 28 2017 @ 08:05 PM
link
Hey - remember on Nov 8th when it became evident that Trump won and then I was watching CNN and then Hillary came out to the DNC convention podium to graciously accept defeat & offer Trump her congrats and for all Americans to rally behind the administration and unite to make America great again?

DO you remember Hillary doing and saying that?

What sort of a moronic bi-polar POTUS candidate calls half the country racists then refuses to do a press conference for over 280 days and upon defeat is so low-energy that she does not even give her supporters and financial donors the courtesy of presenting herself in defeat. A truly pathetic P.O.S and an embarrassment to the US government. As long as she remains relevant, the US can never move forward learning from their mistakes. Blame Oprah and Ellen et al for keeping her relevant

But yes, fake news, Comey, 66+ million racist deplorables, Vlad, Trump and others is why Hillary lost - and it's true. If Hillary was the only candidate offered to the American people, and no other humans existed on the planet - she would have won by one vote (final vote tally: 1-0).

She is a alcoholic drug addict - ain't no way she's admitting to the problem, just give her another fix and hope she overdoses.
edit on 28-5-2017 by Sublimecraft because: clarification on why it's not Hillarys fault (mega-eye-roll)

I think that both Hillary and Clinton are alcoholics, because that is the way they can stand each other.

Hillary needs to understand that she matters no more.

Beside that she is behind all the crap that is fueling the news that is her last minute legacy against Trump presidency.

Nothing worst than a scorn woman.

I wish people would let her fade into oblivion.


I wish she would let people let her fade into oblivion. She retreated into the woods after the election. There were some jokes for a couple weeks, then she faded away.

Then she came back, complaining about the election.

Then she came back again starting up (yet another) anti-Trump movement.

Then she came back again complaining more about the election.

The witch is harder to get rid of than an advanced case of herpes!