One, who is a student at the University of Maryland, stabbed a black Army officer while intoxicated. It is being investigated as a possible hate crime since the suspect belonged the Facebook Group "Alt-Reich: Nation," a white supremacist group that apparently posted derogatory comments about minorities.

The other suspect, a known white supremacist in community, who is said to have had a head injury and is mentally ill, stabbed and killed two people who were defending what were described as two Muslims who the suspect was berating on a MAXX train.

What is this madness coming to these past few months?

the man "was on the MAX train yelling various remarks that would be best characterized as hate speech toward a variety of ethnicities and religions. At least two of the victims attempted to intervene with the suspect and calm him down. The suspect attacked the men, stabbing three, before leaving the train."

Witnesses told the police that he was harassing two women who appear to be Muslim. One was described as wearing a hijab. One of the men he stabbed died at the scene, one was pronounced dead at a hospital, and one is expected to survive.

Christian is a known right wing extremist and white supremacist. On April 29, Christian showed up to the right-wing "March for Free Speech" on 82nd Avenue in Montavilla with a baseball bat in an attempt to assault left-wing protesters. The bat was quickly confiscated by Portland police officers. He ranted how he was a nihilist. He'd soon yelled racial slurs ("# all you n*****s") and gave the Nazi salute throughout the day. He yelled "Hail Vinland" throughout the day.

Officials said Collins was with two friends waiting for an Uber ride when they spotted Urbanski screaming. The suspect then ordered Collins to "Step left, step left if you know what's best for you," before the fatal stabbing, according to charging documents.

Urbanski belonged to the Facebook group “Alt-Reich: Nation,” where members would post derogatory posts about blacks and others, police said.

The surgence of white-supremacist hate crimes is increasing, since here is another recent one, if anyone recalls:
Asian Man Beaten by Man Shouting ‘We Are White Power,’ NYPD Says


A wealthy Manhattanite was arrested for beating an Asian man while shouting about immigrants and “white power,” police said.

This is madness. What is causing all this hate and violence?

This is NOT the MUD PIT but the social justice forum. Take your political troll attempts elsewhere and stick to the topic.
edit on 27-5-2017 by Liquesence because: (no reason given)

originally posted by: Liquesence
This is madness. What is causing all this hate and violence?

This is madness. What is causing all this hate and violence?

Well if you want to pick two out of the thousands per year (these have yet to be classified as hate crimes however), I would ask that you catch up.

Tons of a holes out there.

posted on May, 27 2017 @ 11:46 AM
link
That Jeremy dudes Facebook is a trip through the mind of an extremist who suffers from mental illness.

I like the mugshots. Kill the killers. No mercy.

The amount of hate crime committed against Whites would be staggering if authorities were allowed to classify them as such.

The SJW philosophy of current times is to blame.

Yeah, blame the SJW rather than the people who actually commit the crimes.

originally posted by: Liquesence
a reply to: JinMI

Do you have evidence to back that up? I don't know either way, I'd like to see the statistics on this.

That is a lie, hate acts committed by minorities against whites is always greater. 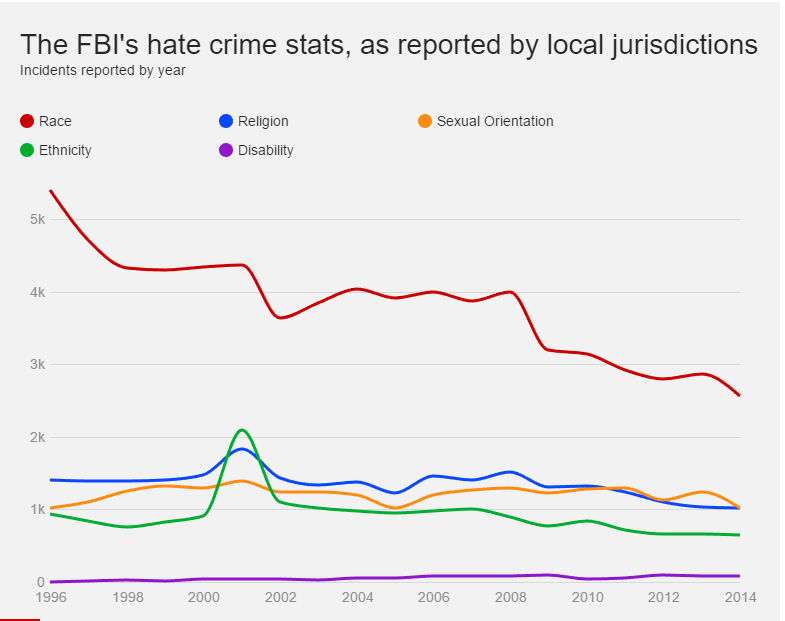 The FBI reports that the numbers of hate crimes have decreased over several years, with the exception of 2015. Regardless of the year, however, the hate crime count is underreported to the FBI, explained Stacy. Some state, city and local police agencies simply don't collect or disclose the data.

originally posted by: Liquesence
a reply to: JinMI

Not really. The UCR shows that about half of hate-crime offenders are white, and it's been that way for years.

That is a lie, hate acts committed by minorities against whites is always greater.

I am grateful for you posting this. I was too upset to do it myself this morning.

My boyfriend and I take that train to and from work, five days a week. Our roommate lent us his car yesterday so we drove. We would have been on that train (that station is close and one of our first stops) and we would have intervened. And likely had our throats slit like those two did. Especially John. He's a scrappy man who never backs down when faced with redneck stupidity threatening innocent people around him (he's a reformed cowboy but he still fights at the drop of a hat, heh). He would have been the first to die, I'm sure.

The "mental illness" angle is bull#. He's an ex-con (kidnapping) and a well-known white supremacist in Portland. A while back, his right-wing fervor was ridiculous enough to make the news when he showed up at the Milo-inspired "free speech" protest wearing an American flag as a cape and wielding a baseball bat. Most right-wing extremist end up giving off the "not right in the head" vibe after they've been indoctrinated enough so nobody is buying that. He acts like his peers here (there's not many, thank the goddess).

The neighborhood is super shook up. We don't allow that here. In fact, you might notice it's one of the few stories of hate crime where somebody tried to intervene. It's because it is what we do here and I hope this doesn't make us stop.

This is honestly the second time in my life I've considered getting a gun.

(post by Luceononuro removed for a manners violation)
Shamrock6

Hilarious that you're calling another member a fascist psychopath for espousing killing killers right after your "come to OKC and try that" line.
edit on Sat May 27 2017 by DontTreadOnMe because: (no reason given)

originally posted by: iTruthSeeker
The SJW philosophy of current times is to blame. Everything is anti-white so it would seem that the crazy deluded ones will inevitably strike back. Either way it is a non story really.. What does this make, 3 "White supremist" attacks in the last few years? The violence towards Whites is astronomically higher, and people know it is being hushed hushed.

Yes... a man threatened two Muslim women on a train, slit two throats, and stabbed another... BECAUSE HE FELT THREATENED.

# off. All of you who agree with that.