Not really - unless you live in the area. But how about sending letters, faxes, texts to your representatives? Republican, Democrate or Independent and demanding an independent audit of this budget proposal. I'd even want an international one - but I do know that will never happen - 'cause 'we be 'Merican's and are special.

I'd call for articles of impeachment to be drawn up as well. Let our public servants know that you will not be bullied.

Here's how Larry Summers summed it up (Summer-ized? So many potential puns here) in his blog (scroll down to 5/23):

Apparently, the budget forecasts that US growth will rise to 3.0 percent because of the Administration’s policies—largely its tax cuts and perhaps also its regulatory policies. Fair enough if you believe in tooth-fairies and ludicrous supply-side economics.

Then the Administration asserts that it will propose revenue neutral tax cuts with the revenue neutrality coming in part because the tax cuts stimulate growth! This is an elementary double count. You can’t use the growth benefits of tax cuts once to justify an optimistic baseline and then again to claim that the tax cuts do not cost revenue. At least you cannot do so in a world of logic.

The administration has already confirmed the mistake and say they will refine it later, they even said they did it on purpose. Not sure why the administration would be confirming something that isn't true especially when it makes them look bad.

Why do or would you believe them? Has one single promise ever made by this administration been completed?

Have we ever seen dts tax returns
Has dt ever fully divested from his income
Why is the Government Ethics office unable to get the information they need by the June 1st deadline to 'vet' his staff.

We were promised that all these things would be done in time. Well the time is well passed. No other administration in history has so callously floated the Laws and Constitution of the US.

Simply put - you imply that all these people are lying. Point one.

Point 2 - this is a loaded question and therefore a fallacy.

Nice post. Here is another way to explain it.

According to the Committee for a Responsible Federal Budget, for Trump's tax cuts to pay for themselves, the economy would have to grow at 4.5 percent over the next 10 years. That's two and a half times the growth rate projected by the Congressional Budget Office.

Grow the economy. There is no missed digits or faulty math. If the tax plan they propose is passed the numbers are correct.

and here is a Politico article that after the headline reads...

On paper, Mulvaney is right: under Trump’s plan, the government would have a $16 billion surplus by 2027; during the 10-year budget window, the annual deficit would average 1.4 percent of GDP, less than half its 2016 level. And the U.S. debt-to-GDP ratio—a measure of the country’s ability to pay its debt—would fall from 77 percent in 2018 to under 60 percent in 2027, according to White House figures.

Once the economy starts rolling, which it is, there will be a surplus.

Which proves you probably don't understand general budget accounting yourself.

It's all "GAAP" approved you know.

I think all you did here was take a general anti-Trump bandwagon fury and put a topic in a forum to attack.

I actually found in the linked Vanity Fair article on page 3, an explanation for where the error is. I tried to copy a paragraph from that article, but it seems their HTML is not Android-friendly. So I'll paraphrase.

The claim is that the $2T cuts in taxes will be offset by $2T in budget cuts, and then that the $2T is also assumed to balance the budget.

The error is in the claim, not the budget.

The budget is balanced dynamically, not statically. In other words, it does not assume a continuing GDP growth rate of 1.6%, which is what we have at present. It makes the assumption instead that the tax cuts, combined with simplification of taxes in general, will cause the economy to expand as it always has after a tax cut.

If we assume, as some are doing, that GDP growth will remain consistent, then we simply cannot continue without making even more extreme cuts in social programs, basically reverting to a pre-1929 policy of zero welfare for anyone. There's simply not enough money to go around as is, and we are rapidly running out of credit as well.

If we assume, as the budget proposal does, that tax rates will increase GDP growth as they have in the past, then there will be no $2T drop in revenue for the savings to go to. The savings from the new budget will go directly to reducing (and eliminating in 10 years) the deficit.

That is not an error; it is dynamic rather than static accounting. We can debate that all day long, but to say there's a glaring $2T math error in the numbers is intellectually dishonest.

I do not know what Trump's spokesmen said... I'd like to see a transcript of their statements. But I'm done satisfying my curiosity. The burden of research to prove me wrong via those statements is on someone else.

I agree. Again, I was using sarcasm when I called it that.

Sarcasm in text is difficult ... so how about a sign... 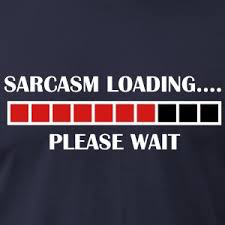 you can find it by googling 'sarcasm imgaes' - sorry I don't know how to send a copy direct.

Sounds like everyone else thats been running the national government. Trillions go missing on a regular basis around there. America gets duped again. #ssdd

Thank you for the explanation. I found it above... finally. The OP seems to be quite angry about something tonight.

The 'discrepency' is over the 'cost' of the tax cuts. Trump's budget doesn't directly calculate that. It calculates GDP based on 3% growth and taxation revenues based on a percentage of GDP. If the GDP grows at a rate of 3% (or better) and his tax plan produces the revenue percentage it is supposed to, the budget balances.

Will it attain 3% growth? I don't know, to be honest. My crystal ball is on the fritz right now. But I do expect a simpler, fairer, tax plan to be beneficial to the economy and boost GDP growth. I also know 3% was considered normal not all that many years ago.

Asking to see evidence of a claim is not a fallacy.

I think all you did here was take a general anti-Trump bandwagon fury and put a topic in a forum to attack.


I think you're right.

You know, I keep expecting Trump to actually slip up on something. I keep clicking these threads to see if this is it... if this is the time we find out Trump was lying to us all along. But they have thus far been false... "Look! Smoke! There's a fire!" Then I get there and find out the smoke is coming from a DNC projector.

They're building up my opinion of the man by trying so hard to take him down... we live in historic times.

I really do appreciate your post and look forward to reading them. You certainly know your stuff and provide me a learning experience of sorts.

I try to give reasoning behind my conclusions, because in the end we're all human (well, redneck is sorta human, I guess) and we all can make mistakes. Never trust anyone completely... including me. Ask to see their work.

posted on May, 24 2017 @ 11:29 PM
link
The video didn't really address this, I don't know what this is pertaining to. I would have to see the bill to see what the bill is trying to do. It's after midnight and I do not feel like sorting through a government bill, which is always full of BS and twisted loopholes and other mumble jumble. Maybe tomorrow after I get back from a free lunch at Sherman Williams, a free seminar on the use of natural herbs around here and their medical use, and a free Pizza from a card we purchased from the radio station, ten pizzas for twenty five bucks at some of the best pizza joints around here. Yeah, it is an advertising ploy, but a large Pizza for two and a half bucks is great.

I doubt if I will be reading it tomorrow. Is there a link to this proposal on the net somewhere?
edit on 24-5-2017 by rickymouse because: (no reason given)

How about a response of "where's the error?"

I'm not seeing it. Can you please point it out?

Did you even read the links in the OP?

The 'discrepency' is over the 'cost' of the tax cuts. Trump's budget doesn't directly calculate that. It calculates GDP based on 3% growth and taxation revenues based on a percentage of GDP. If the GDP grows at a rate of 3% (or better) and his tax plan produces the revenue percentage it is supposed to, the budget balances.

No, that's not right.

Using the 3% rate (which is much higher than EVERYONE's predictions) they're counting the same $2 trillion twice.

On the one hand, they're estimating that the tax cuts will be deficit neutral. I'm sure I don't have to explain what "deficit neutral" means to you but for other folks who may not be familiar, the idea here is that cutting taxes will spur growth and so while the tax rate is lower there will be more tax payers at the lower rate so it works out to be a net 0 change in tax revenue.

The exact verbiage is on page 13 of the proposal (right column, 2nd paragraph):

The Budget assumes deficit neutral tax re-form, which the Administration will work closely with the Congress to enact

To say that trickle-down nonsense is extremely optimistic would be an understatement but that's neither here nor there. The problem is that back on page 9, the proposal says this:

To help correct this and reach our budget goal in 10 years, the Budget includes $3.6 trillion in spending re-ductions over 10 years, the most ever proposed by any President in a Budget. By including the anticipated economic gains that will result from the President's fiscal, economic and regulatory policies, the deficit will be reduced by $5.6 tril-lion compared to the current fiscal path.

Do you see the problem now? They estimated an increase in tax revenue from growth to be $2 trillion which they apply to closing the deficit on page 9. Then on page 13 they say that growth resulting from the tax cuts will make them deficit neutral. And this is all in the hypothetical future where they estimate GDP growth YoY to reach 3% by 2022 and stay there through 2027.
edit on 2017-5-24 by theantediluvian because: (no reason given)


According to the Committee for a Responsible Federal Budget, for Trump's tax cuts to pay for themselves, the economy would have to grow at 4.5 percent over the next 10 years. That's two and a half times the growth rate projected by the Congressional Budget Office.

Oh, so for them to pay for themselves, they have to exceed the already overly optimistic expectations of the proposal by more than 100%? You do realize that the proposal assumes 3.0% growth not 4.5% right and that's up from 1.6%.

For you to say that makes it all work out is like saying that the proposal makes sense because... unicorns.

which brings up the question why is any president making a budget plan based on 10 years considering that a president can only serve for a maximum of 8 years?

as soon as he is gone whether it be 4 years from now or 8 years his plan will be replaced by the new guys plan.

proposing a 10 year plan when you and your plan may not even be here 5 years from now is kind of deceitful.