posted on May, 24 2017 @ 10:39 AM
link
May I begin by saying this: I know that many of us are sorely hurting right now and still reeling from the latest horror attack from another radicalized Islamic extremist and it is going to hurt maybe forever.

We have all lost our innocence somewhat and we seem to be facing a stark new reality.

That said, please ATS, allow me to offer a different perspective, one that is just as valid as any. Maybe we can smile through our tears and take this tragedy and make one small good out of it. Reach out to someone you would never have before. Go out today and help that older lady carry her groceries.. etc.. why not keep that light alive? 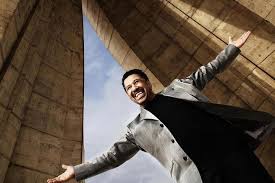 He is an Algerian born singer whose music and lyrics will brighten your day.
Born in 1960, Khaled's 1993 hit Didi (which he later performed at 2010 FIFA World Cup) made him an international star.
His song Alech Taadi featured in the The Fifth Element.
In fact, who am I fooling.. you probably know who Khaled is!

Here is a great article which covers the story of Khaled's youth in Algeria and later decision to move to France:
foreignpolicy.com...

Please enjoy his songs in the spirit of unity, understanding, and peace. Thanks friends.

As if I did not exist,
she passed me by,
Without a glance,
Queen of Saba. I said:
" Aïcha, take: all is for you."
Here the pearls, jewels,
Therefore gold around your neck,
the quite ripe fruits with the honey taste,
My life, Aïcha, if you love me.
I will go where your breath carries out us
In the ebony and ivory countries.
I will erase your tears, your sorrows.
Nothing is too beautiful for so beautiful.

I will say the words of the poems.
I will play the musics of the sky.
I will take the rays of the sun to light your eyes of queen.

It said: " Keep your treasures.
Me, I want better than all that,
Of the strong bars,
the bars even out of gold.
I want the same rights as you
And of the respect for each day.
Me, I want only love."
Aaaah! As if I did not exist,
she passed me by,
Without a glance, Queen of Sheba. I said:
" Aïcha, take: all is for you."

You can't help but love every person in this video!

I really enjoyed the second video, thanks for sharing as always.