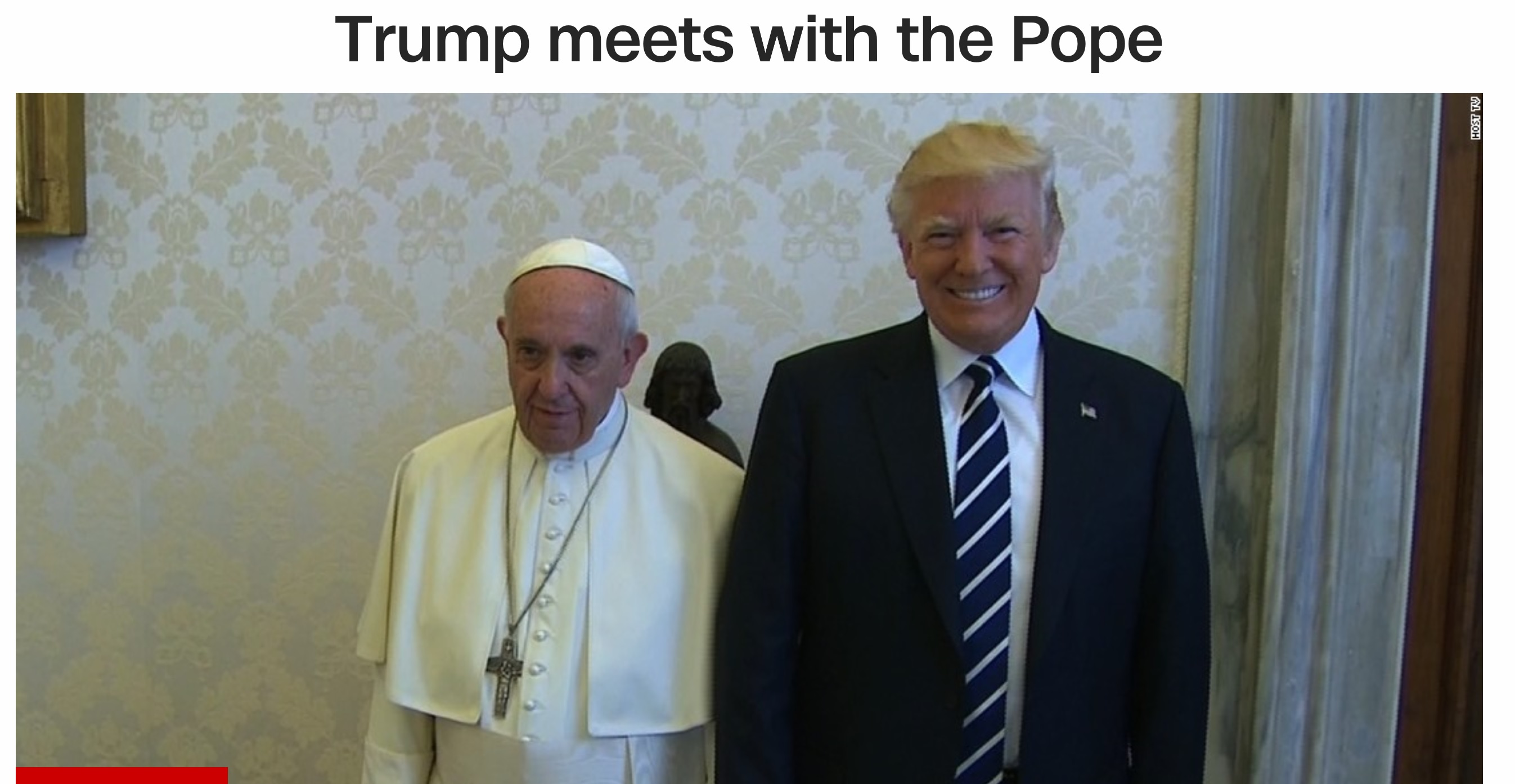 (CNN)After meeting with Muslim leaders in Saudi Arabia and visiting sacred sites in Jerusalem, President Donald Trump's tour of world religions concluded Wednesday at the Vatican, the Catholic Church's holy headquarters.
There, at the Apostolic Palace, Trump met with Pope Francis -- finally.
It's a meeting millions have been waiting for, an encounter between two of the world's most intriguing and complex characters:

Isn't that the funniest photo?

Can't quite put my finger on why that is at the moment, but will come back and share my take on it's irony and absurdity, at the expense of both gentlemen in the photo.

What are your thoughts, and what is it precisely that Trump is getting out of this meeting other than a photo op?

The pope met with god?

Nice to know the Pope is sinking to new lows. He's gonna have to bathe in Holy Water to was the stench off.

Why isn't the Pope wearing his pointy hat?

because hes not pontificating. Hes showing his guest around the fortress.

There really really old and there organs dont work so well.

Popes gonna try to con Trump into staying in the Paris Agreement.

originally posted by: Lucidparadox
Let's be real.. the pope doesn't look too happy to see him

Nope. Not happy at all. Trump meanwhile is putting on his best smile, while completely ignoring the presence of the other person, who's turning away with a grimace.

This however doesn't express the love of Jesus Christ on the part of the Pope, and neither does it reveal Trump to be a devout Catholic.

Aye, this one tells words going off on different tangents.

To the contrary. The gospel of Jesus Christ is of incalculable value, and if it weren't meant to make a person happy, then what was the point?

The love of the Lord is the joy of the Lord and it will shine from within no matter how old a person is.

He looks a little better than his predecessor though I must say.

I don't see the mirthfulness in the Pope that one would expect, and in this case, it appears that Trump stole it from him!

Very interesting and ironic photo, from a whole host of perspectives.

What it shows is the narcissism of Donald Trump and a dour piety on the part of Pope Francis, mixed with disdain and disgust, and thus a lack of unconditional love and a spirit of forgiveness.

It's very funny and by this I don't mean to disparage or demean either person. Just observing.

still mabey the pope has a tummy bug are he just looks unhappy because of the light.

Do you think when the pope things of the bible hes mostly tending to think of the gospel of J.C. more than the other bits? Theirs an awful lot of bible to keep in mind if your thinking about the whole book.

The whole Book is about the often painful struggle of a divine romance. It ends very nicely (said like Donald Trump, who claims it as his favorite book he's never read).


The Pope is the Anti Christ! I can prove it because a very reliable UNKNOWN source told me!

He's doing better than I would next to Trump.

posted on May, 24 2017 @ 02:55 AM
link
When they did their gift exchange, Francis did reference "the joy of the Gospel" and for a moment smiled and took on a happy face, for a moment.

Trump thanked him politely, without any real comprehension.

What the photo shows is only that he's a man, somewhere in between, like the rest of us.

He is old and somewhat obese, out of all fairness.

Trump and the Pope in that photo? That's just precious. Someone should get a prize for that photograph whoever took it.