posted on May, 24 2017 @ 12:21 PM
link
Obama, the man who put together the biggest spying operation on his own citizens in history - bigger than even the Nazi SS. 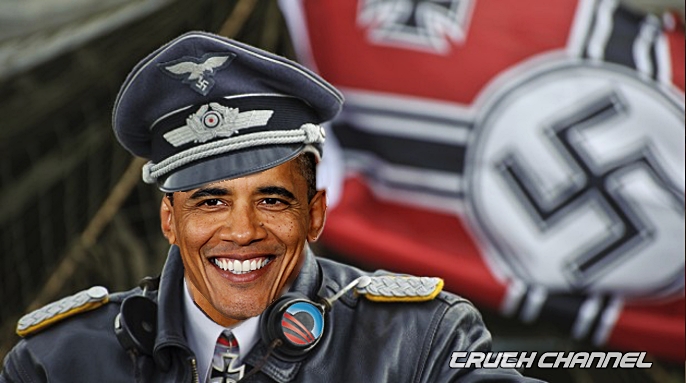 I knew he was an empty chair all along, knew the fix was in, knew not even bother to vote for 8 years. 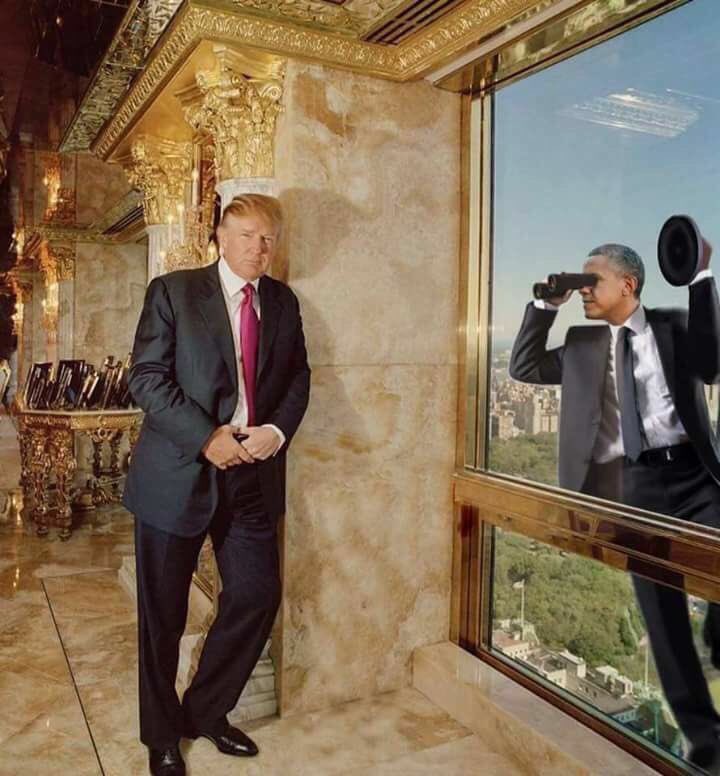 Of course it's true. I know someone personally who saw problems, as a result of his postings on various social media, etc, against O. Hillary's not the only one that needs to be locked up.

posted on May, 24 2017 @ 05:07 PM
link
Complete abuse of power by the worst President ever. Lock the asshole up and throw away the key. Then lock up everyone that fell in line to allow this.

Cant see why this is news considering there is simply no anonymity to be had in the information age in which we exist.

Governments and there leaders have been spying on there own people since time immemorial, that's a fact.
edit on 24-5-2017 by andy06shake because: (no reason given)

Cant see why this is news considering there is simply no anonymity to be had in the information age in which we exist.

Governments and there leaders have been spying on there own people since time immemorial, that a fact.


So! If it is illegal and Obama was caught, hang the jackass from a tree and be done with it. Just make sure there are enough branches to hold Hillary, Lynch and Comey too. Podesta, Pelosi, Schumer, etc.

You could just have said hang all politicians from a tree, because end of the day they are all bastards, in it for themselves, with little regard for the needs and wishes of the everyday common Man, generally with there own agenda to satisfy.
edit on 24-5-2017 by andy06shake because: (no reason given)


If it is illegal he should most certainly be made an example of. I think a special counsel is required to get to the bottom of this.

posted on May, 24 2017 @ 07:45 PM
link
Isn't it interesting how this report is based on a FISA court document verses a reporter's account of a select portion of a memo read to him over the phone. The memo has still not been revealed publicly.

This is just the first page but how cool to see a (formerly) Top Secret document. You can look at all 99 PGs of the order by following the above link. 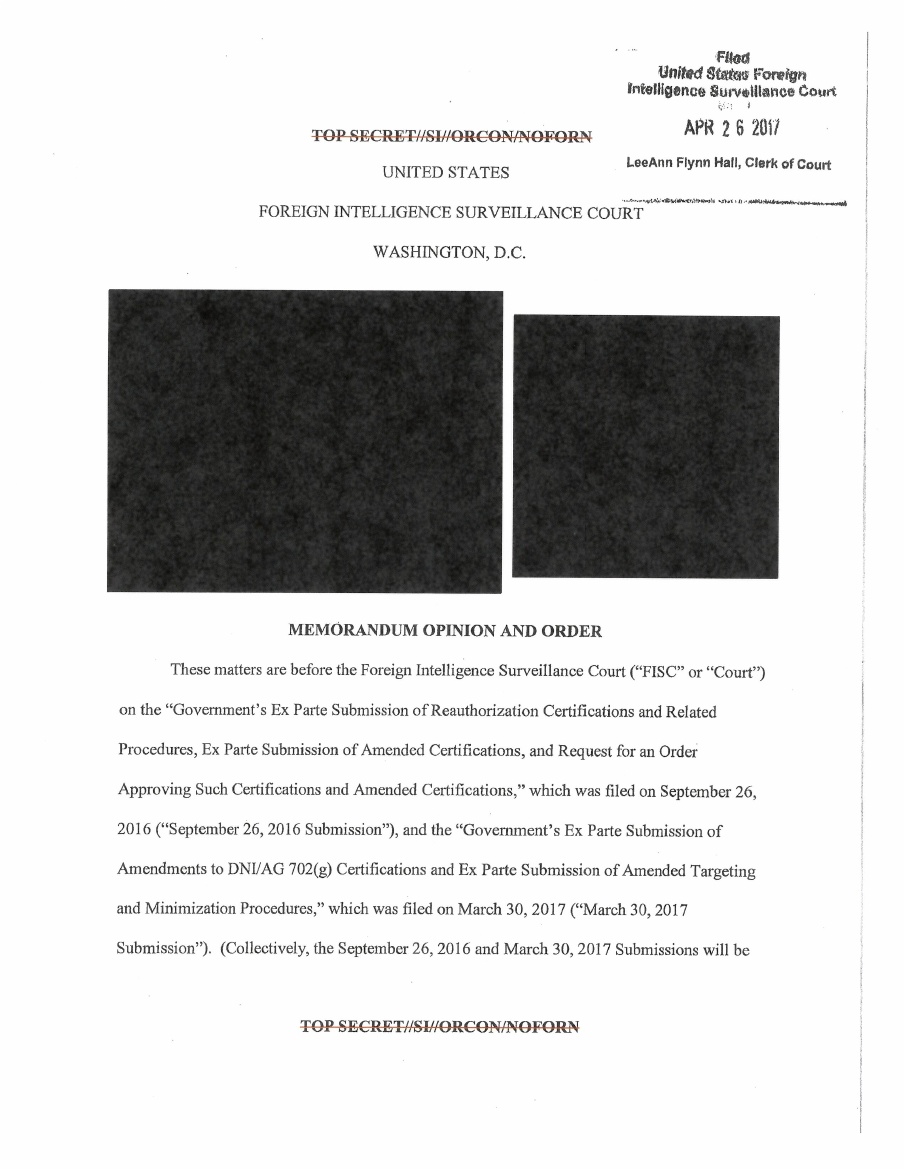 If it is illegal he should most certainly be made an example of. I think a special counsel is required to get to the bottom of this.

I agree and in this case the special counsel would have the advantage of having actual evidence of a real crime to follow.
edit on 24-5-2017 by whywhynot because: (no reason given)

So funny how The Left accuses the Right of Nazi tendencies to cover their own transgressions.


Yep,,almost predictable,
I don't think I've ever seen such an disconnect!


The American Civil Liberties Union said the newly disclosed violations are some of the most serious to ever be documented and strongly call into question the U.S. intelligence community’s ability to police itself and safeguard American’s privacy as guaranteed by the Constitution’s Fourth Amendment protections against unlawful search and seizure.


Go figure, you give a agency a ton of power then are surprised when they use it.

Saturn, Kudo's to you. You had the integrity to come on here and make a decent statement unlike the ones that traditionally make excuses for the criminals in the political realm of D...Where are they now? '.... Their silence is deafening and we all know who they are by now. Shame on them for defending this criminal cabal!!!!!!!
edit on 24-5-2017 by Justoneman because: (no reason given)

It most certainly would. It's called a mistrial.

Dun, Dun, Durrr! New to ATS? Just thought I'd ask because most members know all American governments from as way back as the 80's and further have been spying on their citizenry.

posted on May, 25 2017 @ 08:23 AM
link
This absolutely pisses me off, but it's not surprising, because this type of data collection from the NSA has been known to be happening for years, now. What does surprise me is that we actually have proof and people openly discussing it.

But I find the placating BS coming from the NSA to be so fundamentally reliant on Americans being stupid that it's almost laughable--from the Circa article:


The NSA said it also plans to “delete the vast majority of its upstream internet data to further protect the privacy of U.S. person communications.”

Agency officials called the violations “inadvertent compliance lapses.” But the court and IG documents suggest the NSA had not developed a technological way to comply with the rules they had submitted to the court in 2011.


Anyone "in the know" concerning government data is that it takes many, MANY steps to truly delete digital data--there are so many back ups of back ups that it will be nearly impossible to truly delete a "vase majority" of anything, and they know this.

Also, calling this data collection "inadvertent compliance lapses" is a total truckload of horsesh*t. It's not inadvertent, and it's not a lapse in anything--we all know that these laws and guidelines are just there to ease concerns of the general public, but that they don't truly get followed if an executive-level employee snaps their fingers.

I'm so goddam tired of the government double-speak, but you know what, we'll just have to sit here, get outraged, and then twiddle our thumbs while nothing happens to these people.

It literally makes me want to scream out of frustration...

originally posted by: JoshuaCox
I just read the article and even it doesn't claim there was anything illegal...

The article says Obama MAY HAVE not followed guidelines HE put in place..

Maybe I'm wrong, but I'm betting breaking guidelines is not breaking the law...

Well, it is if the guidelines are to keep things in line with constitutional amendments, like the 4th Amendment. Guideline or not, if he is willingly and knowingly allowing his administration to disregard the rights of Americans, yes, that's called breaking the law, superficial guidelines or not.


This is a very blantant attempt to discredit the Russian conspiracy, or maybe is setting up a legal defense if a tape surfaces proving said conspiracy..


Already starting with that BS line of discussion, huh? Okay, then...

Honestly, assuming the worst case scenerio of trump being guilty.. how the evidence was gotten wouldn't change the charge...


Honestly, you know nothing about how evidence collection methods can affect a trial, do you? What exactly is your expertise in the legal field?

But I would bet money trump does jack to fix it..


Fix it or not, Obama did nothing about it, either--well, expanded it, and then abused it, but that's not convenient to note, is it?

It must just be all about a diversion against the failing Russia-collusion narrative.

Rrriiiiiiiiiiggghhhhht. (must be read in Dr. Evil's voice for full sarcastic effect)

1) My legal experience is mainly from me being a hell raiser as a kid.. mostly from the wrong side of the DA's desk, lol.. so really it is first hand experience as I have spent quite a few weekends in county jail.. seem bunches of disclosures and such..

What is yours "slapmonkey"?? Lol..

2) I'm pretty sure a guideline is not a law.. a law requires being passed by congress and the senate, then signed by the president..

I don't think the president alone can make laws with criminal penalties solo..

3) this wasn't even a good attempt not to be correlated with Russia.. nearly everything trump and conservative media has done has been to distract from Russia, weather he is guilty or not.. they all want the story to go away.

This story never even surfaces if not for Russia..

I'm pretty sure a law carrying criminal penalty has to pass through congress and such..

I'm pretty sure presidential guidelines do not carry criminal penalties.. for those you need a law.


Expanded by a democrat president with the backing of the republican led house and senate..

The right wing stance is that the patriot act is a good idea.. the left wing stance (not obamas personal actions..) has always been against it.

Still to this day, your average conservative would agree with it, while your average liberal thinks it is horrible..