The sad part is you can look at very recent history to learn this approach of "keep carrying on as before" doesn't work. There was a very similar attitude in the US during the 90s, although we didn't have direct attacks on our soil. But these same arguments were going down between the balance of security vs privacy. Then 9/11 happened and we realized all the people who said we had that balance wrong weren't just fearmongering Muslim haters, they had a point. Unfortunately people forget rather quickly and 16 years later we're having those same arguments here like 9/11 never happened.

Yeah, lot of vested interests skewing that debate over the years.


The bit that gets me, is that with every year of relative inaction, more and more people shift further to the right and the sanctimonious left just can't see what's happening.

originally posted by: GreenGunther
911 and Pearl Harbour were false flags..

Er, no they were not. But that's another topic.

On topic and to further the current strand of discussion...

I think the UK has the right balance of security powers. I don't want more intrusive surveillance, nor do I want people arbitrarily detained. We are not China, or Russia. However, I think citizenship is given away too easily and that is one area I would hope Brexit improves.

No sorry, no idea what that might mean.
Probably a general thing.

The bombers brother had been arrested in Tripoli. 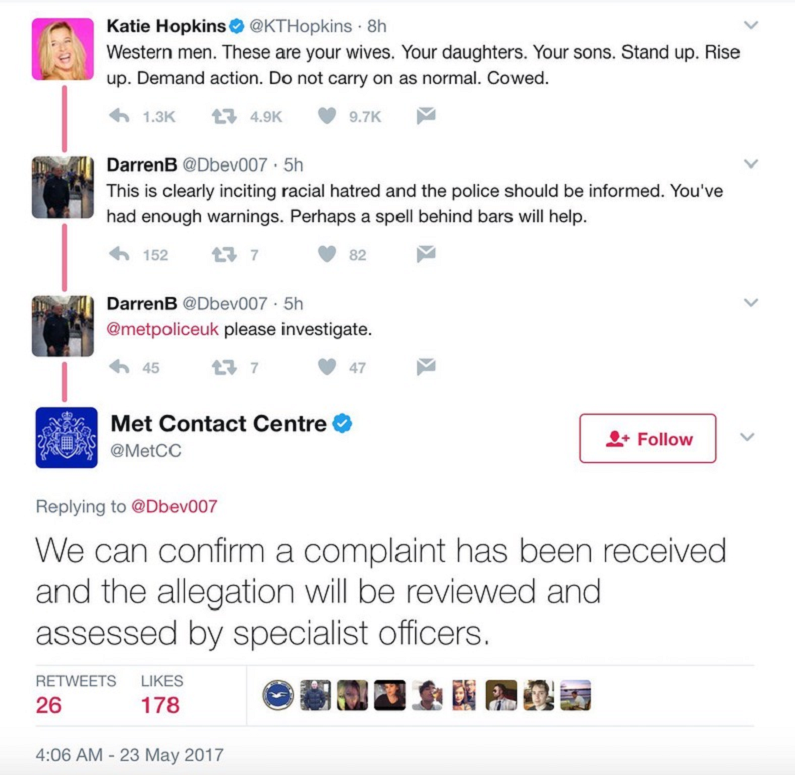 
Looks like this do-gooder clown had a bit of instant-karma visited upon him.

originally posted by: scubagravy
Gotta love the people of England.

originally posted by: Kali74
a reply to: crazyewok

The vast majority of Muslims are peaceful people just trying to live their lives like everyone else.

And not all bald white tattooed preferring white culture and white company are satanic nazi worshippers... they want to live in peace, go to work and Church, to raise healthy happy families, fall in, love, laugh, and enjoy their lives too.

So so sorry to hear of this terrible tragedy. I held back coming on to read members comments until all the one side or the other speculations were exhausted by truth and reality. Used to be, I would LOVE to come here at the first word of anything globally as I could COUNT on eyewitness and emergency reports by boots on the ground, rhetoric- less real time reporting... Threads like these are not the place to make stupid comments based in ignorance. There are or were members who would actually check here when news broke to get emergency information, connect with truth and report out to other websites and blogs because what was written here could be shared and trusted.
edit on am531amWed, 24 May 2017 11:40:24 -0500 by antar because: (no reason given)

posted on May, 24 2017 @ 11:41 AM
link
Can somebody explain this one to me please, as reported on Sky News. "Hashem Albedi, younger brother of the Manchester bomber has been arrested by counter-terrorism police in TRIPOLI" That's in Libya and I thought we were out of there and the country is a complete shambles!
Talk about finding a needle in a hay stack and so quickly! They probably tracked his phone or something, but flippin' heck!

Thank you for the knowledge. First time for me this has been advised.

So people quoting the times its ok to kill, lie, cheat those against the faith are out of context or fake?

could have been arrested by Libyan intelligence??

Yes...probably tracked his phone. But not this week.

It was probably months, maybe years ago, judging by the way things usually go.

I know Infowars is kind of frowned upon here but they've just shown some tweets saying that someone had reported the bomber months ago for suspicious activities. No one investigated him.

But I'd wait and see. Only just switched Infowars on so they might elaborate in a bit.

See if anywhere else is saying the same.

From what I have been 'told' in all likely hood it was the SAS, and at the arrest this morning. They aren't messing about or taking chances that's for sure!

Here’s what we know on Wednesday, May 24: —Ian Hopkins, the Manchester police chief, says authorities are investigating a network responsible for Monday’s attack at the Manchester Arena. Earlier, Home Secretary Amber Rudd said the attacker, Salman Abedi, was “likely” not acting alone. —The U.K. raised its terror-alert level to critical—the highest possible level—for the first time in more than a decade. —ISIS claimed responsibility for the attack that killed 22 people and wounded 64 others following an Ariana Grande concert. The extent of the group’s role in the attack is unclear. —This is a developing story

Seems that way, unfortunately too much info was leaked to the US and hit our media when UK didn't want info out. They've arrested five people, hopefully they can still get them all.
edit on 5/24/2017 by Kali74 because: (no reason given)

originally posted by: crazyewok
Ok let me get this straight......

This is a very good point.

Already starting to sound like a intelligence failure. It will be interesting to see what comes out of all of this.

originally posted by: crazyewok
Ok let me get this straight......