But it can be joined and that is what you're suggesting.

How do you destroy evil by choosing to become evil??


That doesn't work to fight terrorism you need to do two things. One cut off the source of funding they can't recruit or support terrorism without money. The other thing is to track down and remove their leaders

Assuming you are white --
Are you responsible for the Holocaust during WW2?

Strawman
ideology is being discussed here, not traits
people are born white
people choose to be islamic

it would be better to liken it to if (s)he was a nazi would they be responsible for the holocast (even then, its mostly no..most were just typical soldiers for the Reich)

Also a good point. This is what I call discussion.

Not one video shows anything of substance other than some people panicking after a noise was heard. Weird.


Maybe not. A young teen committed suicide in my area last week. Outside of the school sending a telephone and text notice to the parents of the children that attended that school, no other information was presented on the event.

Not one mention in the news, on the internet, or even on social media. The school, media, and law enforcement are down playing situations like suicide to stop giving the attention and focus on the act itself, and spending the attention on identifying and getting help for the children that may be in need of support.

Providing the terrorist a soap box isn't going to help the problem. Identifying and eliminating them is a better solution.

killing terrorist? im good with.
killing their families? You are ok with family members being killed solely based on guilt by association?
Destroying their villages?

Not a strawman argument...

Guilt by association is not acceptable and as I pointed out the exact same argument can be made in reverse.


Providing the terrorist a soap box isn't going to help the problem. Identifying and eliminating them is a better solution.


In the conflict that began in Chechnya and has since metastasized into a loosely organized Islamic rebellion throughout the Caucasus region, Russian security services routinely arrest, torture and kill relatives, rights groups say.

The Russian approach, enough to make supporters of waterboarding wince, has by some accounts been grimly effective. Abductions of family members unwound the rebel leadership in Chechnya, for example.


Perhaps we can learn alot from Russia

You sure about that? It didnt seem to stop terror attacks in Russia.

Yes it was. You just disagree.

Stop with the petty jabs and continue with your argument. I gave you kudos for the discussion, keep THAT up.

Who knows how many more attacks without that tactic? And it did break the Checnyan leadership

killing terrorist? im good with.
killing their families? You are ok with family members being killed solely based on guilt by association?
Destroying their villages?

Not a strawman argument...

Guilt by association is not acceptable and as I pointed out the exact same argument can be made in reverse.

Lets deal with the last 30 years though. nazi's aren't a thing anymore (regardless of what hysterical tumblrinas demand). Apartheid is over, slavery still exists in india, china, some parts of russia, middle east, and africa..but not in the west.
The relevant discussion then on what a person can join in free will is a religion
islam, christianity, judism.
This is a choice. nobody is born a muslim, a christian, a jew (religion).

As far as the rest of the stuff you were writing about...killing familys and stuff. not sure if I am following.
It could be a interesting topic though, but perhaps too deep for this thread. its a bit off topic.

Killing families and stuff was from the poster I responded to. He was advocating killing terrorists, the families of terrorists and leveling the towns where terrorist reside / came from.

Hence my point - guilt by association is a double edged sword.

I think this discussion is ON topic. Threads like this are often taken in this direction..... because events like this LEAD to discussions like the one being had with you and Xcath. It's NOT off topic, geeze. It's nice to see a discussion for once.

originally posted by: Violater1
To our very close allies, I'm so very sorry for your loss.
19 girls slaughtered and over 50 injured.
What will the British do? We will soon see.
I'm sure we have 5 or 6 MOAB's that could be delivered to the RAF.
Once they figure out that it was Iran supported, I'm sure Tehran
would be an excellent target.
The only way to deal with these muslims is to bring destruction on a MASSIVE scale.
BTW, I''ll be happy to send them 20 gallons of beacon grease to place inside the MOABs.
And no, I don't hate them, no more than a rapid dog. You just have to put it down.
Peace through superior firepower.

Have you ever been there?

Where tf do you get your weed because DAMN, bro, you must be ripped.

posted on May, 23 2017 @ 12:52 AM
link
Well the absolute WORST thing would be if any anti Muslim backlash came from this. I mean, THATS what's important here right?
Those poor muslims who follow the book of peace may face some sort of discrimination for their hateful, intolerant, homophobic, misogynist beliefs. We need to ensure this doesn't happen, maybe we should import MORE muslims into ALL non muslim societies. That will show them we love Islam and will GUARANTEE 100% to stop any future attacks, GUARANTEED!!!

originally posted by: SaturnFX
At least now there will be a serious discussion about this and some real work done to safeguard the western homelands. 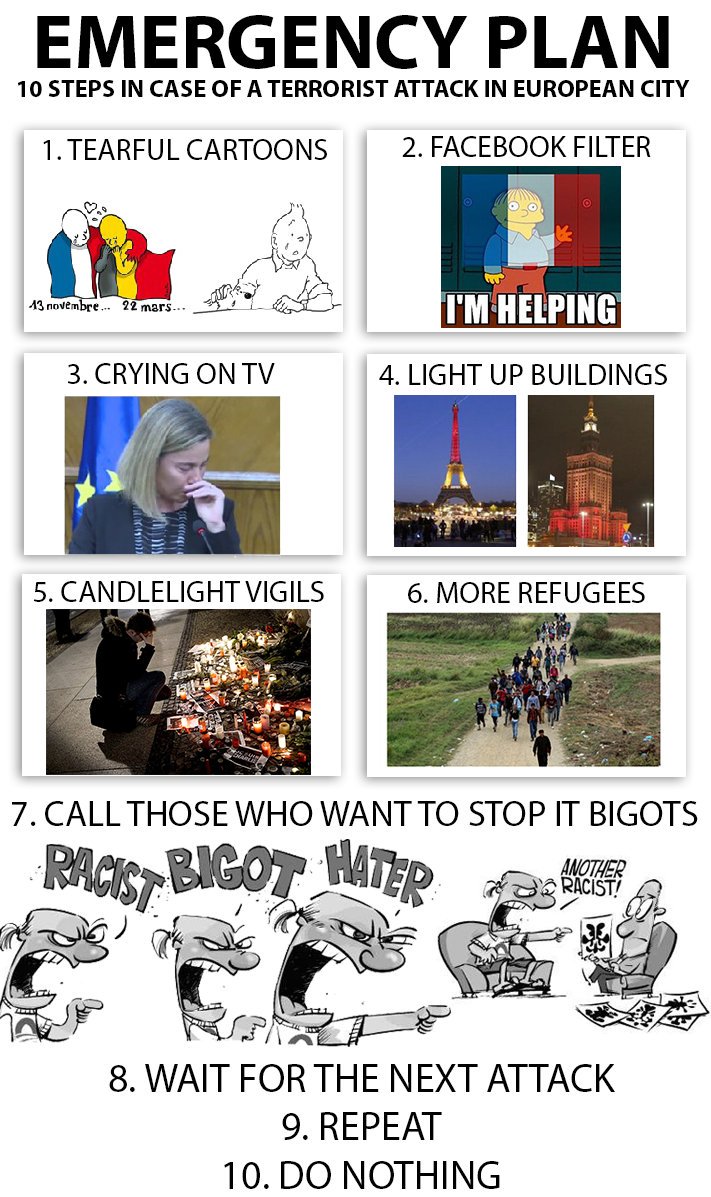 Thank-you for sharing that flowchart of how nauseatingly predictable the reaction to these terrorist attacks have become in Europe.

Eventually, some countries will break that cycle by implementing the CareWeMust solution. Terrorist attacks will (likely) become few and far between in those nations.