Are there Caverns/Caves on the MOON, MARS & VENUS?

If so why are not these areas being explored more for life or evidence of life with technologies seen in video below? Or other technologies.

These can be attached to rover/landers with cameras and microphones and sent inside.

posted on May, 22 2017 @ 09:21 AM
link
It just seems odd there are seldom if any public shares of interior caves of at least the Moon & Mars. Venus 1 can accept at certain times of Venus year would be extremely risky or challenging.
But Mars, the Moon and Venus have caves right?

So can any explain why there are no images or at least close ups of caverns/caves or the entrances to them?

I think one of the reasons is weight, the more weight the more expensive and fragile for the rocket and payload, maybe in the future if not man is sent first.

posted on May, 22 2017 @ 09:31 AM
link
a reply to: Mianeye
Ok 1 can consider that but there has to be lighter materials or even micro bots that can explore and then align the communication/data path to send images up to lander/rovers.
Also if life exist within them it may be wise to survey them before sending humans there. Other then special Blaq ops teams prepared for whatever may be there within them.
Thanks Mianeye had not considered that.

originally posted by: Ophiuchus 13
So can any explain why there are no images or at least close ups of caverns/caves or the entrances to them?

There are caves on Earth but you can cover a lot of territory without seeing any cave entrances. Likewise I'm sure there are caves and caverns on the moon and mars but that doesn't mean entrances are easy to find.

Even if a cave entrance was found, going inside the cave would block the radio signal to the rover so there's no way they would send a rover in only to lose contact with it.

Many of the lunar caverns are thought to be hollow lava tubes where lava once flowed, and may be completely underground, without any obvious entrance. Those have been mentioned as possible locations for an underground lunar base in the future. Mars may also have lava tubes.

posted on May, 22 2017 @ 09:41 AM
link
It would seem the liquids and or microbal life of some type that could support alien life would settle down within the cave lower regions.
Astral-RV scans some types of streams cannot clarify if water however.

@Even if a cave entrance was found, going inside the cave would block the radio signal to the rover so there's no way they would send a rover in only to lose contact with it.

That is why I mentioned using micro bots that align themselves in a way that they could transfer the communication or image data up to receiver rover/lander. They then keep consistent line of communication between bots inside caverns/caves to outside receiving rover-lander with micro antenna arrays...

As far as I understand it, NASA has discovered caves on the Moon, which they have speculated could house astronauts in the event of a Moonbase or staging post being developed there, so they are looking into that with some interest at the moment. I think the main reason we have sent no rovers there for some time, is basically because we have orbiters which have recorded data using gravity mapping techniques, which show cave structures in pretty fine detail, fine enough for the moment at any rate.

When some significant planning has already been undertaken to prepare for a possible Moonbase construction effort, I would imagine that it will be considered worth while to send robots very similar to those you highlighted, to look into whatever caves are present in more detail, establish the parameters of the environment within.

As for Mars, there are almost certainly caves on Mars generally, but during a flyby of the planet the Mars Reconnaissance Orbiter caught a shot of a "cave skylight", which is basically a lava tube which has penetrated upward, to the surface. Filled in with dust from the surface (blown there by the surprisingly weak, but none the less massive sandstorms which blast across the planet from time to time), the area they took a picture of is just one of COUNTLESS lava tube formations thought to be present just under the surface of the Red Planet. However, getting into intact lava tubes, which do NOT have such a thick coating of dust, will require a robot that can drill through and load itself into, these tubes. This, on its own, would be quite tricky. But you also have to contend with the fact that if these robotic drones are going to go sub surface, they may very well drop contact with Earth. The radiation bathed surface of Mars, would probably interfere with communications gear on board, making steering and control of the drone more generally, a great deal more difficult than it would be otherwise. Given how hard it is to control a drone on the surface, I can only imagine that this would be the devils own job for an underground investigation.

The difficulties presented thereby are all the more frustrating, because although scientists are pretty sure that the Martian surface will prove to be as lifeless as they have thought for a long time, the subsurface may very well prove to be entirely different in aspect, because it is protected from the worst of the radiation being thrown at the planets surface, and has the other advantage of being closer to any liquid water sequestered underground, than the surface is. These two things in tandem may be enough for some kind of life to flourish.

As to Venus, things are trickier there. Every object we have sent there has been corroded to ruin by acidic rain, melted by enormous temperatures, and stomped flat against the planets surface by the staggering surface pressure of the most innocuous looking, yet inhospitable location in our Solar System. Electronics hold up particularly badly in the environment present on Venus, however, there ARE projects being thought up, which MIGHT have an answer to that series of environmental barriers. For example, there is one idea being batted around at the moment, involving a fully mechanical computer, driven by some kind of wind turbine, which would be built into and onto a lander for Venus. This lander would feature two main components, connected by a cable. One would be the lander itself, which would be fitted with the mechanical computer, a communications array involving a radar capturing unit on a piston, and the turbine for power production. The other would be the mobile element of the lander, which would be attached to it via a cable of some sort. Its job would be to somehow make it from the lander, to the edge of some kind of cave, and then descend into the planet, using the cable to anchor itself. The radar on a piston arrangement, would be used to communicate with the orbiter in a kind of morse code like language, which would then send data back to Earth...

This would not be a situation which in any way resembles the situation we had with the Mars rovers of late, which have been uniformly impressive in their longevity and performance. The rovers sent to Venus would have a life span far shorter, and functionality many times more limited, than those sent to Mars, precisely because the hostility of the environment on Venus, requires a simplicity and solidarity of mechanism which might well render the entire effort somewhat pointless. For all that it would be an impressive feat, nothing that could survive the Venusian environment for very long, will be sufficiently sophisticated to record more than a few, basic data points, and the time it will take to convey findings to the orbiter will be much longer than the communications periods involved in the Mars missions.

All in all, it might simply not be worth it yet, for the amount of data one could ever hope to recover.

Maybe locate the area of interest drop in some laser drilling bots to drill down to cavern depths, then place wire antenna in the holes that then can be used to communicate between subsurface and surface.

a reply to: Ophiuchus 13

why are not these caverns being explored with new technologies...


You would need a Balrog Ops Team, and even then their technology would be useless...


or Advanced ground penetration radar that can some what detect life that scans deeper from space or from beneath rover/lander.

Cave and caverns are created from water, wind, and magma.

Venus is hot with an ever changing landscape of magma.

Mars at one point had volcanic activity and water

The moon, had a very hot birth so those formations were created as she cooled down.

I bet every rocky planet and moons have those formations.

Very silly question even if it was rhetorical.
edit on 22-5-2017 by ConscienceZombie because: silly little typos

originally posted by: TrueBrit
a reply to: Ophiuchus 13

As far as I understand it, NASA has discovered caves on the Moon, which they have speculated could house astronauts in the event of a Moonbase or staging post being developed there, so they are looking into that with some interest at the moment. I think the main reason we have sent no rovers there for some time, is basically because we have orbiters which have recorded data using gravity mapping techniques, which show cave structures in pretty fine detail, fine enough for the moment at any rate.

An article on those caves

posted on May, 22 2017 @ 01:23 PM
link
There are caves on the Moon. The theory is that there were lava tubes that drained naturally in the distant past, leaving behind holes and tunnels. There are project to use reflected laser light to see inside caves without having to enter them:

why are not these caverns being explored with new technologies...


You would need a Balrog Ops Team, and even then their technology would be useless...


Hopefully there aren't any Balrogs on Mars or Venus. Lol

I bet every rocky planet and moons have those formations.

Very silly question even if it was rhetorical. 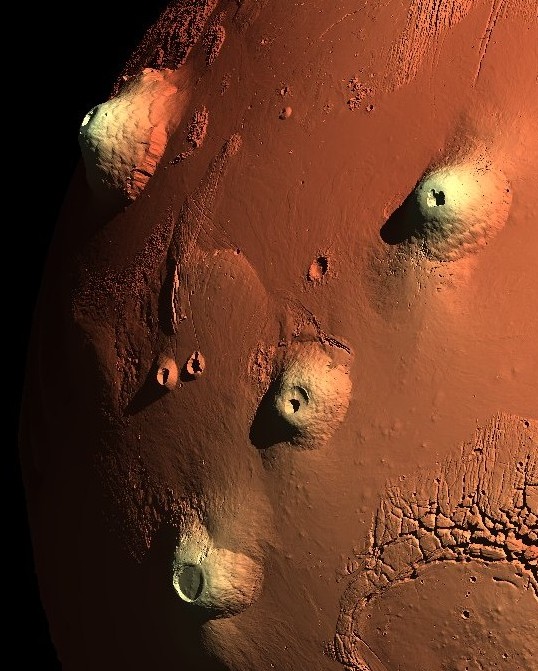 Area that attracts the attention of 1, for example.

Not sure if there exist caverns/caves-tubes below the surface connecting the Ascracus, Pavonis, Arsia Mons and Olympus Mons area, seems possible however...
edit on 5/22/17 by Ophiuchus 13 because: (no reason given)

The answer is yes to all three, and they usually seem to be collapsed lava tubes or cavities.

Venus still has active vulcanism, by the way.