I'm just taken with how straight the line is.

The only geomorphological basis I can come up with is extreme weathering of a multi-crystalline rock formation: say something volcanic inside, say, some sandstone. But even if this were the case it wouldn't explain the regularity of the line. But I'm no expert.

So, it"s an 'artifact' in my opinion. Could be a real thing sitting down there deserving specific exploration, or it could be a hoax.

By the folks at Google Earth?

A couple I found the one looks like a Big Meteorite hit - The other is just plain weird. 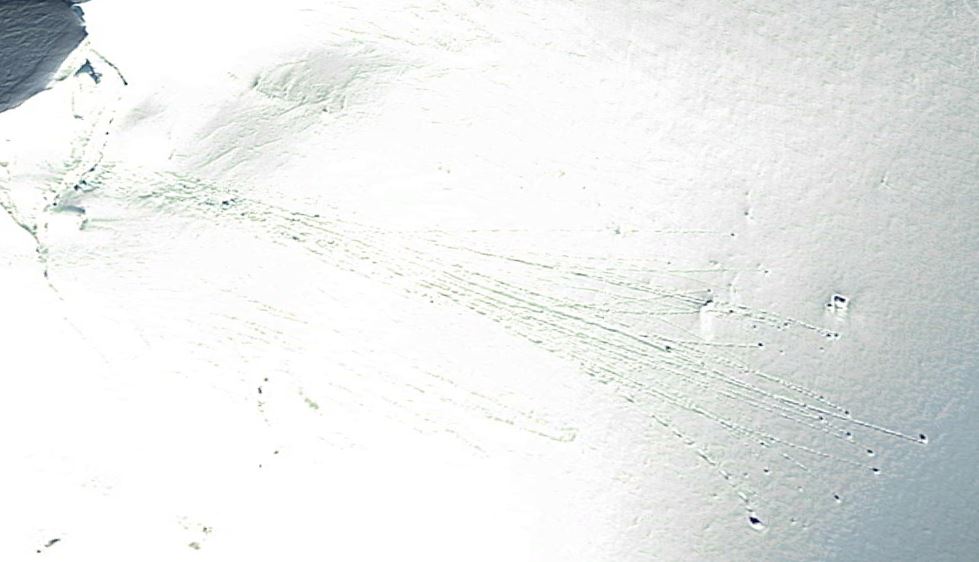 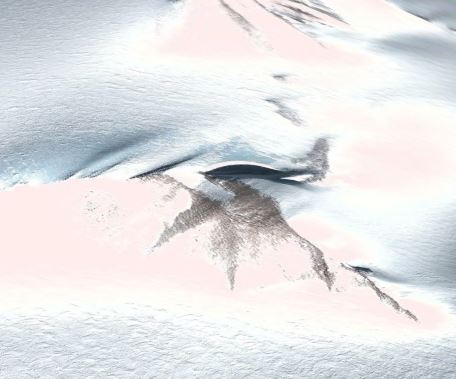 wow report that first one to an geological society! thats clearly an meteorite impact and due to the rocks still being there its unknow

I did write down the cords Left them at work - It's got to be huge I'm kinda wondering about the scale of it.

If it were the other way around, a feature of the same size greyed out, we may think 'conspiracy' or some such.

I think it unlikely, but then again a row of dead straight 50' high standing stones in the frozen wastes doesn't crop up that often either!

Good find all the same though.

But have you seen the pictures of caves and other anomalies there?

I called GSA and got Yea no we don't follow up on things of that sort ? 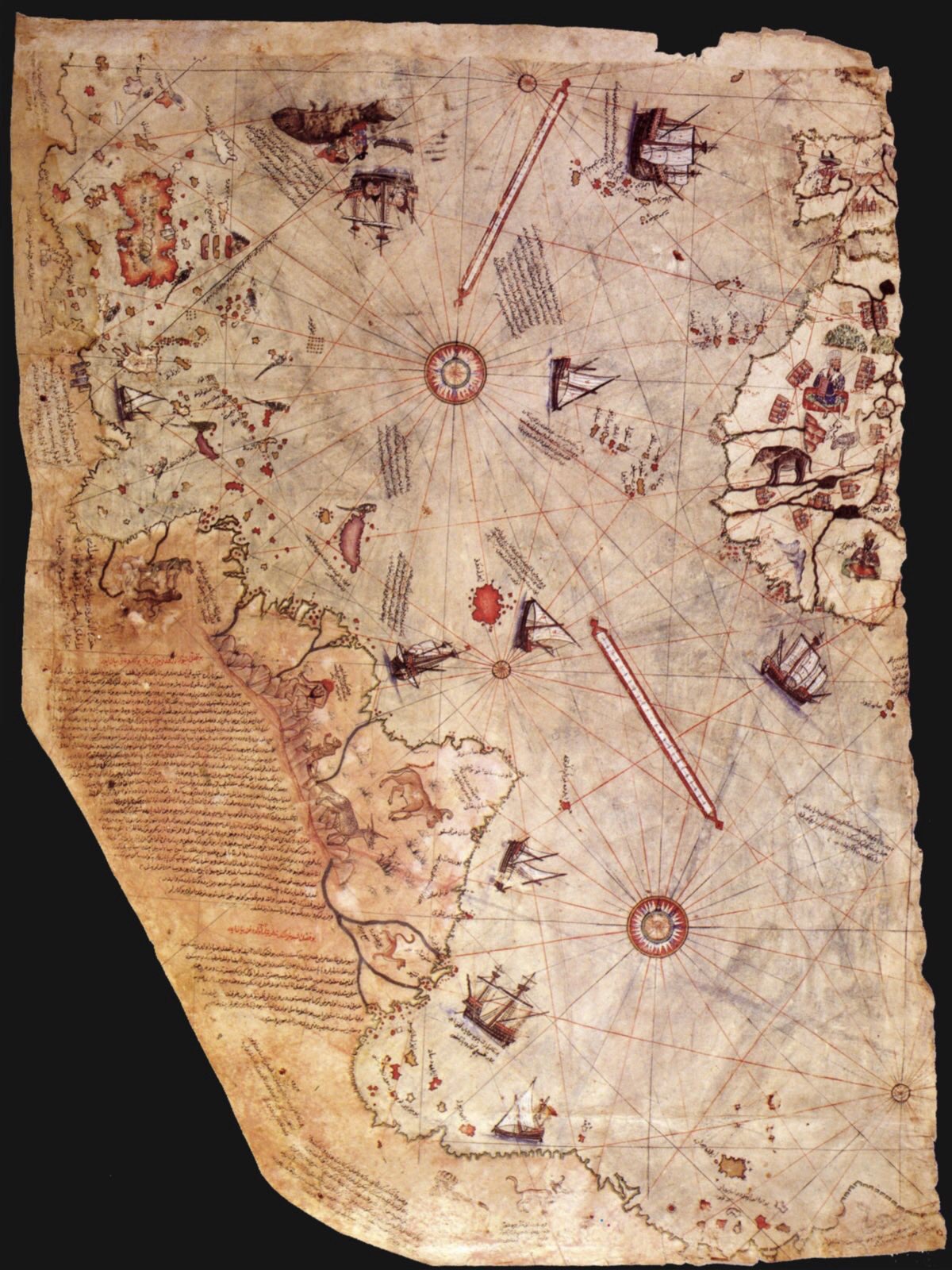 yup you definitelly is onto something

That second picture is a strange one. Looks like a curved structure [roof?] and is casting a shadow on it's left edge making it appear raised off the ground. 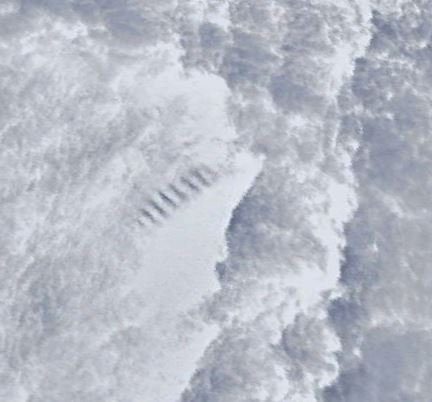 I did not want to start a whole new topic but I was searching out by Primm Nevada and came across this a true WTF its by 3 Huge Solar towers the ones with like 10000 mirrors focusing on the tower and looks like it took a huge amount of something to make this .. Any Idea? 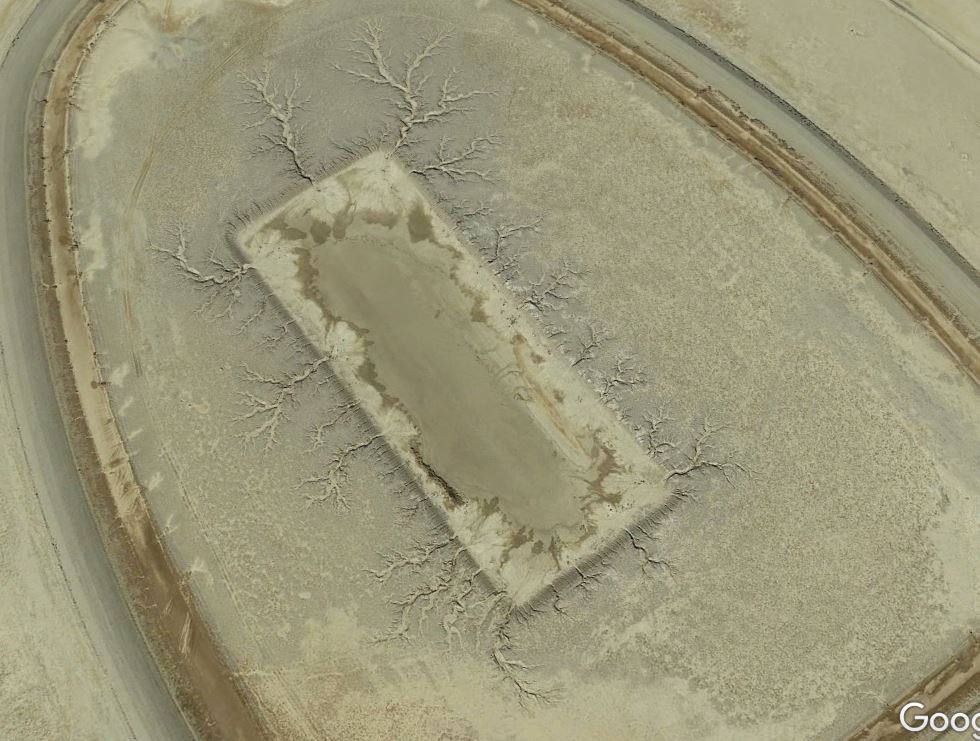 
I was searching out by Primm Nevada

Looks like a settling pond, possibly from the Mountain Pass Rare Earth Mine just down Rt 15 a piece...

The Mountain Pass Rare Earth Mine is an open-pit mine of rare earth elements ( REEs)... the company began piping wastewater as far as 14 miles to evaporation ponds on or near Ivanpah Dry Lake, east of Interstate 15 near Nevada.

Hi. also don't want to derail, but I think that last pic looks like it was made to collect and store rain?? Well, it at least looks like it's been collecting rain, whatever it is:/

Oh, I almost forgot, that snow drift, the one you posted, I dunno dude, but that just looks like something to me.. just in front of it, to the left is a rectangle looking thing..

lol. I had the page open for some time while cruising around google earth, only saw your post once I posted..

But those big veins coming off it are on top of the ground and looks just like a huge amount of electricity got off loaded into it?

But those big veins coming off it

Or rivulets of water overflowing the banks of the central pond...

Did some more checking on Google Earth, the feature was built between 1986 and 1987, it pre-dates the solar farms by more than 20 years...sorry, nice find though, lead me to the Mountain Pass Mine and the Coliseum Mine, also backtracked the pipe routes to two abandoned pumping sub-stations
edit on 5/24/2017 by Wreckclues because: Additional content

Seriously man you need to see a shrink or something. Your like those that see shapes in clouds except you'd believe a giant bunny actually lives up there. This is not meant to be factitous, it's meant to be a wake up call before you descend into hearing voices and harm someone because it all starts will seeing things that are not there.

Oh by the way, there is a big rock in the USA that at a single angle looks like a penis. Of course that means that a single angle view proves that in fact the rock penis is actually part of an excited rock man lying under the earth.

Get some perspective.
edit on 26-5-2017 by SanitySearcher because: (no reason given)