Transfered half of by Bitcoin/Ethereum holdings over there.

I get to trade crypto over there, and don't need a lot of capital to do it.

Already made gains this month and came out a head.

Although I am in it for the long haul.

Went to another website Poloniex. It's just and exchange. 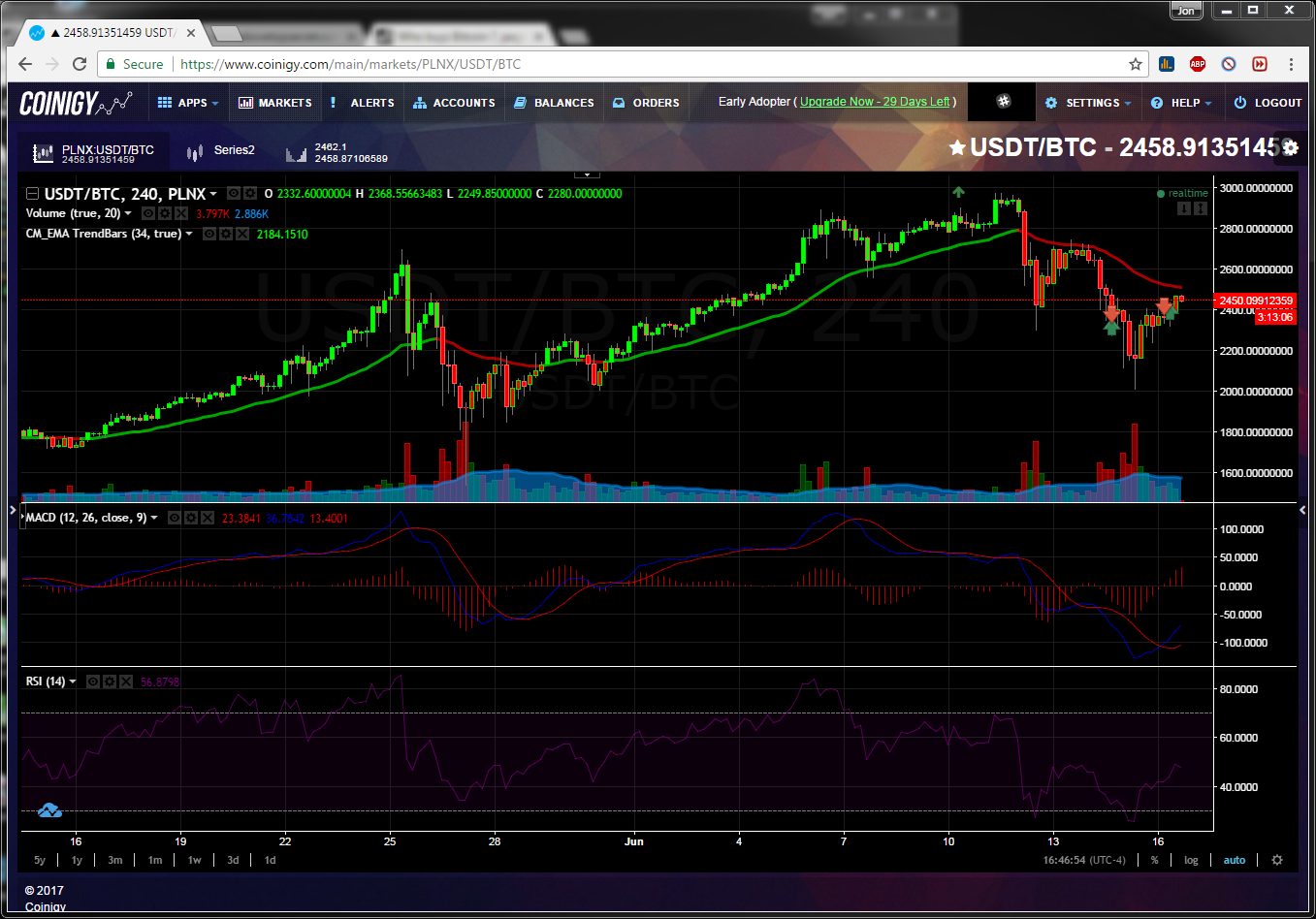 As you can see the trend is still strong.

That's the 4 hr chart bought when it was oversold.

It was stupid easy to get started.

Transferred some of my bitcoin to get started.

After last night transferred it off with no problems to my Exodus desktop wallet.

posted on Jul, 22 2017 @ 10:36 AM
link
I know a very good article on this topic. Here: bitcoinbestbuy.com... It is very detailed written about the processes of buying bitcoins

originally posted by: verschickter
I bought some when it was 25€ per Coin. Printed it out so not to loose it.... guess what...

You were pulled over for going too slow in the fast lane?

All this makes me wonder....about when you are not rich, and against better judgment,
decide to leave the building.

Can a pig's dog find, and 'sit' on a bitcoin wallet, causing you to surrender your sole form of wealth, as happens when a pig pulls you over when you are not wealthy, and get caught with dollars?

If the crypto currency is printed out, as you relate, I assume it is like bearer bonds, or cash.
Except...are dogs trained to find the scent of the printed out receipt? Maybe I should just disguise it as a
wooden tennis racquet that is, beneath the crazed enamel, solid 24 carat gold, because no pig has any use for exercise equipment. It would be invisible to them, unless it had drugs inside, some opening they could pry off it.

It is hard to imagine any law against spray painting a solid gold tennis racquet to
appear as though it's a vintage Ralston Match Play.

For once I am not joking. The Police Gang in Amerika are like a predatory cancer. If they interact with you, you are shot dead in any number of ways. Unlike any other group of bandits, the courts are in sick collusion with their piracy and bloodshed.


I wouldn't personally worry about being caught with cash, if I weren't to miss it when a pig steals it, but this is not the case for myself and also for most Americans. Try taking a rich bastard's cash and see how far you get.

Remember...To him that have not, pigs just take it all. This is because pigs think they are God.

Oh are they in for a surprise when death swallows their ass.

originally posted by: Aspie
a reply to: neo96

Yeah I sold before the last fork.

It shot up crazy.

Waiting for another massive selloff to rebuy.

Obviously I lost it, just like the plot of my sentence suggests.

posted on Sep, 1 2017 @ 12:11 PM
link
Bitcoin is just a fake commodity and it has the potential to become the biggest bubble in history.


originally posted by: Aspie
a reply to: neo96

Yeah I sold before the last fork.

It shot up crazy.

Waiting for another massive selloff to rebuy.

Hmmm, I thought you were in it for the long haul — you know, dollar cost averaging and all?


Dollar cost averaging and long term it can pay off.

Yup, at $5700 this morning it looks like simply holding onto to it for 90 days would’ve paid off nicely...not some pump and dump. The long wait...Doh!

Really? Lookup zelle and get back to me.

posted on Oct, 15 2017 @ 03:11 PM
link
I buy Bitcoins. I've even recently bought a Nano S Ledger hardware wallet and so far am very enthused with it. For those who is interested in hardware wallets, be sure to read these reviews - www.beautifullife.info... . Quite informative!

Bitcoin is up $15K since I created this thread.

Bitcoin is up $15K since I created this thread.

Almost a year later, how is it all playing out for you?

Dude is all bark and no bite. Claimed he wasn’t gonna pump-and-dump, does exactly that and moans about lost ‘opportunity’. I’ve told my bitcoin story, this guy is just a dragon-chaser. I’m sure the protecting 2nd amendment had something to do with his “do as I say, not as I do”.

Root around enough, you’ll figure it out — both our post histories are in the public domain.