A federal court has thrown out the civil rights lawsuit filed by the family of the Irving teenager known as “Clock Boy.”

The lawsuit alleged that the city of Irving and Irving school district discriminated against Ahmed Mohamed at Irving MacArthur High School in September of 2015.

Police originally said Mohamed was not very forthcoming and the school as concerned that the device was possibly the infrastructure for a bomb. Officers acted in an abundance of caution.

“It was a very suspicious device. We live in an age where you can't take things like that to school. Of course we've seen across our country horrific things happen. We have to err on the side of caution," Irving Police Chief Larry Boyd told FOX 4 in 2015.

Well, how many appeals will this family make, and drain the taxpayers of even more money. Seems to me this is the plan now...hurt the "Great Satan" by spending his money and trashing him in the press.

Enough already. He was not a special boy, he did what anyone with more brains than a sea cucumber could do. Yet, because of his religious background and beliefs, he is hailed as some "genius" or something.

I say, enough of that crap.

It's good to know that some frivolous lawsuits still get thrown out.

This was always just an opportunity to 'cash in'.

originally posted by: ware2010
a reply to: Krakatoa


originally posted by: ware2010
a reply to: Krakatoa

posted on May, 19 2017 @ 04:25 PM
link
At the time, I saw a picture of his clock and thought, "Damn, that does look like a bomb!"
Regardless of what the boy did or did not intend, he built something that for all the world looked like a bomb.

Well unless you heard otherwise the court fees will be taxed to the losing side in a case.

So I'm guessing the family that filed the suit will have to pay up eventually.
It's probably under a few thousand dollars anyways.

I don't normally consider a meme to be a proper response in and of itself; however in this case, I'll make an exception: 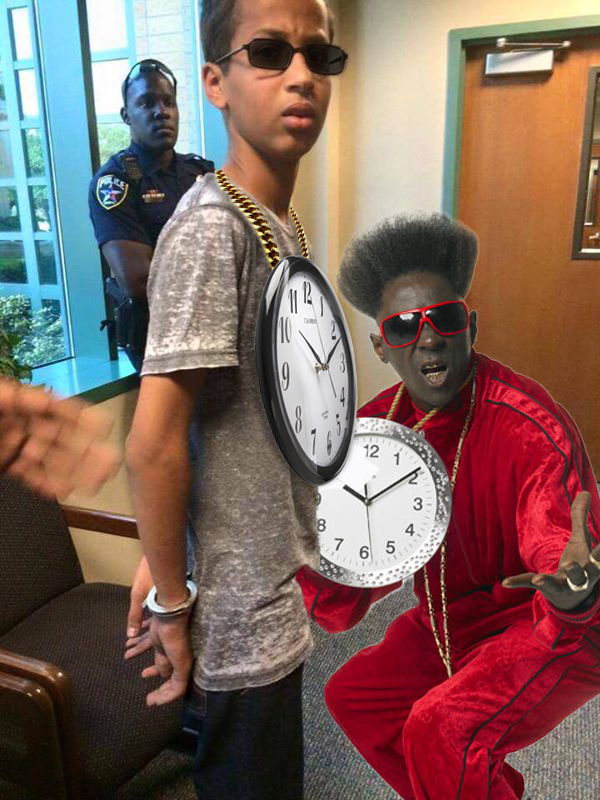 originally posted by: SR1TX
The responses to this case are rather troubling.

Not at all. But, had he not been of that faith, I do believe this would not have made it to the point of him being invited to the flipping White House to visit the president, or held up as some genius kid inventor. Had he been of any other religion (or none), I honestly believe he would have been charged with a crime and likely expelled from school. And not even considered a visit to meet the president.

What I have a problem with is not him or his religion. But the overly overt manner in which he was coddled and praised BECAUSE of his religion, when that would not be the case otherwise in any other case.

posted on May, 20 2017 @ 08:49 AM
link
What he made does not look like a bomb or IED. It looks like what you would find in anything electronic (not made as well). Now if people saw the outside of it and it's display, they are just assuming out of fear. This world is turning into the society in the movie idiocracy.

Ok, I'd really like to address this. First, kids across the country have been suspended/expelled for swiss army knives and the like and we don't hear about it because it doesn't push the proper agenda. Secondly, let me quote from the transcipt of an msnbc interview (I'll post the link afterwards)

AHMED MOHAMED: I took it to school to show my teacher of the talent that I
had. I showed it to my first period teacher, she`s an engineering teacher
that teaches at McCarthur High School.

HAYES: And you`re in that class?

HAYES: Another teacher was not so impressed with Ahmed`s invention however
telling him it looked like a bomb. That afternoon, Ahmed was pulled out of
class, arrested, handcuffed in his NASA t-shirt.

So even after this kid was told his "talent" looked like a bomb, he still proceeded to open it in a later class and activate the alarm. Now why would he do that?

He was treated like a hero in the wake and still that wasn't enough. No I don't think much of him and his family.

(Although I will say this-- no 14 year old should have his face splayed all over the news to promote an agenda. Disgusting.)

originally posted by: SR1TX
The responses to this case are rather troubling.


Religion has nothing to do with this...
This kid and his family are garbage.


originally posted by: SR1TX
The responses to this case are rather troubling.


Religion has nothing to do with this...
This kid and his family are garbage.

Seconded. Leave it to the other side to try to pigeon-hole the religion into something that has nothing to do with religion. Just like they can't help seeing everything involving multiple ethnicities through lenses of color. They are the true racists and bigots. They see it everywhere, even when it's not actually present.
edit on 20 5 17 by face23785 because: (no reason given)

posted on May, 20 2017 @ 11:53 AM
link
Zosimov, maybe he opened it up to prove it's not a bomb. He is smart enough to know it is not, he was proud of what he made and figured others would know what it is. Just because one teacher suggested it looked like a bomb, I doubt the teacher told him it was not allowed or that it could get him in trouble. Smart people should not have to succumb to ignorant people. I feel this would be like a kid of any colour bringing fried chicken to lunch and because there are black kids present, it is racism/hate crime.

Also, just so you know, I am for closed boarders but I am against assumptions made through fear. It is much easier to see that his project is not a bomb than it is to read minds and find out if the new comers are ready to get their 72 virgins.

Edit: what happened after he got in trouble was on his parents and the media, I could care less about all that fecal matter. That teacher that ratted him out was the one blowing it up all out of proportion.
edit on 20-5-2017 by XL5 because: clarity