The Orders and Functions of Angels 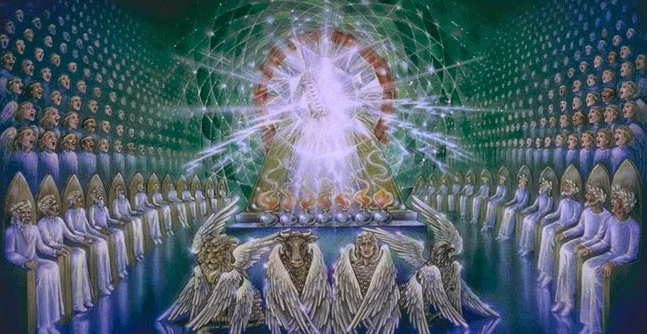 Fellow and Past President

In the Volume of Sacred Law, there are about 210 references to angels. One example is the mention of two cherubs on the cover of the Ark of the Covenant. It is said that they have been here “from the beginning” and that it’s important for us to learn as much as we can about them. This thread will present some interesting “facts” that you may or may not know about the existence of angels. Please do not shoot the messenger or assume that care whether you believe or not.

Angels are said to be “pure spirits.”

They are “immaterial intelligence” that we would label an energy field.

Their “bodies” are made of light (Light Bodies, duh).

An angel’s mind can make people think they see them in human form.

They can make people see them with or without wings.

Angels do as their mission dictates.

In human form, angels do not perform any related functions, such as eating or drinking.

A single angel cannot be in two places at once, nor can two angles occupy the same space at the same time.

Higher Orders of angels vibrate at a faster rate than those on a lower Order.

Eating or drinking terrestrial products will contaminate an angel, causing them to suffer a loss of vibration.

Increasing their vibration back to normal is said to take a while.

Each angel group is a complete species.

Each angel may move to a higher Order or vibration in order to provide superior service after many millennia.

Humans may move up to be an Ascended Master, but would hardly become an angel until the next life wave.

They may know a short time into the future as this knowledge is sometimes needed for their mission, dictated by God.

There are three major categories of angels, which are called Hierarchies.

Each hierarchy has three categories known as Orders.

Fallen angels also have their own Order or classifications.

All angels communicate psychically with God and pass the orders down to those who are to perform the duty.

They do their work as directed, but it is the God energy that actually performs any alleged miracles.

We call them “miracles” because of our lack of knowledge regarding all of God’s laws and how they work.

Many current inventions that we see today would have been seen as miracles a hundred years ago.

So, now that you’ve had a primer, are you ready to really have your mind blown? For the sake of clarity, I will present the rest of the document as it appears, but in picture form. If enough interest is shown, I will create a disposable link that allows others to download the PDF. I'm sure that you can find it on your own if you look hard enough. 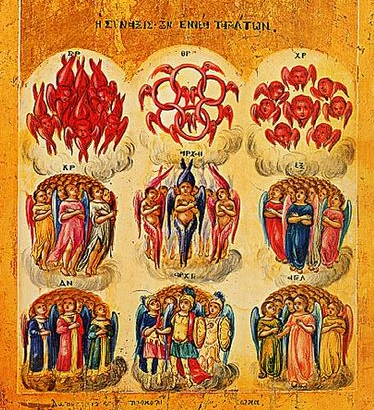 The Shemhamphoras (The 72 names of God)

Other Spirits (You’re all not crazy)

Do we have any real evidence for the existence of angels?

Angelic function is based on power and light. Something where there is little choice. The Angel sheds light from the function

Angels are based on Light and Power

From our Master Jalaludin Rumi

I have experienced seven hundred and seventy mounds.

I have experienced seven hundred and seventy mounds.

I died from minerality and became vegetable;

And from vegetativeness I died and became animal.

I died from animality and became man.

Then why fear disappearance though death?

Next time I shall die

After that soaring higher than angels-

What you cannot imagine, I shall be that.

I remember the first time I read the Book of the Watchers and was blown away by the details provided therein leaving me wondering if I just read an awesome peyote' inspired tall tale or an actual eyewitness account of interactions with non-terrestrial beings who took him on a star trek.

This will keep me busy for the next few days

Thank you for the effort.

There are many ancient depictions of angels and their attributes, from many different religious traditions.

Why would we take the word of a late 20th century organisation that proclaims it has no particular religious affiliation, in instructing us on religious topics?

Do masons have exposure to and experience of angels that others don't? If not, where does its information come from? From what I have read in the OP, I would assume that the masonic ideas are simply a restatement of previous accounts.

Were the previous descriptions of angels lacking in the first place?

originally posted by: dfnj2015
a reply to: eisegesis

Do we have any real evidence for the existence of angels?


I wish there were real evidence! Once, when I was in my 20's, I was driving home late at night (2am) and guess I feel asleep at the wheel. All I know is I heard a voice call out my name real loud, and I guess it woke me up...just in time to hit the brakes - because I had crossed a ditch and was just getting ready to hit a telephone pole!! I didn't drink or do drugs at that time, well, or rather at any time lol. And, I was alone in the vehicle! So, I have always (assumed?) maybe it was my guardian angel. I don't know what else it could have been!

And by the way, very interesting topic...I plan to read all of the links you have provided!!
edit on 14-5-2017 by TruthJava because: wanted to add more

posted on May, 14 2017 @ 08:11 PM
link
The Watchers were not Angels but probably Jinn. Powerful beings between Angels and man.

In the oriental languages that mention angels, the meaning therein is Messenger, through the light, and King (Malak) which denotes Power.

Amongst the JINN was Satan.

However, not all the Jinn are devils.

An Angels function is to do God’s will, not misguide human beings.

Angels get their knowledge through light (Messenger) , and serve God through Power (King-Malak-Hebrew-Arabic)

18. Israfel( Angel of the Ressurection0

Great work OP and everyone else!

Got this one saved for later

My friend you continue to enlighten with your insightful threads!

I have thoroughly enjoyed your posts since I have taken a hiatus from posting here and this thread is a case and point as to why I find myself consistently pulled back.

In an space of infinite knowledge, any and all signs along our path of remembering our true nature, call to us to stop and smell the roses.

posted on May, 15 2017 @ 02:19 AM
link
I just do not agree with the concept that they are intelligent. Neither will be right to call angels "them". And who the heck have to mess angels with vibrations? Newagers? Not that is ultimately wrong, but by doing so you are inviting the spirit of confusion and meaninglessness within a structured theory of some sort. Isn't that higher and lower are purely HUMAN concepts? Why to mess unessential concepts with the essential ones?

What is the purpose of this thread after all? I mean... it's very fine and will compiled presentation of some sort... Just what is the motive and what the purpose? To present the reader with the ramblings of some religious "scholars" without giving any cognitive direction? Or it tries to explain, shed light, deconstuct, make remarks, theorize and such, upon the well and over-well used cliche of "the angels". If it was the latter case, I would be satisfied, yet I see it's the former, which personally perplexes me a bit. The question is like in most crime books. What is the motive???

And don't take my word personally, take me just as the angel of self-discipline. A 108 degree angel.

Sharing knowledge is the only motive some need.

Is it possible that reincarnated people are angels in deep cover?

posted on May, 15 2017 @ 09:59 AM
link
Thank you for this thread.
The last paragraph of the summary is absolutely true ...so glad others are able to read this and I hope it can sink in.

The evolution of the spirit through mineral, plant, animal, human, angel/ethereal, and finer vibration 'bodies' until finally uniting with source is a miracle, but incomprehensible to the masses

What a beautiful cosmic Lila (play)! There really is no death for us in truth. Make up your mind to be happy, it really is a choice. Every single one of us has angels watching over us right now. Honour them.... they are just behind this gross vibration, but are more real than you and me. Lift your vibration through clean living and high thinking. Meditate on stillness and merge into that peace - it is your real nature