What is white privilege?

page: 1
28
<<   2  3  4 >>
log in
join
share:
openminded2011
+4 more
posted on May, 13 2017 @ 10:49 AM
link
After reading several posts on the subject, I realized that there is always this assertion of white privilege, but no real concrete examples to back it up, the examples that are given are unusually anecdotes of discrimination, which really falls under bigotry and not implication of some sort of privilege for white people. So here is your chance, please give examples of what you consider to be white privilege in modern society. I should concede that I do not believe it exists; the vast majority of white people in 2017 are struggling to survive just like any other group or race of people. But I would like to understand the perspective that I am somehow privileged; that I get some kind of perks because of my skin color. Again, do not confuse being the victim of bigotry with the implication of white privilege. There is bigotry against white people as well, so they certainly do not have privileged status in that case. Please enlighten us with your definition of white privilege.
edit on 13-5-2017 by openminded2011 because: (no reason given)

Minorities have to give me their spot in line.

They don't have to know.

When you find out let me know been looking for it 48 years now.

White privilege, like chicken teeth and rocking horse sh!t, doesn't actually exist in reality - it exists in the minds of those folks so butthurt because they lost the fight / race / war / cooking competition / other and have decided to vent their frustration towards the big bad whitey.

A hetrosexual single white male has the most privilege - apparently. 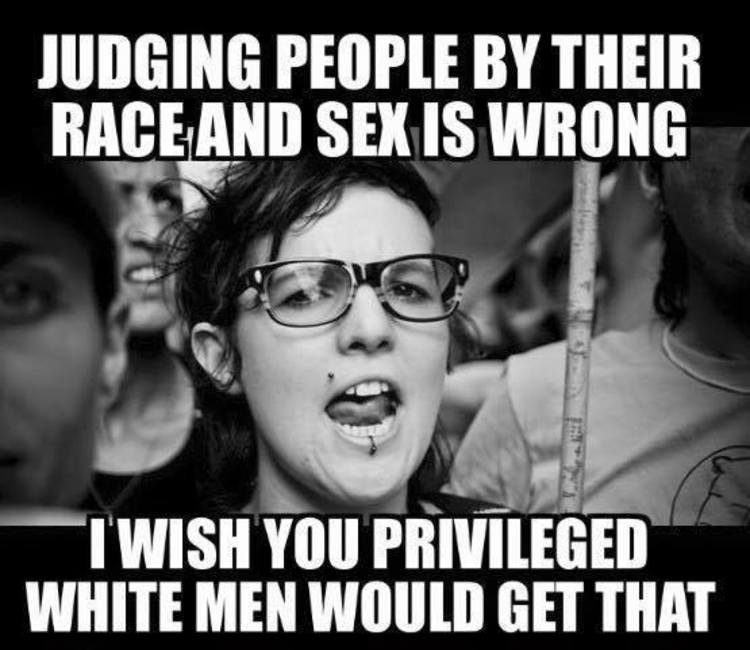 But anyhow, there was a fairly big thread about this a couple days ago. sort of done to death. Ultimately, there is inherent benefits in any society where you are the majority, be it white, asian, latino, black, etc. You can call that majority privilege I suppose...but in the west, no person has a legal better standing than another (well, women do in some areas, but thats a different topic)
edit on 13-5-2017 by SaturnFX because: (no reason given)

The beginning and end of Western civilization.
edit on 13-5-2017 by 0racle because: (no reason given)


It is an oxymoronic term that actually means "black discrimination.."

Because obviously a poor white person in America isn't privledged..

Why the left tends to choose to put logical fallacies right in the title of issues where imho they are in the right... I have no idea..

Well or I guess it is the short sighted view of knowing they will energize a certain percent of the population by putting "black " in the title even when it is not a black only issue..

Take black lives matter.. obviously police shootings are not a black only issue.. so good luck fixing it by only looking into black cases..


I almost think it is on purpose... so the problem persists which keeps activist groups in business..

One cannot dismiss the historical racial discrimination aspect within society and white people's personal poverty stories don't speak for the whole of society.

The theory that white people are more likely to benefit from a historically white Civilisation because they are white.

originally posted by: CulturalResilience
A myth, like male privilege.

Does every single poor white trash , white person get some benefit that no one else in America gets...

No.. cops slap around trailer park kids just as fast... judges throw the book at them.. they will be lucky to find a decent job..


I think a more accurate description is that black people are treated like plain white trash on average..

posted on May, 13 2017 @ 11:21 AM
link
The demographic of the crime rate statistics cannot be dismissed. Particularly when White crimes are not counted together with Hispanic ones.

It's a race theory proposed by feminist and activist Peggy McIntosh.

It is same old white supremacy disguised as progressive thought, and dressed in activist language.

A few definitions from Urban Dictionary

The racist idea that simply being white benefits people in some unexplainable way, and that discriminating against white people is not only okay, but enlightened and necessary.

The excuse some extremists use to justify pretty much any level of racism, as long as it is coming from someone identifying as Non-Caucasian.


Essentially it's the claim that being White affords one access to universal, institutional or systemic advantages, used by any other ethnicity (who use the code-word "anti-racist" to disguise their intentions) to justify overt racial discrimination against people who look white, in the hopes of equalizing social and economic outcomes between races.

If you question it you're called "ignorant" (in reality you are a skeptic), and the fact that you questioned it in the first place is used as further proof that you have "White privilege".

The privilege of having your own children brainwashed by the schools funded by your tax dollars, and told that your people are evil, and that they should be ashamed of themselves and their ancestors.

The misconception that somehow whites have more benefits than other other races, which is used to guilt whites into feeling shame for things they are powerless to control.

posted on May, 13 2017 @ 11:24 AM
link
Isn't it time to ask non-whites their take on how white privilege shows itself within our society?

originally posted by: Sublimecraft
a reply to: openminded2011

White privilege, like chicken teeth and rocking horse sh!t, doesn't actually exist in reality - it exists in the minds of those folks so butthurt because they lost the fight / race / war / cooking competition / other and have decided to vent their frustration towards the big bad whitey.

A hetrosexual single white male has the most privilege - apparently.


Considering that before the last 50 years, only white males inherited ANYTHING from their fore fathers labor..

No black person was handed down properly, or a business, or a trust fund..

While white male wealth has been in the same old money families for centuries some times..

Obviously the ramifications of that do not just go away in a generation or two..

How many black people will inherit money today?? 5% maybe.. while I bet that number is closer to 40% for whites.. maybe higher..

In a world where cash is king.. that is all that really matters..