posted on May, 12 2017 @ 05:54 PM
link
So, this happened to me yesterday afternoon around 5pm, East Coast Australia time.
I was in my study and heard loud bird chirping coming from the front door. I live in a two storey house, the front staircase leading off an open front porch. Next to the stairs and blocking my view of the street is a clump of thin palm trees (each trunk no more than four or five cm thick, although they are quite tall and small fronds provide some privacy from people walking down the road).

Anyway, I went to the front door to investigate and saw about a dozen small birds flying wildly around the tree clump at the second storey level. I often go to that porch for a smoke and I'd never seen a flock of birds show any interest in that particular bit of greenery.

On closer inspection, I noticed that it wasn't just a flock of one type of bird, but at least three. None of them are uncommon, but I could identify a small nectar drinking variety, a larger species (both male and female were present, judging by the plumage) and a third type, slightly larger still, with a crest on it's head. Something was greatly agitating them all, they were chirping loudly and fluttering wildly every which way.
Then, one of them spots me and flies right at me, stopping about a meter away and hovering, chirping loudly right at me. It retreated after a few moments and another took it's place, doing exactly the same thing, hovering in place and chirping at me aggressively.
And then a third and then a fourth.

By this time, I'm pretty stunned. I'd never had anything like that happen to me before and the surreality began to sink in. After about five minutes, I contemplated going to get my phone to start recording, but whatever was happening, I didn't want to miss any of it. Now, I do have cats, but none were present and the birds didn't seem to be scared of any sort of predator that I could see...but they were very interested in me and continued to take turns flying under the porch, chirping at me for a bit and then returning to the branches. Different species of birds. No nests in that particular clump of trees and again, they have never taken a particular interest in that area before.

I would say that about ten minutes passed in total from the time I went to the porch until all the birds suddenly decided to leave in unison. One little nectar drinking bird hung around for maybe another minute before flying off as well.
On a hunch, I checked the national earthquake reporting service, but no luck, our last quake happened over nine months ago.
Snakes could be another possibility, but why would these three different species of bird all congregate in one small clump of trees and the proceed to...chirp at me?

Any ornithologists, professional or amateur happen to guess as to what that whole thing was about? 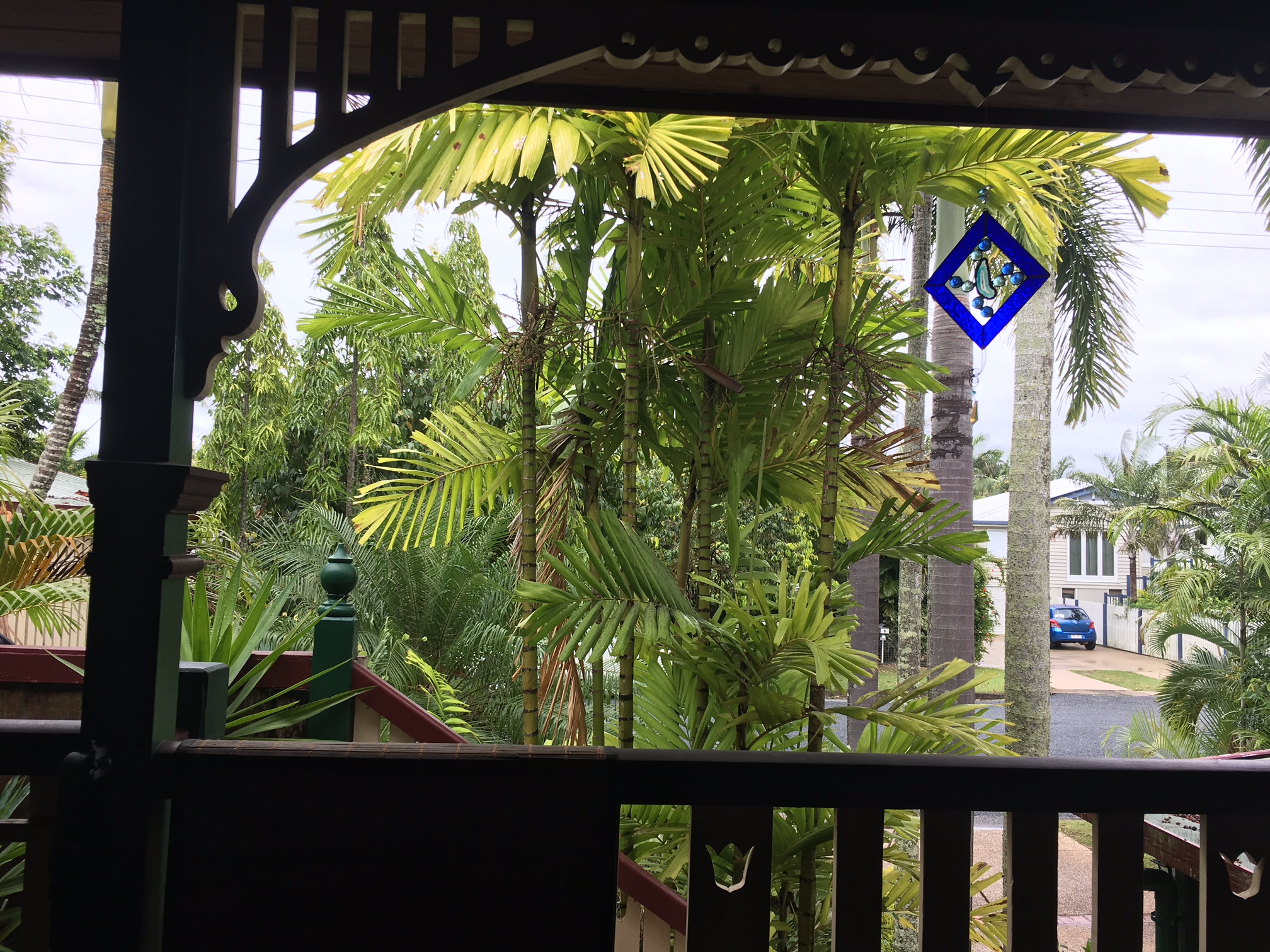 Pictured: The tree clump in question.
Not pictured: Insane birds.
edit on 12-5-2017 by Unresponsible because: (no reason given)

posted on May, 12 2017 @ 06:20 PM
link
We actively feed birds of all kinds. Hummingbirds will do this to me. When I'm sitting outside they will come right at me and hover in front of my face and look right at me. The first time this happened I was frightened thinking they might attack, but they never have. They sound kind of like bees close up. But after I got used to them I figured they were just checking me out and came over to say "Hi." They can be very aggressive if they have a nest in your flower pot.

Try talking to them ?

Did you look to see if there was anything in the tree?

Seems they were trying to get you to go look and see for yourself.

for the crazy story!

My bet, from long years of experience is that there was something, possibly a snake, in that tree. We live in the country with lots of trees. Multiple kinds of birds will congregate and screech warnings if there is a snake or any kind of predator. Owls, hawks, even crows sometimes get this sort of treatment. I once saw them deviling a raccoon that had climbed the tree to find a place to snooze. They assumed it was after their nests I suppose.

posted on May, 12 2017 @ 07:10 PM
link
They were definitely warning you to stay away from some nest; probably one you couldn't see. Birds don't usually interact at all with humans unless you are feeding them and they need more food. Like at the beach when they swarm when you throw leftovers for them to eat then afterwards fly away in search of more food.

By the way, really pretty pic-where is that?

Nothing that I could see, I know that snakes can be pretty stealthy, though.

Yeah that's really the only explanation that makes any kind of sense. But they don't really seem to nest in that area, usually I only see one or two in my back yard, drinking out of flowers or nibbling on palm tree berries. Never a flock before and never different types all hanging around together like that.
I agree though, I'm starting to lean towards a hidden snake as being the culprit. They are hard to spot sometimes.
edit on 12-5-2017 by Unresponsible because: (no reason given)

I don't think they were nesting, there's no sign of them now, nor before the incident.
Thanks! I live in a small rural town in Queensland. Lots of rain lately, so everything's nice and green.

I'll have to brush up on my accent, I'm fluent in seagull but inland birds sound weird.

Seriously though, that's a cool article. I suspect birds and humans have a bit in common from a deep psychological standpoint, being as we're both genetically wired to form social groups.

posted on May, 12 2017 @ 08:08 PM
link
a reply to: Unresponsible
They might not be nesting in those specific trees but nearby. Ours go nuts when the cats just walk across the yard when it is nesting season (as it is now), dive-bombing the cats or even dogs sometimes. They even go for tiny snakes, snakes that couldn't possibly eat their young. I saw them going after a tiny green snake (they are called grass snakes here) that was just slithering along in the yard. Here it is usually the blue jays that start the "Danger!" calls and others come to join in.


Fulcanelli's main point, the key to unraveling the larger mystery of alchemy and the cathedrals, lies in an understanding of what he calls the "phonetic law" of the "spoken cabala," or the "Language of the Birds." This punning, multi-lingual word play can be used to reveal unusual and, according to Fulcanelli, meaningful associations between ideas. "What unsuspected marvels we should find, if we knew how to dissect words, to strip them of their barks and liberate the spirit, the divine light, which is within,"

Kind of hard to hide in a palm tree!

Thanks! That was my first impression that they wanted your help.

You have a beautiful view from your porch.
Seems very zen.

Yeah, it's a pretty chill place to step away from the electronic nonsense every so often.

Interesting read so far; just quietly, while this was happening, I was reminded of Jung and his allusions to certain strange events.
Unsuspected marvels indeed.

posted on May, 12 2017 @ 08:52 PM
link
I have come to the conclusion that because birds are very commonplace, that most don't take too much note of them.

But, after having a lot of birds (and other animals) start hanging around my house, I have really been taking note of them and observing them extensively.

What I have noticed is that there are some things that must make perfect sense in bird land, but completely baffle me. I think they are absolutely fascinating now, even more than before.

Around here, we have Stellar Jays, Crows, Magpies, several smaller song birds, typical birds of prey (hawks, falcons, eagles) and a lot of hummingbirds. By "a lot," I mean that we can literally go through gallons of "nectar" in a single day.

Anyway, all that yammering to make the point that if you find this interesting, maybe start exploring the world of birds? Really all you have to do to start is feed them, literally anyone can do it.

With the right approach to exploration, you could find out exactly what they are doing! Maybe even find something new? Who knows, maybe they'll even start communicating with you.

posted on May, 12 2017 @ 09:12 PM
link
The story sort of reminds me of when I heard the cardinals going completely berserk, so I went to investigate what the problem was, and there was a possum climbing up a very large bush, where they had nested, presumably to eat their eggs. My terrier intervened in the situation but it ended well. Everyone lived.

Something was "off" in your situation too, I suspect. Maybe there was a nest.

Yeah, they are pretty fascinating creatures. I'm not a huge bird watcher, but in my area, it's impossible not to take note of them from time to time.
Every year at the end of Summer, the big mango tree in my back yard is home to an unkindess of Australian ravens who come by to nest. What made this year particularly interesting was that a stormbird (channel-billed cuckoo, the largest variety of cuckoo in the world according to wikipedia) had laid it's egg in the nest; one whole month of the most freaked out squawking anyone's ever heard coming from that tree, dawn to dusk and the ravens desperately trying to feed this great white bird that was bigger than them.

You're right though, I probably need to start getting into bird watching as a proper hobby, if only to know what the hell's going on half the time.

posted on May, 17 2017 @ 04:05 AM
link
I had once,such a strange encounter with birds.Black birds with orange beaks.I was sitting in my fave spot in my jungle garden when about 20-25 of them arrived.They arranged themselves on tree branches above me and were All staring straight at me like spectators at a sports event and were "talking at me" loudly,never taking their eyes off me.This went on for a few minutes then they suddenly all took off and left.A puzzling but amusing interaction
edit on 17-5-2017 by Raxoxane because: (no reason given)